The Poverty Of Statistics 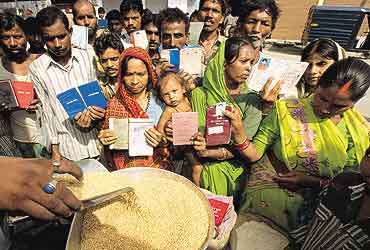 outlookindia.com
-0001-11-30T00:00:00+0553
Was there a deliberate attempt by the Vajpayee-led government to scale down the poverty ratio and downsize the number of people who fall under the below poverty line (BPL) category? According to information accessed by the rural development ministry from its own records, there was a well-planned downscaling of those who fitted the BPL criterion, particularly in rural India. The ministry estimates that over 500 lakh poor who should have been on the list were excluded and thus denied access to subsidised rations and development schemes. With the new government's focus on rural India, a revised and more realistic estimate of the poor will soon be drawn up. Rural development minister Raghuvansh Prasad Singh confirmed this to Outlook: "We'll get a fresh survey conducted and a new BPL list will be made."

How did the previous government manage to exclude five crore of its poor? Trimming the number of people eligible for BPL benefits began immediately after the NDA government announced in 2000 that national poverty levels had declined significantly—from 37 per cent in 1993-94 to 27 per cent by 1999-2000. This estimate was based on a Planning Commission report, which in turn relied on a National Sample Survey Organisation (NSSO) survey. Once the government made this statistic official, the rural development ministry sent a set of recommendations to state governments on how to draw up a new BPL list which would take into account the 'drop' in poverty levels.

Poverty levels were fixed for each state and region. The new BPL list was not to exceed the ceiling determined by the Centre. Thus Delhi state was to have no more than 3,900 covered under BPL! Rajasthan, a drought-stricken state, had 15 lakh as its upper ceiling, Punjab 2 lakh. With predetermined figures of the very poor fixed by the Centre, the survey conducted by the states was to be a farcical formality. Points out Singh, "In the Integrated Rural Development Programme (IRDP), many of the deserving people were simply excluded for no fault of theirs. The manner in which the survey was conducted was simply unfair." The methodology employed was as under:

This system, says economist Utsa Patnaik of Delhi's Jawaharlal Nehru University, was arbitrary and had inbuilt flaws. Thus, the average monthly income of a household was not taken into account. In considering land, a sharecropper/tenant farmer was treated on par with the actual owner. No distinction was made in respect of quality of land; a rocky terrain was treated at par with a fertile plot.

According to Patnaik, ranking on the basis of clothing gave a person with a few clothes the same number of points as one with several acres of land! The food security parameter had a like discrepancy; a household with one square meal a day got two points, the same as one with two or more acres of irrigated land. Under sanitation, a BPL family with a house under Indira Awas Yojana got full marks for having a toilet, more than a richer person who defecates in the open.

Field reports from voluntary agencies, submitted to the Supreme Court in January this year with a public interest litigation filed by the People's Union for Civil Liberties (PUCL), raised some crucial issues about the BPL survey. For example, reports from the Shivkar panchayat in Barmer, Rajasthan, showed that persons with land holdings of a hectare and getting two square meals a day had made it to the BPL list, while those barely managing one square meal a day were dropped.

In its affidavit before the apex court, PUCL stated that reduction of the number of BPL families was unfair because the poverty ratio fixed was far too low and was unrealistic in the first place. Points out PUCL general-secretary Kavita Srivastava, citing National Family Health Survey reports: "There is no doubt that much more than 37 per cent of the population is undernourished. What is required is a major expansion of the BPL quota."

With BPL figures trimmed to 488 lakh families nationwide, the offtake of subsidised foodgrains saw a sharp decline in 2002-2003. This led to the government exporting excess stock from FCI godowns. Last year, the worst drought year in two decades, the NDA government exported a record 12 mt of foodgrains. It continued to export a million tonnes a month, bringing the total exports to over 17 mt by November 2003.

Even stocks channelled through the targeted PDS scheme officially showed insufficient demand. This was courtesy large-scale diversion of grains which were sold in the open market, the exclusion of the real poor and denial of ration cards even to many of those included in the BPL list. Less than 10 mt was sold in 2000-01 through the PDS, compared to the 21 mt in 1991.

The rural development ministry has its task cut out under the new government. To clear the mess it is confronted with, a new survey will have to be conducted to cover the poor left out of the loop. That done, it will have to revamp the PDS to render it far more accountable.