The Positive Power Of Despair

A school for kids of remote Himalayan villages. A school for Bhil-Bhilala children in the Vindhyas. People chasing dreams, despite the despair. No, idealism isn’t dead. 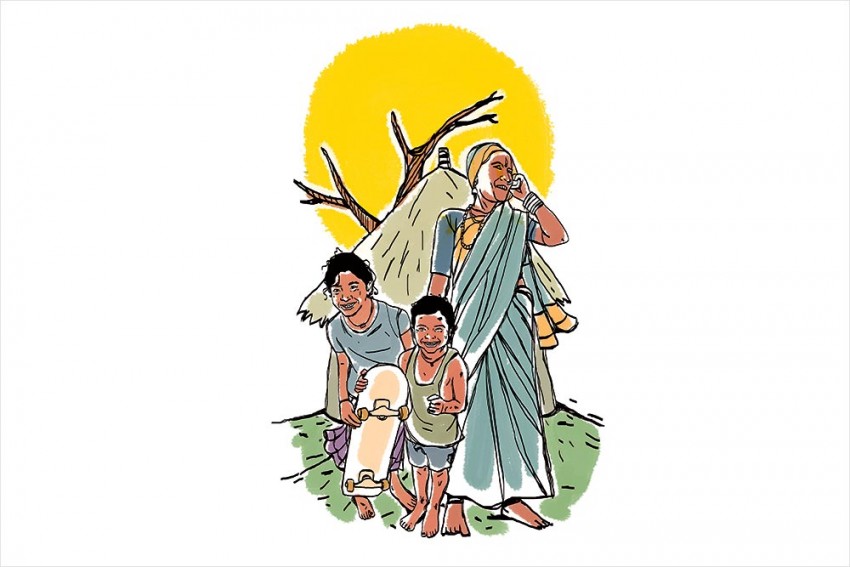 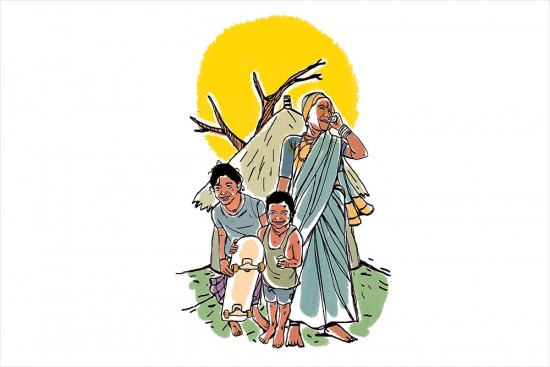 “Now it is all integrated, my work and my life,” Mannan Gupta told me. “What do you mean?” I asked him. In respo­nse, he spoke these words, touching a common core somewhere: “When I was working at a technology company as a newly-minted engineer, fresh out of college, I felt my personality had split into two. I was someone else at work. My interests and personality were irrelevant during office. I had a good package, but I felt numb.”

I first met 26-year-old Mannan at the Social Media for Empowerment (SM4E) award ceremony organised by the Digital Empowerment Foundation in Delhi this year. Along with Asha Gond, a 12-year-old Gond adiv­asi child from Janwaar, near Khajuraho in Madhya Pradesh, and Ulrike Reinhard, the German founder of the Janwaar Castle project, Mannan was here to receive an award for promoting social change through skateboarding in the ‘community mobilisation’ category. During a round-table discussion where the nominees and award-winners shared details of their work and dreams, Asha revealed she was on her way to London for a month where her hosts had volunteered to teach her English. Asha is the first adivasi child from her village to travel abroad.

A month later, I was chatting with Asha about her adventures in England on Facebook Messenger, which she had installed on her smartphone, just like I have. Mannan ­preferred to speak on the phone from the ­village, whenever the signal was strong enough and he could be in one place for a while. The key words in our conversations were disruption, skateboarding, connectivity, learning and creativity.

“Perhaps it is a harder life than living in the city, but I feel in control now,” says Mannan. “I have something to hold on to. I feel my work makes a difference. Because Janwaar Castle is growing organically, it can be sustainable.” The introduction of a skatepark and skateboards has disrupted traditional caste, class, gender and age equations in the village. Slowly but surely, this community of Gond adivasis and Yadavs, which had otherwise fallen off modern India’s development grid, is witnessing radical, positive change. Not just has the attendance surged at the government school, the children have also been travelling across the country visiting other projects and attending art workshops. Janwaar has also become a hub for visiting artists, keen to contribute and learn from this community.

I live in the suburbs of New Delhi with my husband and three school-going children. Our day often starts with picking up the newspapers from our doorstep and then alternatively reading and rejecting to read the headlines across the pages. We browse through our smartphones and scroll down social media streams. I am diligent about deleting and blocking mindless forwarded memes and messages.

There is a sense of despair that pervades the socio-­political climate of our times. Like a permanent intravenous drip, news, fake news, maybe-news and opinion soak into our consciousness all day, depleting our energies whether we choose to react or struggle to ignore. In doctors’ waiting rooms, restaurants and showrooms, multiple television sets are always tuned in to news channels—as if the ruckus of televison debates, raging anchorpersons and looped videos of violence and lynching on the streets is meant to be idle entertainment. 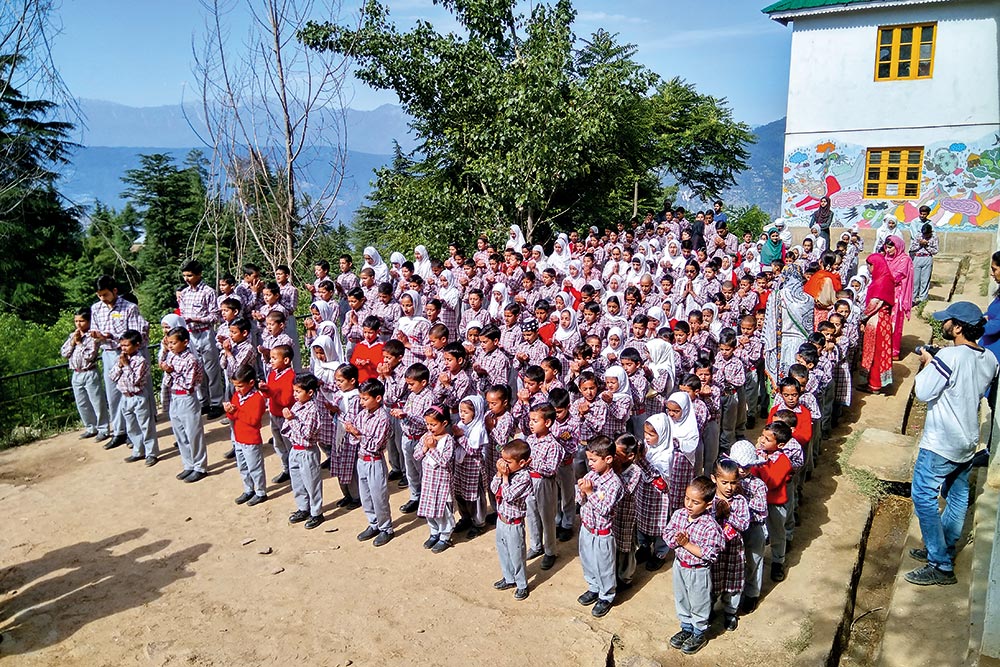 As a parent, one feels compelled to intervene in some way between what seems to be happening all over the world and what we want our children to believe about the world they are growing up in. I find myself answering a lot of questions from my children about everyday violence with the generic lines, “This isn’t supposed to happen, beta. This is not right. We are supposed to be safe. To be free. We can ask questions, we can disagree and express dissent. This is what it means to be a democracy.”

They nod quietly. I cannot tell to what extent they bel­ieve what I am saying. How powerful can the lone parent voice be, I wonder.

Last month, my children brought home a school magazine and showed it to me with a certain pride. Our eldest daughter has newly been included on the ­editorial board in her school. Amidst the admirable artwork and predictable adolescent poetry was an article on the dark side of Mahatma ­Gandhi. I wish I could say it was a well-­researched, evidence-based critique of the popular, revered persona of the man whose birthday is a national holiday across the country. Instead, it read like a bitter WhatsApp forw­ard manufactured by the burgeoning cottage industry for fake news in India. It was a poorly argued, repetitive mass of distortions. No one had written it; it was attributed to “Anonymous”. Another occasion for me to shake my head and mumble inarticulately, “This is not supposed to happen.” School is where your sense of ­enquiry is meant to be encouraged, where you acquire skills to discover answers. Not where you learn to ­copy-paste hate messages.

Breswana is a Himalayan village at 7,500 feet in Jammu’s Doda district. The nearest road is a three-hour trek away and the nearest city, Doda, is another hour’s drive by car. Almost a decade ago, when Sabbah Haji and her family had returned to their ancestral village and set up the Haji Public School in Breswana, they had 30 students in kindergarten from the village. Today they have 400 students, who come from 15 villages in the area.

Sabbah addressed the challenge of running a school in Breswana by putting out a call for volunteer teachers on social media. The students of Haji Public School receive ­exposure to the wider world and cultures bey­ond their village directly through a string of volunteer teachers who visit every academic session. They have appeared on national and internatio­nal television, in stories featuring the phenomenal growth of their school and community. An isolated community sought connections to sustain itself and, in turn, offers experience and inspiration to those who visit.

“We want to provide an environment in which our students can become good, intelligent or, at least, enabled human beings,” says Sabbah Haji. “I’m just ­doing what I think education should do, which is to give ­people the ability to think ­reasonably, with all the facts in hand.”

Imtiyaz Latief Dev and Amjad Latief Lohar are two of their senior students who have moved on to Kishtwar for higher studies. Amjad, who is the son of a blacksmith and a first generation learner, has got a scholarship to support his higher studies.

Ideals are what we make of them. They can remain restricted to protest banners and election slogans, or we can get inspired by each other’s work and attempt to live them.

One way to rise above despair and the onslaught of bad news is to assume agency over one’s own choices. To summon one’s own resources to create, rather than to just react. In June 2016, I found myself on the bank of the river Mandakini in Chitrakoot Dham, Karwi, amidst a group of women—all of them armed with smartphones and filming video clips. Earlier last year, I had conducted a workshop in mobile journalism with these women in the Delhi office of Khabar Lahariya, a women-only news organisation that reports from all over Uttar Pradesh in Bundeli, Awadhi and other dialects. Now I had arrived in Bundelkhand to provide technical training to a larger group of trainee journalists.

As we spent long summer days learning to frame shots, conduct interviews and film scenes, I listened to the life stories of Safina, Laali, Sunita, Sangeeta, Manisha, Babita, Saroj, Shyamkali, Sunita, Meera and Kavita. The common thread was poverty, caste oppression, domestic abuse and a struggle to get an education and financial independence. There was also grit, abundant humour and a determination to make the best of opportunities around them. A focus on telling stories of their own land and people in the way they understand them. 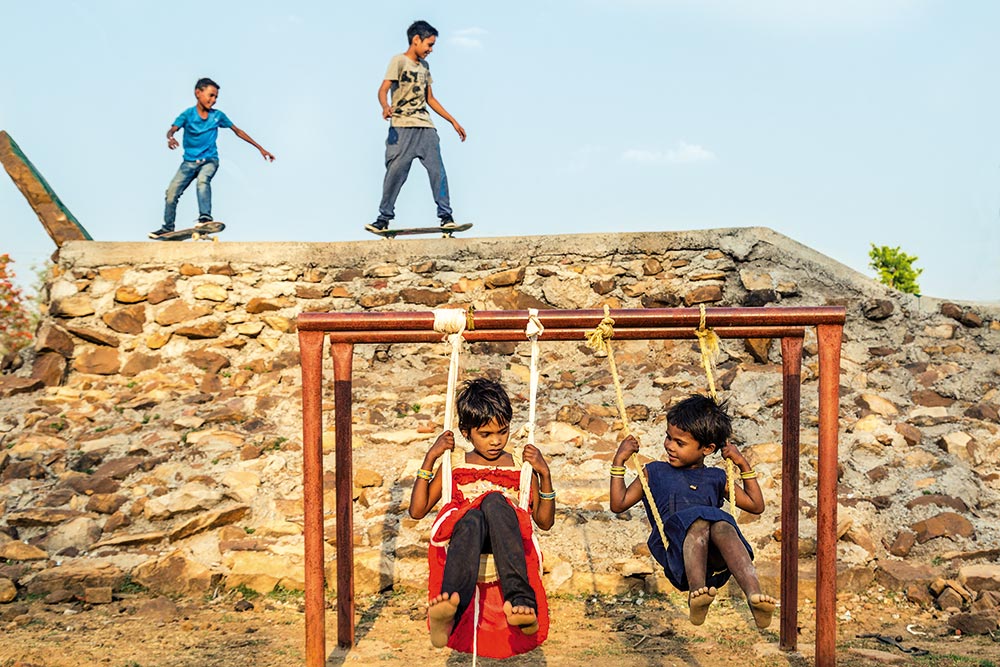 An evening at Janwaar Castle, where Gond and Yadav kids skate this way to a new tomorrow

Like the skateboards for adivasi chi­ldren in Janwaar, the smartphones in the hands of ­poorer-caste women journalists in Bundelkhand are equally disruptive of ­hierarchies and traditional social ­equations. Today, khabarlahariya.org hosts not only a rich archive of video news and features, they also create ‘The Kavita Show’, where Kavita editorialises on national news from a local perspective. Their focus has remained consistently on a local audience and perhaps this is why their appeal is far wider. The closer they report from the ground, the more authentic their content is for all audiences.

Hope is just a beginning, but hope is critical to guide act­ion. James Baldwin famously said, “Not everything that is faced can be changed, but nothing can be changed until it is faced.” The lone voice of the parent can break out of its isolation. It will find power and nurturance from other voices.

On the gentle slope of a hill in the Vindhyachal range in Sendhwa, Madhya Pradesh, is another school called the Adharshila Learning Centre. Started in 1998 by Amit and Jayashree, this residential school for Bhil and Bhilala children has become a case study for how local language, traditional knowledge and family history can be seamlessly incorporated in pedagogy to make education a holistic instead of alienating experience.

Beyond the world of privileged, elite schools in the metros, there are many other learning institutions in this country where reverence for knowledge and independent thinking is being nurtured. Beyond the shrill, motivated noise of mainstream journalism, there are other ways in which news is being reported. If there is an overwhelming feeling that the battle of individual freedoms and equality is being lost in India today, then we must also know there are ways in which this despair has its uses. Feeling the dissonance between what was meant to be and where we find ourselves instead is the first step towards change.

Is this the end of idealism? Ideals are what we make of them. They can remain restricted to protest banners and election slogans, or we can draw inspiration from each other’s work and attempt to live them. Pure cynicism is as impotent as pure idealism.

The alumni of Adharshila Learning Centre return to their school as PhD students and young professionals to both give and take from the source that had first been a fertile ground of learning for them.

From Janwaar, Mannan quotes Shivraj, a teenager who has been studying him with keen attention. “When you first came here, you looked like a typical city kid. But you have matured now. You have become like a big man,” Shivraj says, offering approval.

In every generation, there are those who smash the scaffolding of an out-of-date value system and rebuild again, starting from scratch. Their stories contain many permissions that ­nurture both the individual and ­community. Success stories have ­power and hope, they must travel as far as we can take them. 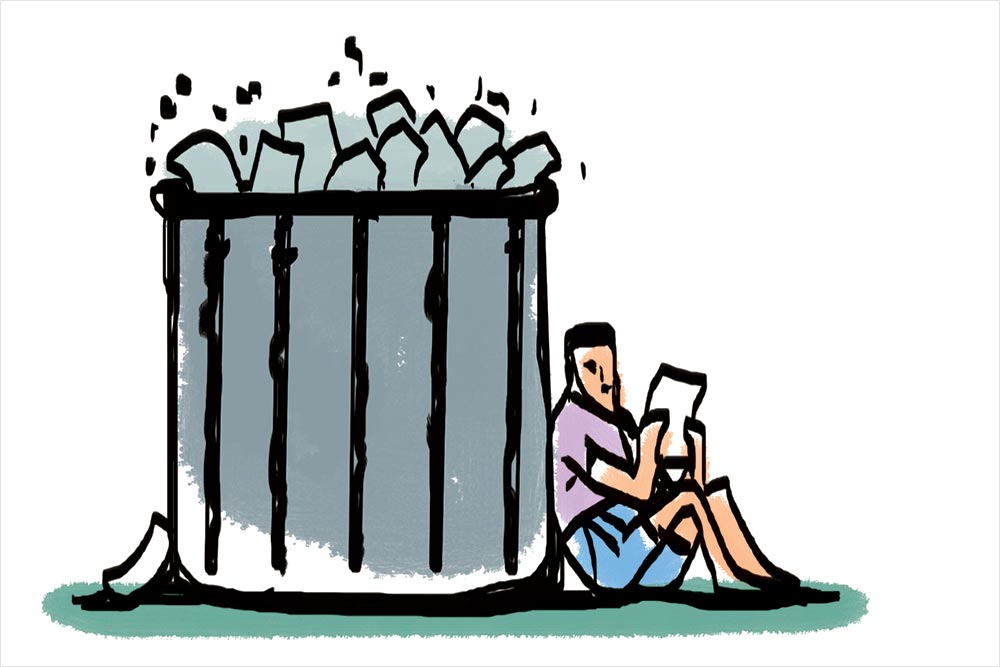 Natasha Badhwar is an independent film-maker, media trainer and author of the forthcoming My Daughters’ Mum

Desire And The Gospel Of Dream