Europe & Co talk weather, and mean business. Is it all for real? 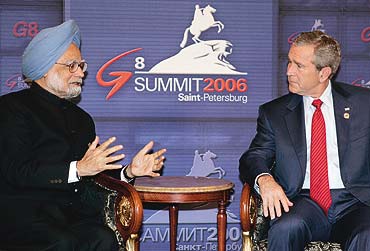 Prime Minister Manmohan Singh will soon join a gathering of eight powerful world leaders and another four thought to be getting there, with not much more than the weather to talk about—or its extension over time and space into climate. Because for everyone, India particularly, climate change is now an issue of survival.

Not because floods are about to drown one or a rash of hurricanes blow away another. The storm is over the money thought to be needed to contain climate change. Which makes all this such a matter of concern to the eight rich (the United States, Canada, Britain, France, Germany, Italy, Japan and Russia) and the five not-so-rich (India, China, South Africa, Brazil, Mexico) at the G-8 summit on June 6-8 at Heiligendamm, safer to say, in Germany.

They will be speaking a lot about a city in Japan with an easier name, Kyoto, where it was agreed 10 years ago that industrialised nations would cut emissions from factories, cars and what not. Do so because these emissions contain carbon dioxide that is warming the atmosphere, disrupting weather patterns, and so leading to climate change. Under the Kyoto Protocol therefore, the industrial countries that naturally emit most would cut emissions through the first implementation period starting next year through to 2012 by at least 5 per cent relative to 1990 levels. Those that signed up, that is; the biggest emitter of the lot, the US, did not.

But after 2012? That's when the danger awaits developing countries. Because the industrial few say India and China, in their furious quest for growth, are beginning to emit more and more, and while the Kyoto Protocol spared them as developing countries, they must be bound to limit emissions under a follow-up protocol. No, said India and China in unison this week at an Asia-Europe meeting in Germany. Coal- and oil-based industry feeds growth, and more cars and trucks on the road are both the expression and engine of growth. The rich grew rich this way; when others want to, everyone's talking climate change. 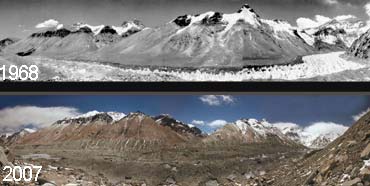 These pictures, taken four decades apart, map the retreat of the Rongbuk glacier on the Tibetan plateau, suggesting global warming.

More talk will come on the issue at the summit. "There are lots of proposals on the table," Louise Comeau from the Pembina Institute in Canada, who has been tracking the G-8 text that is still being negotiated, told Outlook. "There are moves that there should be differentiated targets and differentiated approaches for developed and developing countries, but how that gets finalised is not clear at the moment."

Everyone's looking out for disguises. Like German Chancellor Angela Merkel's suggestion for a 50 per cent emissions reduction by 2050 relative to 1990 levels, a 20 per cent cut in energy consumption by 2020, and to do what it takes to ensure temperatures don't rise more than two degrees this century. Worrying numbers for India. "India and China will oppose that because if we accept two degrees, then we will all agree that certain emissions reductions have to occur," says Comeau.

The G-8 summit is not a climate conference, but climate is hot on the agenda—it's the flavour of the season, as Africa was at the 2005 G-8 summit in Gleneagles, Scotland. As host, Germany has set the agenda, but others are inevitably pushing their own. Like one from the US for an Asia-Pacific partnership on climate change. This would seek to work outside of the United Nations, which has set up the Intergovernmental Panel on Climate Change (IPCC), headed by our own R.K. Pachauri. The US, and India and China, are alike in staying out of the Kyoto Protocol, though the exception for India and China is the principal reason the US gave for staying out of it. Not many expect a new club to emerge, but the negotiations are certain to be intense.

"The G-8 is not trying to establish new targets, these are communicators trying to get everyone to acknowledge certain facts," says Comeau. "What kind of targets are set is a completely different question." That G-8 should be talking climate at all is a measure of the powerful settling what matters, never mind institutional frameworks. Formal talks on a post-2012 agreement on climate change are due to begin in Bali in December, but there's far too much money involved in this climate business for the G-8 to disregard it.

Just how much climate is changing is contested far more widely than usually assumed. The assessments of the IPCC, out earlier this year, are usually accepted as scientific consensus on the subject. Usually but not universally.

The appropriately named US scientist Chris Landsea, who works at the National Oceanic and Atmospheric Administration's hurricane division at Miami, quit the IPCC this year because he found no evidence to back claims fellow scientists made regarding global warming setting off the hurricanes hitting the US. "It is beyond me why my colleagues would utilise the media to push an unsupported agenda that recent hurricane activity has been due to global warming," he said. "I personally cannot in good faith contribute to a process I view as both being motivated by pre-conceived agendas and being scientifically unsound."

The IPCC makes no climate prediction, it only sets out possible scenarios. By unspoken agreement, the media's picked only the worst-case scenarios. It's the oldest trap of the bad story being the good one, and the worst therefore the best. And everyone likes to accept the most dire of the lot, particularly when you look out of the window and see the weather's not what you'd expect it to be.

The last IPCC projection is itself not so dire—estimates of sea level rise have been falling, says Bjorn Lomborg, author of The Skeptical Environmentalist, the controversial book challenging what he calls 'The Litany' of doomsday projections. "In the 1980s, America's Environmental Protection Agency expected oceans to rise by several metres by 2100. By the 1990s, the IPCC was expecting a 67 cm rise. Six years ago, it anticipated ocean levels would be 48.5 cm higher than they are currently. In this year's report the rise (estimated for 2100) is 38.5 cm."

The reason for false scare scenarios, Lomborg says, is "greenhouse activism", much of it by journalists. "The problem with the recent press frenzy is that some seem to believe that no new report or development is enough if it doesn't reveal more serious consequences and more terrifying calamities than humanity has ever considered before." A 38.5 cm rise in ocean levels is a problem, he says, "but by no means will it bring down civilisation. Last century sea levels rose by half that amount without most of us even noticing."

Western scare-mongering on climate change is, he says in his book, a "stepping stone to political projects". John Samuel, international director, ActionAid, told Outlook the fundamental problem is a consumerist-driven political economy that "privileges the technological advantages of the North and uses climate change as a smokescreen to delegitimise the economic growth of emerging economies".

Profits have come into everything being done in the name of the climate. Under the Kyoto Protocol, an emissions trading scheme has been set up under which industries are given quotas to emit, with the right to buy additional quotas to pollute the atmosphere from another factory using less than its quota. And these rights are traded as shares, 80 per cent of them on the European market. A European firm can set up plant using 'clean' technology in India, and earn points—and through these, money—back home.

Western firms are waiting to offer sale of new technology that emits less. That's a straight sale, to be followed by continuing royalties through use of such technology, in a coal-fired power plant, for instance. And the resulting higher prices for energy and therefore products in India and China is now music to Europe and the US; who there wouldn't like to see that 'Made in China' label on more expensive and less competitive products. And Manmohan Singh cannot in a hurry take a decision for India either to limit growth, or to be forced to buy expensive new technology that makes Indian produce costly and hence less competitive.

Never forget that all the while the EU and the US are imposing tariffs and quotas in all sorts of ways if not always in name, subsidising domestic produce to make it artificially competitive. It's the progressive Western way—for its progress. For a change, it now comes through the climate as well.