The Pom-Pom Girls Save The World

Baulk at the bimbo? When it's Americana, India will learn, this too shall be. 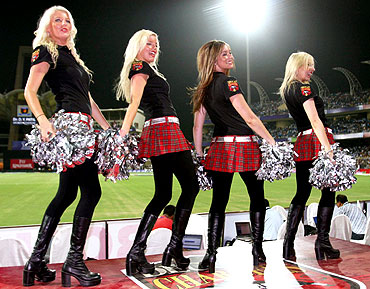 Not long ago, a columnist for the New York Times celebrated the arrival of the Washington Redskins cheerleaders in the Indian Premier League by remarking that this hallowed event must surely signal that India now more than ever looks to America, rather than Britain or Europe, as its model for cultural development. Apparently, while you are still playing cricket—a kind of baseball with a flat bat—you are now doing it in a satisfyingly snazzed-up American way.

As a red-blooded Yankee with a more than passing love for the steroid-pumped spectacle of the US National Football League (the one with armour and the funny-looking ball), as well as the more historic American standbys of Mom, baseball, hot dogs and apple pie, I felt my eyes well with sentimental tears. Not since the foul-mouthed hulks from Vince McMahon's World Wrestling Entertainment toured India has American culture had so representative an emissary as the humble and hardworking cheerleader.

Keep your Ramanujan and your 6,00,000 engineers a year. So you invented zero. Discovered it. Whatever. It's a number for losers anyway. For statistical and mathematical gimcrackery, we'll take our guys any day. Consider P.T. Barnum, the circus promoter who calculated, "There's a sucker born every minute." Or, of course, Earl Whipple, who invented the giant foam finger, aid to sports fans everywhere, that eloquently proclaims "We're Number One!" Anyway, what's math compared with Reality TV? Most of your software geeks are even now cracking open cans of Budweiser, and watching large-bosomed women wolf down plates of worms on Fear Factor. Yes, readers, I will say it. American culture has converted "pop" into a celebration of the dumb. Today's Elvis is Britney Spears. Genius!

Naturally, I was stunned to discover that not all Indians have...