Farce or tragedy? Raj is Thackeray Mark-II, down to the tacit Congress profiteering. 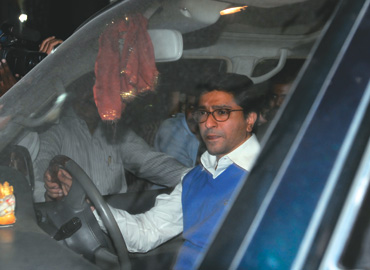 Here’s how the campaign against north Indians has impacted political parties in Maharashtra:

"I cannot be responsible for the acts committed by someone since I was not involved in the offence. If at all I give a speech and the person takes to the roads, there is no abetment on my part."
—Maharashtra Navnirman Sena leader Raj Thackeray


The tension was palpable as this statement was read out in defence of Raj in a Vikhroli court on February 13. Raj’s lawyer Ashok Mundargi knew he had to be at his best to get bail for his high-profile client who had been arrested earlier that evening under Section 153 of the IPC for inflammatory speeches and spreading hatred based on region and language. Raj walked out on bail with a surety of Rs 15,000 and a stern word from the magistrate, S.J. Sharma, to ensure that his party cadres didn’t disturb safety and tranquility. "You are an educated person Mr Thackeray, and I need not say anything more," he said.

The MNS leader’s statement in court is significant. It sought to dissociate his hate speeches from the vicious attacks mounted by his party activists across Maharashtra as two independent episodes—that was the only workable strategy to press for bail. If bail was denied, Raj would have been in judicial custody for days. In short, Raj effectively washed his hands of all the violence and bloodshed in his state over the last fortnight. This means his activists accused of murder and rioting can’t claim they were carrying out their party chief’s agenda. This had not yet sunk into his supporters as they cheered him as he left the court.

Even as the arrest drama played out, MNS activists let loose their anger across the state—52-year-old Ambadas Dharao, a Maharashtrian working with Hindustan Aeronautics Limited, was killed in Nashik when activists stoned a staff bus in which he was returning from work. The MNS’s student wing chief has been arrested and charged with the killing. At least 17 state transport vehicles were torched in Nashik, Pune and other centres, an autorickshaw was burnt in Mumbai. Though the police had effected 1,800 preventive arrests including those of MNS’s second-rung leaders before taking Raj into custody, activists kept the state on edge. More importantly, they succeeded in packing trains going to Uttar Pradesh and Bihar; railway estimates point to about 10,000 people having left for their home states since trouble began last fortnight from Nashik, Dhule, Manmad and Pune.

All considered, a disproportionate fallout to the controversy that started with Raj’s verbal salvo against cine icon Amitabh Bachchan for "favouring" Uttar Pradesh over Maharashtra. The delay on the part of the Congress-NCP government in moving decisively against Raj and the eventual arrest played out on 24x7 television also meant the marginal, wannabe politician and his fledgling party acquired a national political profile and won in pushing the Shiv Sena on the backfoot. Admits a Sena leader: "National leaders demanding his arrest and the issue being debated on TV has made him larger than life. It’s a clever political move."

On its part, Congress leaders asserted there was no gameplan, the delay could not be helped because central reinforcements had to be stationed before cracking down on Raj. Political alignments suggest something else. Raj’s MNS had entered into a post-poll arrangement with the Congress in six municipal corporations and councils across the state, helping it to come to power in each. Moreover, Raj’s campaign would divide the Maharashtrian voter base and hurt Shiv Sena’s poll prospects. The Congress could do with that, faced as it is with a high anti-incumbency sentiment. 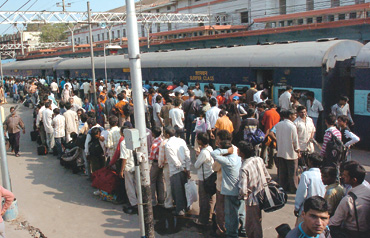 Also, north Indian leaders in the state Congress feel the fear psychosis created by Raj, and the state action against him, however delayed, will help rally this segment of the population around them. "Ultimately, north Indians have the numbers to influence the outcome in 40 of the 70 assembly seats in Mumbai-Thane region," points out Sanjay Nirupam, the ex-Sena man now with the Congress. Such a polarisation of the north Indian vote could also hurt the BJP.

Allegations of the state government dragging its feet and going soft on Raj are gaining ground. The FIR came about a week or ten days late. When it was eventually filed, it turned out to be rather mild. The state did not vehemently argue to link violence by MNS activists to Raj’s provocative statements. Says BJP national spokesperson Prakash Javadekar: "This is nothing but a drama scripted by the Congress and enacted willingly by Raj." State BJP president Nitin Gadkari echoes the sentiment: "This arrest is a political stunt...if the government meant business, they would have arrested him on the very first day. Violence could have been avoided."

The court proceedings were as much a drama as the simultaneous arrests of Raj and Samajwadi Party leader Abu Asim Azmi—also charged under Section 153 of the IPC—who too secured bail with a surety of Rs 10,000. Only days before he stood in the courtroom, Raj had said to a hand-picked media contingent: "What is this dadagiri of the Uttar Bharatiyas, this show of strength? The question is not of their migration but their motive. The message going out to them has been ‘come to Mumbai, you will be accommodated’ but I want this to stop." Then, writing in Maharashtra Times on February 9, Raj said: "Their (Bhaiyyas’) dadagiri has spread to everyday life.... We must stand up to them...we will break the dadagiri and goondagiri of those from UP and Bihar. We will win, because no law, no war, no man can stop ignited Maharashtrian minds." Before these were the highly provocative statements he had made at public meetings.

Though there was a plethora of inflammatory statements to pin him down, the police chose to mention only two of the most innocuous among them when the FIR was finally registered on February 11. These were: "Be it anybody of any religion, he has to follow the culture of Maharashtra" and "If they (SP) distribute sticks, we will distribute swords.... Amar Singh can’t enter without sanction from the Marathi manoos". Legal analysts confirm that Raj’s stronger statements being left out from the FIR has obviously weakened the case against him.

However, the party caught in the most piquant situation is the Shiv Sena. Initial confusion in the top echelons to counter Raj gave way to apprehension, and later to stark alarm, as the "turncoat of the family" seemed to walk away with the philosophy that defined the Sena since its inception in 1966. Sources disclosed that executive president Uddhav Thackeray—patriarch Bal Thackeray’s son and Raj’s cousin—was shaken enough to fear that he would lose ground to Raj on the original party plank. Maharashtrian voters and masses would be confused. If this was Uddhav’s apprehension, it was Raj’s objective. Eventually, Balasaheb condemned Raj by name but by then Raj had achieved some degree of success. The aggressive and unemployed Maharashtrian youth finds Raj’s brand of nativism attractive. "His is a desperate act," says Dr Aroon Tikekar, historian and ex-editor, "but he seems to have struck a chord among Maharashtrians who support him but not his methods."

Uddhav was forced to reiterate his party’s "Marathiness" and commitment to the maxim "Mumbai for Marathis" even as he attempted to woo the north Indian voter by being inclusive. "Maharashtrians know their grain from chaff, who’s real and who’s fake," said party MP and spokesperson Sanjay Raut. Still, leaders admit it’s a tough tightrope walk to be seen as champions of Marathi manoos and simultaneously be an inclusive and mature party. In effect, this has meant that Uddhav has pulled back from the relentless criticism he was piling on the state government on a slew of issues—from farmers’ suicides to scrapping the Urban Land Ceiling Act and severe power shortage.

This suits the Congress-led government well. In more ways than one, this recalls another Congress regime under Vasantrao Naik in the late ’60s and ’70s that looked the other way as a nascent Shiv Sena let loose its brand of identity politics and violence to break Left-led trade unions. Though estranged, Raj seems to have retraced his uncle’s path.