Modi jettisons one minister he lost faith in but how many more can he sacrifice? 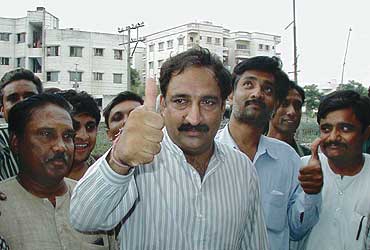 Narendra Modi may now wish that on the night of February 27 he had just watched television and gone to sleep. All along, he had thought that only one minister from his cabinet had told the Concerned Citizens Tribunal, headed by a former Supreme Court judge, Justice Krishna Iyer, about a meeting late that night. This was following an Outlook story on how a senior minister from Modi's own cabinet had revealed to the tribunal that on the very night of the Godhra tragedy, just hours before VHP-called bandh was to begin, the Gujarat chief minister had gathered his top men—including Ahmedabad's then police commissioner P.C. Pande and the state's dgp K. Chakravarthy—and instructed them not to interfere with the "spontaneous" Hindu reaction to Godhra that would soon unfold.

Modi's pet theory was that the man who went to the tribunal was his then revenue minister Haren Pandya. He even asked his intelligence officials to get proof to nail Pandya. But the intelligence wing, Outlook learns, gave no conclusive proof to Modi. Yet, he sent Pandya a show-cause notice through the state BJP president asking him to explain if and why and with whose permission he went to the tribunal. Pandya, in his sharp reply that unmistakably ridiculed Modi, denied he went to the tribunal. But, in what could be the first indicators of emerging political fault-lines in this disaster-prone state, Pandya surprised everyone by suddenly resigning from the cabinet.

Just when Modi was murmuring about how one man who tried to defy him had been suitably harassed, Outlook has information that not one but several key people from his government have told the tribunal about the late-night meeting. Another noted member of the tribunal, a former Supreme Court judge and former chairman of the Press Council of India, Justice P.B. Sawant, who heard a cross-section of people recount the causative factors of the riots, told Outlook: "Several politicians, police and administrative officials who currently hold high posts in the government told the tribunal about the late-night meeting on the 27th that Modi held. I would say we have good information from credible people that in that meeting Mr Modi asked his officials not to come in the way of what will occur in the next few days.

"In my opinion, there were two kinds of people who spoke to us—those who swam with the tide before and during the riots but felt repentant now, and those who supported the backlash but in hindsight felt the CM had gone too far. The implication of what he had said in the meeting is without any doubt a causative factor of what happened the next day. I do not want to be more specific about the kind of people who spoke to us because I can't risk even a small chance of letting their identities be known. But I can say that it was not just a single minister. There were other politicians, top police and administrative officials."

According to Justice Sawant, the tribunal has collected enough to prove that the police turned a blind eye to the pogrom."There is enough in what we have gathered to prove dereliction of duty on the part of those police and government officials who were present at the (February 27) meeting. But to prove the direct involvement of Narendra Modi, the officials who knew about the late-night meeting have to be cross-examined in court. That may be difficult for, while they chose to speak to the tribunal, they may not risk their careers by willing to be cross-examined in court. Also, to prove the contents of a meeting of this nature, it's important to get the statements of those who were physically present."

A former Bombay High Court judge, Justice Hosbet Suresh, who was also part of the tribunal, has also reconfirmed the meeting to Outlook. "Yes, a senior minister appeared before us for 35 to 40 minutes and talked to us about a few things that led to the Gujarat carnage.Among other things, the minister spoke about the meeting Modi called on the night of February 27." The minister spoke to the tribunal under the condition of anonymity, which was preserved in the Outlook story.

Father Cedric Prakash, who was among the people who organised the exhaustive people's tribunal, further confirms, "There was more than one senior BJP politician who spoke about the late-night meeting on February 27." Now, who will Modi suspect next? Valuable details of what transpired in this late-night meeting came from a top public servant who spoke to retired police officer K.S. Subramanian, one of the nine members in the tribunal that comprised retired judges and prominent citizens.

The public servant told Subramanian that around seven in the morning of February 28, the day when the VHP called its fateful bandh, the public servant called up dgp K. Chakravarthy. Recalled the public servant: "He (Chakravarthy) told me he had got home very late after the meeting with the chief minister. I told him, 'Looks like there will be trouble today.' I was not very surprised when he said, 'Yes there will be trouble.' He said the CM had given a lecture on Hindutva the previous night and how there will be a response as a reaction to Godhra. The police was clearly asked not to come in the way. Chakravarthy didn't feel good about it but I got the feeling he felt he had no choice but to comply."

By February 28, many government officials came to know of the meeting. There was a party hosted by a local newspaper late in the evening, on the 27th. Some of the top police and government officials were briefly present at this do but hurried away to be present at the CM's meeting. Modi doesn't deny that there was a meeting on the night of the 27th. What he denies is that any unholy instructions were given to the police and other important officials. This claim will be slammed time and again in the tribunal's report, which will be made public in a fortnight's time.

Father Prakash further says that there is a "good possibility" of seeking justice for the late-night meeting, in a court of law. According to him, if by some miracle there is evidence that points to Modi's involvement in the riots, he can be charged. But legal experts point out that for matters to reach that stage, much depends on whether any official who sat with Modi on that night will have the courage and conscience to come out in the open and make it clear once and for all what exactly transpired behind the closed doors. According to one of Modi's detractors, if in fact the late-night meeting was a routine one held by an honourable chief minister with his most important men, then it should go down in the history of such noble meetings as the least effective one, for everybody knows what happened in the days that followed.

Meanwhile, the BJP's state unit formally declared the Pandya chapter as closed on August 8. But the dissent brewing there could seriously impact the BJP's chances in the coming assembly elections. Talk within the BJP suggests that a below-the-surface confrontation between Modi and former CM Keshubhai Patel is already on. Pandya is said to be a Keshubhai man. When contacted, Pandya wouldn't comment either on his resignation or problems in the party.

Many human rights activists are eagerly awaiting the tribunal's report. But it is not in a tearing hurry to release it. According to a retired judge on the panel, every effort was being made to cross-check facts before releasing the report to ensure that it could stand up to any scrutiny. Says the judge: "We have cross-examined those who deposed before the tribunal in great detail. We have cross-checked what each one of them has deposed. We have taken great pains over it so that it becomes a valuable document that will be of use to those investigating the riots."

A confirmation of the February 27 meeting will up the clamour for Modi's head.