The Piper Of Banaras 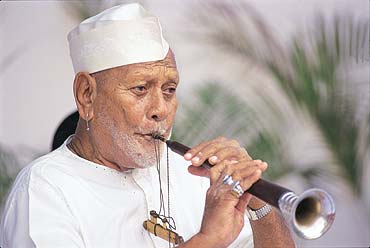 outlookindia.com
-0001-11-30T00:00:00+05:53
As India moves into her 60th year, the shashtiabdapoorti of her independence, the man who ushered in the new-born nation is no more. For it was Ustad Bismillah Khan Sahib, and the strains of his auspicious shehnai in the notes of Raga Kafi, that heralded that dawn of freedom. It was his shehnai that rang out, as the tricolour unfurled, that served as a purvarang to Jawaharlal Nehru's tryst with destiny speech.

How appropriate that it should have been this man. For in many ways he epitomised the India that we dreamt of then, and towards which we still aspire. Khan Sahib was truly a man of music, and truly an Indian. A devout Shia, he was an ardent devotee of Saraswati, and would recall with deep faith and emotion a vision he once had as a young boy, of Balaji. He spoke of swara as the unblemished mirror in which one saw one's self and the world. He knew no religion other than music's sweet swaras; they were his truest namaaz. And for him, the name of Allah was the sweeter if it was sung in the notes of an austere Bhairav.

He was born on March 21, 1916, in the princely state of Dumraon (now in Bihar), in a family of court musicians. But he followed his uncle and guru, Ali Bux 'Vilayatu', to Banaras, where he lived all his life. His life was bound up with the life of the city. He would walk through the streets with the Moharrum processions, playing sozkhwani—and the city would weep with his shehnai's lament. It was his shehnai that opened the doors of the famous Kashi Vishvanath Mandir every morning. And his music was delicately scented with the lilt and charm of Banaras' kajris, chaitis and dadras. He loved the city and, in turn, it loved him. Banaras—'bana ras' he would often pun—this city that is the essence of all beauty, all rasas, all life's experiences.

His was an old-world approach to music—exhorting us to truly listen rather than take the cerebral route to its appreciation. I recall a time when he was asked by a young listener at a Spicmacay concert, whether the raga he had played was Madhuvanti. The Ustad smiled and asked gently, "Is the soul of the raga to be found in its name? Listen to it, listen to its heart; that is more important."

Despite his many awards—Padma Shree, Padma Bhushan, Padma Vibhushan, and Bharat Ratna, the Sangeet Natak Akademi Award, the Tansen Puraskar, the honorary doctoral degrees—despite the fact that he had, single-handedly, made the shehnai a concert instrument, he remained at heart a simple man. A man who lived the life of the spirit, and was never seduced by the lures of large fees and concerts abroad. Till the end, he continued to live in his old, almost ramshackle, house in Sarai Harha in Banaras, supporting a large joint family, teaching his students, and smiling his charmingly mischievous smile.

I was fortunate to share a few moments with this great man and musician. It was in 1986, at the silver jubilee celebrations of Raag Rang, the music society set up by Naina Devi and several other artistes. Sitting in the green room with Nainaji and the maestro, watching them interact with so much warmth and goodwill, then later on stage, singing and playing together the lovely Banarsi thumri Aangan ma mat so sundarva, was a blessing in itself. I was fortunate to meet him again at his home, hear him regale a small and admiring audience with stories of old Banaras, of how during the Burhwa Mangal festival "the river became an endless stream of songs", of the tazias at Moharram, of his beloved Vishvanath Mandir, listen to him singing snatches of old bandishes, receive his blessings....

Ustad Bismillah Khan Sahib is no more. Yet, surely his spirit is still with us, his shehnai still echoes in the galis of Banaras. We will hear it when the mango trees blossom, when the rain pours down, when we mourn the martyrs of Karbala, when we celebrate our freedom, and the beautiful tapestry of our cultural heritage.


(The author is a thumri singer)

To enjoy and download the sounds of Bismillah Khan's shahnai, here are a couple of recommendations from outlookindia.com: Patrick Moutal's pages: Video Excerpts: Raga Bihag and Raga Multani and an MP3: Raga Bhairavi. Also, there is, of course, Vijaya Parrikar Library at SAWF