The Persistence Of The Brahmin 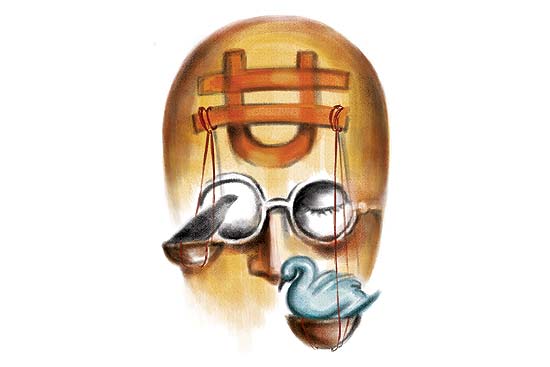 Illustration by Saahil
S. Anand December 01, 2014 00:00 IST The Persistence Of The Brahmin

Why have the Brahmins not produced a Voltaire?.... A Voltaire among the Brahmins would be a positive danger to the maintenance of a civilisation which is contrived to maintain Brahminic supremacy.

When taken on for ‘casteism’, his defence was:

For the uninitiated, GSB stands for Gaud Saraswat Brahmin: a breed that believes its ‘history’ began with reciting the Rig Veda along the lost river, Saraswati; they believe that Parashu­rama, the sixth incarnation of Vishnu, having annihilated the Kshatriya race 21 times, oversaw the migration of the Saraswat Brahmins and got them settled in the ‘Pure Land’ along the Sahayadri mountains. As a GSB, Sardesai could not conceal his glee when Suresh Prabhu and Manohar Parrikar made it to Modi’s expanded cabinet. Would he, likewise, feel more pride when he sees a GSB like Deepika Padukone rat­her than watching Katrina Kaif? Would he feel more sad when a non-GSB breaks one of Sachin Tendulkar’s records? Would Sardesai’s judgement of Vijay Mallya be clouded by caste solidarity? Would a 2006 survey which pointed out that 49 per cent of decision-makers in the media are Brahmins, and that Dalits and Adivasis are almost absent, have ever worried Sardesai?

Being a proud Goan or Indian is not the same as being a proud GSB. Admission to categories like Goan or Indian is open to all. However, admission to the category Brahmin, that too of a specific jati such as GSB, is foreclosed. Brahmin, more than other jati identities, works on the principle of exclusion. Taking pride in one’s Brahmin jati is the same as believing in the ascending scale of reverence and descending scale of contempt that the caste system espouses. However, let it be said that a Dalit proud of Mayawati or of the achievements of Bezwada Wilson of Safai Karmachari Andolan is not the same as god-stingingly privileged Sardesai crowing about Parrikar and Prabhu.

Sardesai likely lost his job at CNN-IBN owing to his views critical of Modi’s role in the Gujarat 2002 carnage. Why, he even lost his cool when he got heckled by a section of the ‘Har Har Modi’ crowd at Madison Square Garden in NYC on September 28, 2014. Surely, Sardesai should count as a keen, principled anti-Hindutva voice. And he, like most lib-sec-dem Indians, sees no contradiction in opposing Bad Hin­dutva but taking pride in what is reckoned as Good Hinduism. In this popular and convenient narrative, all the ills of caste are said to owe to one thing—the antidote that Ambedkar introduced against the venom of caste, reservation.

Imagine a leading television journalist in the US priding over a couple of New England WASPs in the Obama administration, or, more realistically, expressing concern over the lack of them. While Ashis Nandy’s casual expression of prejudice at the Jaipur Literature Festival in 2013—“It is a fact that most of the corrupt come from the OBCs, and the Scheduled Castes and now increasingly Scheduled Tribes”—can be easily deplored (and yet had ardent defenders), Sardesai’s insouciant amour-propre does not upset the common sense and lazy consensus around caste. We are as inured to such impromptu averments of jati pride as we are to the sight of sewer workers who enter drains, and many times die. There’s no shame here.

Let us turn to GSB Exhibit Two, Jnanpith awardee Girish Karnad. In an exhaustive interview with the Indian Express in September 2013, the litterateur was speaking on the controversial ban on the 1970 film, Samskara, based on fellow-Brahmin U.R. Ananthamurthy’s novel of the same name, translated lovingly into English by another Brahmin, A.K. Ramanujan, also a revered icon of the liberal-secular pantheon. On the “allegation” that such a collective effort could lead to an “anti-Brahmin” film, Karnad, who essayed the protagonist’s role in the film, says, with touching incredulousness: “The writer of the story was a Brahmin, the producer was a Brahmin, as were most people associated with the film. Then why would we put forth anti-Brahmin views?” In an unexceptional fashion, Karnad essentialises himself and an entire generation of Nehruvian secular Brahmins. That Brahmins, in general, are believed to be congenitally incapable of anti-Brahmin views is the reason why caste has been so resilient. This is the reason why the self-anointed Secular Brahmins of the Republic more easily gravitated towards Nehru (a Kashmiri Saraswat), with whom they shared their loathing for reservation, than towards a figure like Ambedkar who demanded that caste be annihilated, who found the Purusha Sukta hymn in the Rig Veda immo­ral, criminal in intent, and anti-social. At the core, the prototype Karnad or Sardesai represents has believed and continues to believe in the innate distinctness and superiority of Brahmins. They refuse to see that their pride is wrapped in the patina of prejudice.

Exhibit Three is a Tamil Brahmin, Ramachandra Guha. This writer of nationalist histories is as much an apologist for his own jati as Sardesai, who calls Guha “the closest I have had as a mentor”. In a 2004 essay on C. Rajagopala­chari, that was reissued recently on the centre-right webzine Swarajya, Guha parades his Brahmin pride. He begins: “The first and, as it happens, the last time I wept at the death of a political leader was on the 26th of December, 1972. Rajagopalachari died.” And, “the tears flowed more freely because the leader who had just died came from my own community of Tamil Brahmins.” Caste feeling and pride are once again naturalised and presented as normative. A year later when Periyar E.V. Ramasamy, a Naicker opponent of Brahminism, died, Guha likely was unmoved. Concomitan­tly, should we assume Guha’s heart would beat more for the travails of J. Jayalalitha than those of Mayawati?

It is in the same spirit that Exhibit Four, Indra Krishnamurthy Nooyi, flaunts her Brahmin pride during a formal conversation with fellow-Brahmin Nandan Nilekani (a GSB too, and good friend of Guha’s) in 2007. One anecdote from Nooyi’s past has been much analysed and discussed: of how on the day she returned home as PepsiCo CEO all her mother told Nooyi was to go buy milk. But what never came under scrutiny was the way Nooyi associated her ‘braininess’ with being Brahmin:

Nilekani: Your mother seems to be have been a huge influence on you, right from the days she prompted you to get 100% marks in Maths and all that...

Nooyi: That is typical southern Brahmin stuff. So there is nothing unique about that. I think that she was genetically programmed for that. The entire family focused on grades. When parents got together, they only compared the report cards of their kids.

South Indian Brahmins are genetically programmed to be good at math and be focused on grades. And we should be grateful the enlightened Nooyi family perhaps did not employ a domestic slave to go buy milk late in the evening.

The statements of Sardesai, Guha, Karnad and Nooyi are as despicable as that of any leader of a khap panchayat issuing dire diktats; they are as uncouth as the views of the Puri Shankaracharya, Nischalananda Saraswati, who last month justified the prevention of entry for Dalits into temples, saying this accorded with Hindu scriptures. In fact, these liberals being so comfortable in their caste skin ought to shock us more than those who strut their right-wing and Sanatanist proclivities. Sardesai’s comfort with the surface suaveness of Prabhu and Parrikar is more worrying than his discomfort with Modi being reassuring. After all, Hindutva, at least on paper, is a more inclusive and encompassing category than the exclusive GSB denomination.

We are still left with Ambedkar’s question: Why have the Brahmins not produced a Voltaire?

(S. Anand is the publisher of Navayana.)