The People Of The Fallout

In Khetolai, the village closest to the Pokhran nuclear test site, cancer is felling people and cattle. No one cares. 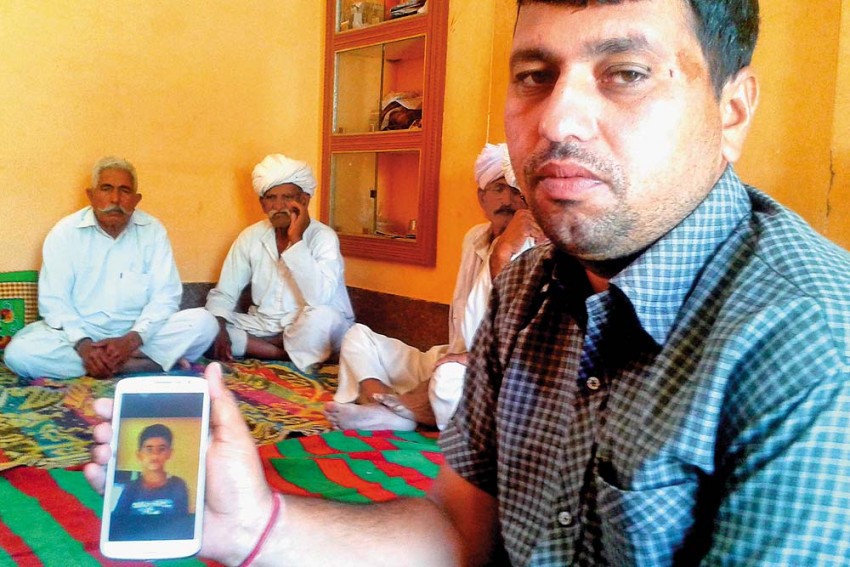 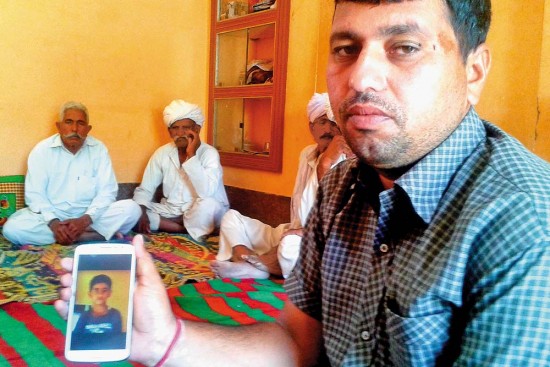 “The army jeeps, the fatigues, the big trucks—these things always fascinated Neeraj,” says Ashok Bishnoi, a school teacher, in Khetolai, the village nearest to Pokhran, Rajasthan, where India has conducted nuclear test explosions. He is speaking of an 11-year-old boy who succumbed to cancer on February 15. “He wanted to become a soldier,” says Neeraj’s father Ram Ratan. “He passed away within weeks of a brain tumour being detected at an Ahmedabad hospital. The closest hospital in Pokhran does not have lab facilities to detect that.” This is the third cancer death in the family: Ram Ratan lost his father to blood cancer in 2002 and his grandmother in 2006.

In Khetolai, death from cancer has become a common occurrence; the connection to the nuclear tests is hard to miss. Neeraj is the fourth to have died in eight months. Nathuram, the village pradhan, says that, since the 1998 nuclear test, five-six villagers have died every year—all taken by cancer. It’s just 5 km from the Khetolai military range in Pokhran city. Located 80 km from the Jaisalmer district headquarters, in the forbidding Thar desert, the site was first used for Operation Smiling Buddha in 1974 and Operation Shakti in 1998 to test a series of nuclear weapons. Since then, it is used as an active military exercise and testing range. 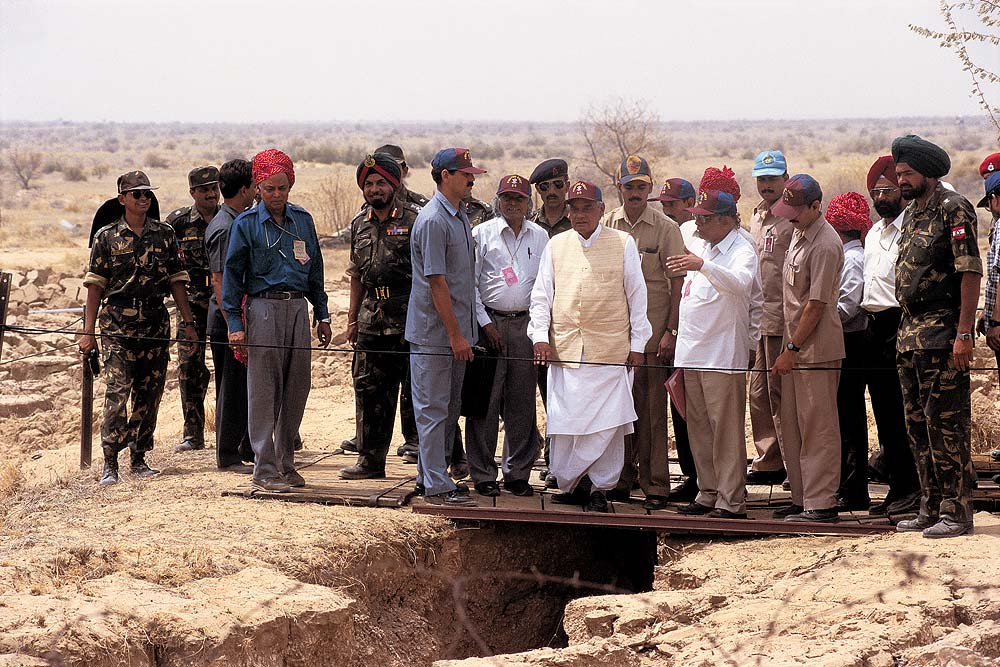 Vajpayee at the blast site

“After the explosions in 1974, we had big craters everywhere,” says Padam Jaani, a retired postmaster. “The craters are gone, but the cracks are still frequent.” Every house bears cracks, some spreading like spider webs. The army continues to mark its presence with exercises on the range. Every few hours, explosions are heard. “The sound does not even register in our minds any more,” says Vinod Bishnoi, a gram sahayak.

The village has a voting population of 2,100, a total population of close to 3,000 and is dominated by the Bishnoi community, Hindu agriculturists who follow the teachings of Guru Jambeshwar, who prophesied that causing harm to the environment, to any living thing, is causing harm to oneself. For centuries, the Bishnois have protected trees and animals and practised vegetarianism. The community is classified under Other Backward Classes (OBCs) in Rajasthan, and most families in Khetolai have at least one member in a government job—teaching, in the police or the armed forces, or other jobs. Most Bishnoi households also keep cattle, with women being in charge of them. “On average, each family owns 10-15 cows,” says Manne Lal, another gram sahayak.

Inside the house, Neeraj’s mother Nirma Devi sits in the dark mourning with a group of women, wiping her tears with her chunni. “It’s all because of the nuclear tests,” she wails. “Sometimes it’s cancer, sometimes allergy.” The women sitting with her join in. Says Girija Devi, Neeraj’s grand-aunt, wailing, “This is not the first time this has happened. It has been on since the very first big dhamaaka. No one does anything for us.” In 2002, Girija Devi had lost her daughter, aged 22 years, to cancer.

Says Pramila, another aunt of Neeraj, “In the last few years, lots of women have died of breast cancer. They are shy to speak of the early symptoms, so it goes unaddressed. By the time it is detected, the cancer is in its last stages. Even the families don’t want to talk about it.”

Nirma has two more sons, aged 12 and six years. She’d had a stillborn two years back: the foetus died in the womb at 20 weeks. Says Pramila, “Not just Nirma, there are so many still births and frequent cases of abortion in the village. My cousin also went through one recently.”

There are other signs of the troubles brought upon this village by the two big nuclear explosions that happened nearby. Pramila’s three-year-old daughter, resting in her lap, hasn’t begun to speak yet. “There are at least 10-15 children in the village who are mute. How is all this happening?” she asks. Nirma’s neighbour Sita Devi starts counting names on her finger, “Sai Ram, Raju Ram, Mangi Lal, Ram Lal and who is that...yes, Bangri Ram, Nimba Ram. Meet any of them. All their children are under five and all of them are mute. Some are mentally retarded. We did not have even one such case two decades back.” 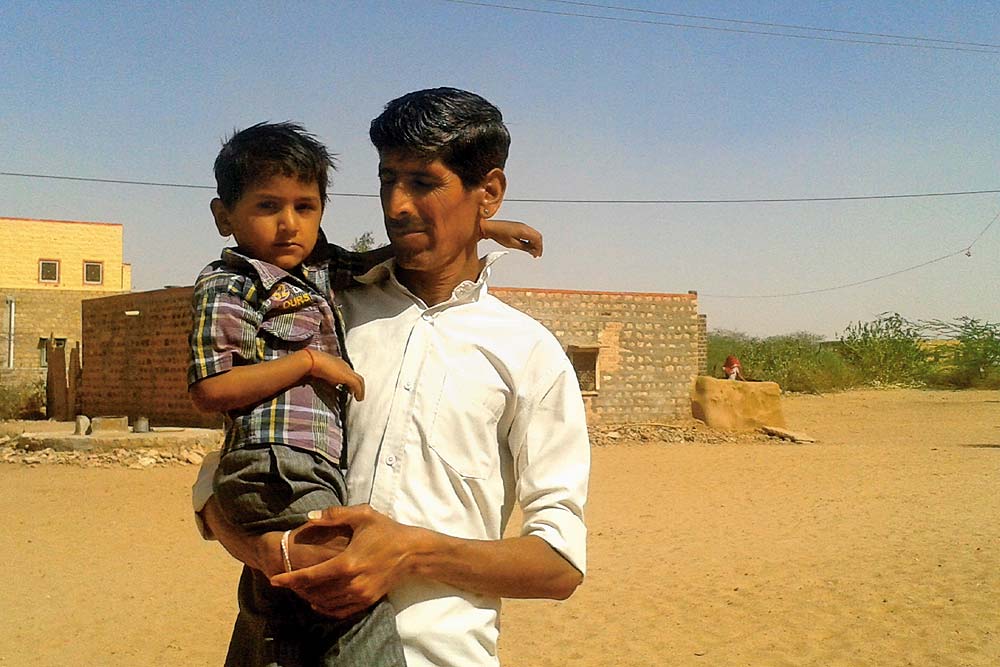 After-effects? Mangi Ram with his son, who cannot speak

Even the cattle are affected. The women, who usually take them out for grazing, say there’s no pasture land left. “In the 1960s, the biggest stretch of pasture land we had was taken over by the army for a testing zone,” says Asha Devi, who is in her seventies. “They have expanded bit by bit since then. There’s not enough to eat for the cattle and this has affected milk production. And unusual cancers are now a common affliction even for the animals. Cows don’t produce milk from all the glands anymore.” Many cows have gone blind, they even deliver calves that are blind, and some develop rashes that keep worsening.

“How can villagers know that the cancer is because of the radiation?” asks Dr N.R. Nayak, the chief medical officer.

Dr R.G. Sharma, then with the Dr S.N. Medical College, Jodhpur, led a study of the region from 1984-88, the findings of which were published in the Indian Journal of Cancer in September 1992. Sharma and his associates found 2,662 new cancer cases; this was 10 years after the first nuclear tests in 1974. The report suggested that “a major cause of bone malignancy is ionising radiation”, but the doctors cautioned that “no correlation should be made with the Pokhran explosion unless further studies are done”. The incidence of leukaemia was “5.2 per cent for men and 4.7 per cent women, compared to the world figures of 3.3 per cent and 2.6 per cent, respectively”. The team then advocated that a detailed study must be taken up to determine the role of the 1974 Pokhran nuclear test in this high incidence of bone cancer and leukaemia in western Rajasthan.

A report published by the World Health Organisation, GLOBOCAN, in 2012, concluded that there are five lakh deaths due to cancer in India. A rough calculation suggests that one in 2,500 people in India dies because of cancer. In Khetolai, the same calculation suggests that one in 500 people succumbs to cancer, four times the national average. While experts suggests that cancer could have more than one reason—not just high radiation levels because of nuclear tests—the connection between exposure to radiation and cancer is too well-established to be ruled out.

A response to an RTI filed last year by Chetan Kothari to the Bhabha Atomic Research Centre (BARC) under the Department of Atomic Energy revealed in September last year that 70 per cent of the health- related deaths in the atomic energy hubs across the country in the last 20 years were because of cancer. But despite this alarming finding, no further studies were conducted.

Dr Satyajit Rath of the National Institute of Immunology in Delhi says, “In principle, it is possible that the proximity of the village to the nuclear testing site may be a cause of these adverse medical events but anecdotal reliability is not enough to establish that these nuclear radiations are the reason for this. These incidents should have been a starting point to generate reliable data to study the extent of impact on health and surroundings in the village.” But in the last 31 years—since the first tests in 1974—the government has not cared to commission a study to find out.

Kavita Srivastava, an activist with the People’s Union of Civil Liberties (PUCL) who has worked in Rajasthan for over three decades, says, “The problem is that all governments have constantly undermined people’s health and shown lack of concern for their economy near the Pokhran region. It is proven by the fact no government has conducted in-depth research to study the impact of radiation on people’s health and on the cattle in so many years.” It is this lack of political will to investigate that many activists like Srivastava find troublesome. Dr N.R. Nayak, the chief medical officer of the district, denies any knowledge of the rise in cancer cases in Pokhran. He says, “We have no such information about the rise of cancer deaths in the area. It is not true. How can villagers know that the cancer is because of radiation? It is political motivation that makes them say that.”

Villagers are also scared for their farm land. “In 1974, they gave us Rs 3-4 per bigha. Those who had to give away 500 bighas were given Rs 2,000, which got over in 2-3 years. They assured us that they will give us better land near the canal. Nothing happened. So we are almost landless now,” says a villager. New unconfirmed incidents of land acquisition by the army are being reported again. “Recently, the army has put their signs on four-five agricultural fields, 3-4 bighas each, in Chacha village, in the vicinity of the testing range. The farmers have obtained a stay order from the court and the revenue department is set to measure it again. First, they took away the grazing grounds and now they want the agricultural land. No one answers, no one info­rms,” he says. Prahlad Ram, 70, who retired from the army, complains that leave alone providing proper compensation for the land taken away—or the diseases locals are having to endure—the government hasn’t even opened a decent hospital here. Neeraj had to be taken to Ahme­dabad for diagnosis and treatment.

India is a nuclear power but the people at whose cost it has been possible are not amused. Says Prahlad Ram, who as a former armyman knows the ‘might’ that nuclear weapons bring a nation, says, “The nuclear weapons have projected the country as a powerful nation globally. Very good. But what we want to know is why are they choosing our villages again and again for the nation’s development. At the cost of our health, lives and livelihood! Why can’t they leave us alone? Is there no other land left in the country for development?”

By Neha Dixit in Pokhran

The Wind Hums A Tamil Air