The Pen Points To Us

Journalists who live in glass houses must throw stones at others 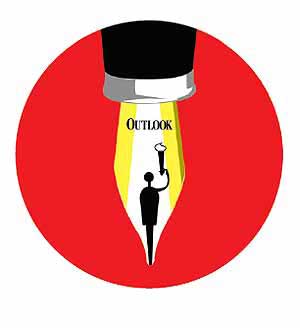 Proverbs become cliches because they are cited repeatedly for their profound, incontrovertible observations on life. Turn these cliches on their head and you may discover sublime meanings. For Outlook’s 15th birthday, instead of cutting cakes, blowing out candles and printing inane power lists, we decided to tweak a popular cliche and say that journalists who live in glass houses must throw stones at others. Heck, we are journalists, taught to blow against the wind, even live dangerously.

The 15th anniversary issue you hold in your hands does precisely that: it throws stones at the giant media houses, their ambitious owners, their flamboyant editors and wily marketing honchos. We have chosen to defy the norm that dog won’t eat dog because the media is palapably in crisis. What’s worse, the deep gashes are all self-inflicted, by those like us in the media itself.

Of late, you must have heard of our transgressions—media houses taking money to plug for politicians, demanding equity from companies in return for positive coverage, allowing marketing honchos to decide what is news, pushing editors to the margins and reducing journalists to handymen. Haven’t you been astounded at what passes for breaking news? In the quest to win circulation and TRP wars, universally accepted journalistic standards have been compromised. These mortal wounds scream out the name of our affliction—an insatiable appetite for profit. These worrying aspects are examined threadbare in this issue.

There’s another form of corruption, one that does not entail exchange of money: it is, rather, a flaw that has manifested itself as the media has evolved over the years. Considering that almost all media houses depend on advertisers for survival, is it inevitable that they espouse the worldview of the rich? What about the downtrodden, whose cause the media was traditionally enjoined upon to fight? Are newspapers headed for the graveyard under the onslaught of the internet? These questions pertain not only to India, but to other countries as well. Delving into these issue are Noam Chomsky, Harold Evans, Tim Sebastian, Pankaj Mishra and others.

We aren’t among those who always see darkness in light, mope in times of celebration, indulge in self-flagellation at an hour appropriate for thumping chests. The number 15 has about it an inexplicable ring of laughter and the pop of the champagne bottle. True to the spirit of our age, we rewind the spool of memory to bring to you the spiteful as well as laudatory letters we received, the photos worth a billion words, the cartoons that tickled and made you think, the stories we broke to grab headlines, the covers that bombed, samples of the delectable diary page (which many of you always read first) and the book reviews scathing of those who had the temerity to write tomes.

You are likely to wonder why we wish to flaunt our woes and wounds before you. Remember, the media is the watchdog of democracy. From that, it follows that a vibrant media is a sine qua non for a vibrant democracy, a point many writers harp upon in this issue. And we wish to tell those in the fraternity hurt by our stone-pelting that, living in glass houses, as we at Outlook do too, the flying shards are likely to rain upon us as well. Please bear your pain with a grin, because the truth—as one Indian newspaper in its more pugnacious days never tired of preaching—involves us all.

Such A Short But Sweet Journey