The Pay Is Gross

Two myths about dream salaries. One, the take-home is usually more down to earth. Two, SC/ST students still get a raw deal. 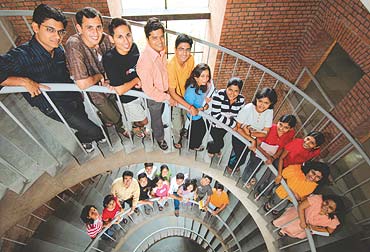 outlookindia.com
-0001-11-30T00:00:00+0553
When assorted surveys come out chronicling the sky-high salaries that companies offer freshly-minted graduates, it’s easy to imagine a collective sigh of despair and a deep sense of envy amongst the country’s middle class. Most of us wonder why we didn’t attend such a course. Although this piece is not guaranteed to have a placebo effect on you, it may help ease some of the heartburn.

Consider this: the fancy salary you hear or read about, in most cases, includes intangibles like cost of training, variable pay and relocation expenses. Many of them are just one-time payments. So, a Rs 10 lakh per annum salary actually translates into Rs 6-7 lakh, which makes the take-home gap between you and the new marketing whizkid on the block perhaps not that huge. Take, for instance, a leading airline company. It pays MBA graduates an annual salary of Rs 13 lakh. But that includes several notional benefits such as free airline travel and health insurance premium (Rs 2 lakh). Benefits from potential foreign postings and variable pay accounts for a further Rs 5 lakh.

Or take another case of a mid-level IT firm, which recruited an ICFAI graduate for an overseas posting at an annual salary of Rs 5 lakh (to be paid in US dollars). The annual pay included Rs 58,000 towards training costs. And in real terms, after adjustments for purchase power parity and high cost of living in the US, this salary would be somewhere closer to Rs 2.5 to 3 lakh per annum in the Indian context.

The most glaring way to make salaries look attractive is the inclusion of a performance-based pay or variable pay in the overall salary. For, this component is never guaranteed at all times. For example, a Rs 1 lakh a year variable pay implies that the employee only gets it provided both the individual and the company achieve their respective annual objectives. In most cases, even the above-average performers manage 50-60 per cent of the stated amount. 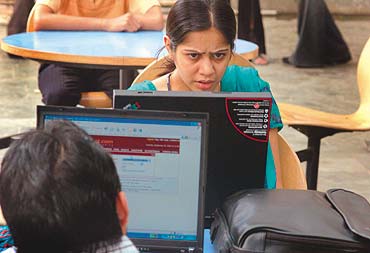 A scene from Narsee Monji college in Mumbai

A management executive who joined a well-known Mumbai-based FMCG firm a year ago says that despite being classified as an ‘exceptional performer’, he received only 70 per cent of his variable component of Rs 2 lakh. The reason: the brand did not meet the "expected" targets. City relocation charges significantly inflate the final salary figures as such payments can be as high as Rs 1 lakh. But it is a one-time payment that disappears from the payslip after the first year. "At campus placements in well-known B-Schools, it is assumed by the students that the actual salary would be only 80 per cent of the quoted package. But in smaller B-schools, companies can get away with jacking up the notional components because they know the students wouldn’t have too many offers to choose from," explains Gurdeep Hora, MD, Synergy Consultants, a Delhi-based HR outfit.

Another interesting point regarding B-school salaries, thrown up by this year’s Outlook-Cfore survey, is that students belonging to the SC/STs, who pass out of premier institutes like the IIMs, are still at the bottom of the heap when it comes to remunerations. (As per law, the quota for SC/STs in IIMs is 22.5 per cent, but only between 9 and 16 per cent apply for placements due to various reasons. However, all SC/ST students who apply for placements do get jobs.)

The average salary for Dalits is at least Rs 2 lakh per annum less than the institute’s average and normally a Dalit is the recipient of the lowest salary offered at the IIMs. For instance, while the average salary for all students at IIM-A was Rs 9.7 lakh, the figure for the reserved category students was Rs 7.8 lakh. The contrast is higher when one compares the differences in maximum salaries for domestic jobs. In the case of IIM-A this year, the respective figures were Rs 34.20 lakh per annum (non-quota), and Rs 11 lakh. IIM-B was one of the rare IIMs where a Dalit bagged a foreign job ($58,000 per annum). 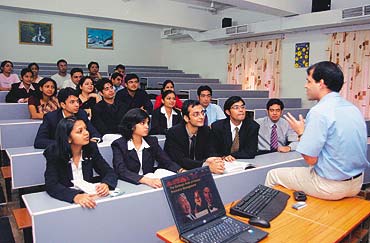 A class in session at Xavier Institute, Bhubaneshwar

Most IIMs whom Outlook contacted did not wish to comment on the numbers saying it was a "politically incorrect" subject to talk about, but added that there were no specific reasons to explain the lower salaries paid to SC/STs by India Inc. However, the IIMs were forced to disclose the salary differentials under the RTI Act. Usually candidates with work experience get better packages, and perhaps most candidates from the reserved category don’t have it. Hence, the latter’s average salary is lower," explains Kulbhushan Balooni, a member of the placement cell at IIM-K. He asserts that there can be no discrimination against quota candidates during placement interviews. "There’s no way a recruiter can find out a candidate’s caste. The information is kept confidential," he adds. G.K. Nagaraj, the placement coordinator at IIM-B, also rules out discrimination and says he has seen Dalits being placed in global firms like McKinsey and Goldman Sachs. "The reality can be different from the candidates’ aspirations. Being first-generation beneficiaries, the Dalits may not have the soft-skills that private firms seek. From my 25-year experience, I can say that Dalits are getting better offers with each passing year," he says.

But Dalit activist and writer Chandrabhan Prasad counters that private companies can easily make out a Dalit candidate from the rest with their physical appearance and a not-so-smooth English accent. He cites an example of an MBA graduate who hailed from Azamgarh, UP, and failed the interview with a private firm because of his rural accent. He points out that many IIM Dalit candidates may end up with a job with PSUs, who have to fulfil quotas under reserved categories.

Rajeev Doss, a Dalit who graduated from IIM-L a couple of years ago and is now working with an oil psu, agrees that lack of soft skills like communication can be an impediment for SC/ST graduates to get into MNCs, and they may end up working with PSUs, whose packages are significantly lower. Although IIMs offer special sessions for Dalits to tide over these problems, Doss admits that in an extremely competitive environment, there is a stigma attached to attending such remedial sessions, and most Dalits choose to give it a miss.

Perhaps, the unleashing of market forces in terms of giving more freedom to private B-Schools, while continuing with reservations, will change this scenario in the near future.