The Path Of The Rikishi

She’s an oddity. Her craft, a mystery. What is it about her that feels ‘real’ somehow? 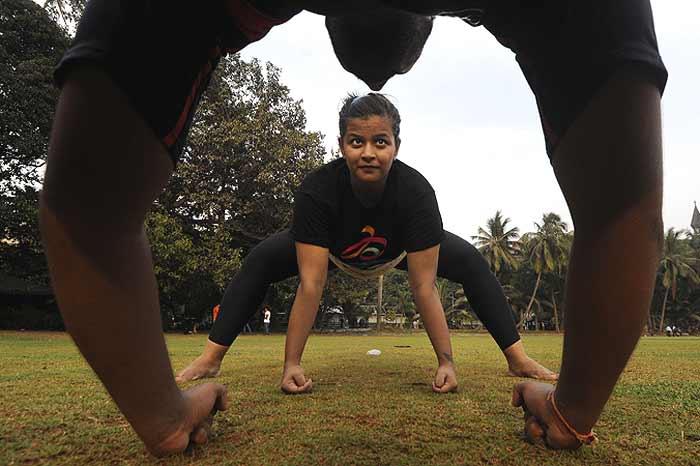 It’s a breezy April evening at the Oval Maidan. This whole participatory journalism thing’s starting to sink in as I stand across from a determined-looking Hetal Dave, crouched in mid-sumo squat, waiting to attack. Who? Me! I’ll try anything once, be it wrestling a sumo wrestler or marriage. The fact that the first is happening prior to the latter is indicative of how unpredictable my life choices have been. But I’m cautious. She weighs seventy kilos, I weigh more and am taller, the odds seemed stacked in my favour. I like to think I pick my battles well. Besides, this experience is going to rank right up there with babysitting a python and that one time with... never mind. Before the credits finishing rolling in my head, she’s off, heading right for me. Me with my Mary Janes sliding easily along the once firm, now damp muddy patch I stood on, the sprinkler system having plied the ground into a mushy consistency. And all I can think of are my shoes. Sudhir Dave, Hetal’s dad, isn’t impressed. It’s in the mind, he tells me, it’s all in the mind, size doesn’t matter. And we are ready for the next bout.

This time she grips me, holding me in place. There is no sliding now. I’m rooted to the ground, unable to move, but at least my shoes are alright. It makes perfect sense that a sumo bout doesn’t last longer than three minutes. That’d be far too long, this is a mindgame first and then one of strength. It’s very zen and meditative—a sport marked by the languid, almost disinterested, gait of opponents facing off. But this, as I learn, is all deception, sumo is a sport of willpower.
While the training may be perceived as gluttonous—with professional male sumos spending their days eating lunches washed down with beer and followed by long afternoon siestas—the rules of the game are rigorous. No part of the body other than the feet must touch the ground. Hence, a skilled wrestler must have a flair for acrobatic balance. Balance and the sumo wrestler? It is only when experienced firsthand that this paradox makes sense. I’m thinking about it when I find myself slumped on the ground.