Modi’s campaign collapsed the gap between contesting and winning 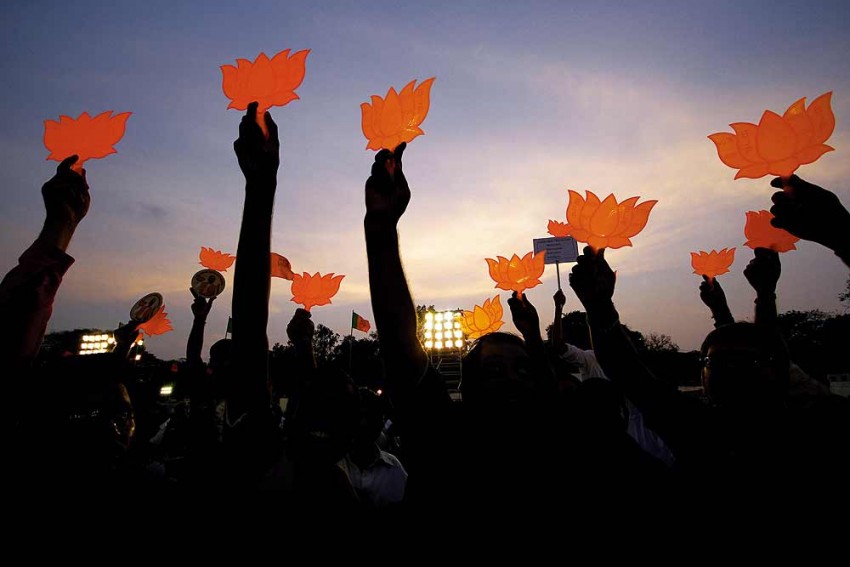 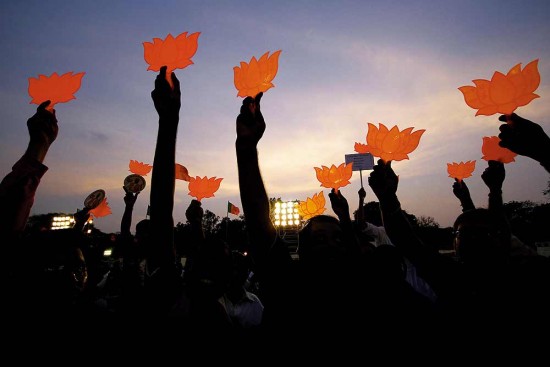 These words of the leader of the world’s oldest democracy best describe, a decade later, the newly crowned leader of the world’s largest democracy. An audacious act that has never been performed successfully in over 40 years—this sums up BJP leader Narendra Modi’s outstanding performance in the 2014 election, winning 337 out of the 543 seats for his National Democratic Alliance (at the time of writing). The enormity of Modi’s electoral achievement is simply unfathomable. Statis­tically, it’s even bigger than India’s shock victory, as a total underdog, in the ’83 cricket world cup.

In order to fully comprehend the magnitude of the BJP’s victory in the 2014 elections, it is important to delve a bit into the electoral history of India. There have been six identifiable “wave elections” in the country’s 67-year history (see first graphic). For the purposes of this analysis, a wave is defined as a national narrative as espoused by popular media and election rhetoric.

Over the long period since 1977, as the analysis shows, “national issues or waves” have had limited impact on vote or seat share for a national party. The anti-Congress 1977 Emergency wave and the 1984 Indira Gandhi assassination sympathy wave were the last two national waves to have had a meaningful impact on vote and seat share margins. National sympathy emanating out of the assassination of then prime minister Indira Gandhi in 1984 propelled the Congress party to a record victory in 415 out of the 543 seats and won them 78 per cent of all seats in the 12 largest states.

Since then, over the last three decades, there has not been such a galvanising national wave until this 2014 election, championed by Narendra Modi. No national party had thus far been able to capitalise on a somewhat favourable sentiment and gain more than 35 per cent of seats in the 12 largest states since the 1984 election. The BJP won an alarmingly high 61 per cent of these seats in the 2014 elections. To put that in context, during the 1977 anti-Emergency wave, the beneficiary party—the Janata Party—won only 57 per cent of the seats in these 12 largest states.

The Big 12—Uttar Pradesh, Maharash­tra, West Bengal, Andhra Pradesh, Bihar, Tamil Nadu, Madhya Pradesh, Karna­taka, Gujarat, Rajasthan, Orissa and Kerala—account for 440 (82 per cent) out of the 543 seats in the lower house of Indian Parliament. There are dominant regional parties in eight of these 12 states. An astonishing fact is that even during the height of the 1977 anti-Congress Emergency wave, of the 12, the Congress won five—all of the southern states and Maharashtra. The states of Andhra Pradesh, Tamil Nadu, Karnataka, Kerala, West Bengal and Orissa—that account for 35 per cent (193) of all seats in the Lok Sabha—seemed completely immune to any national sentiment and, so to speak, voted as separate nations in themselves.

That India does not vote as one nation for its national elections may sound logi­cal to those who grasp the sheer diversity of the country. Reflecting this trend, the two national parties (the Congress and the BJP) contested fewer and fewer seats in the top 12 states with every passing election and entered into pre-poll allian­ces to give alliance partners seats—91 per cent seats contested by the two nat­i­onal parties in the 1991 election, 93 per cent in 1996, 79 per cent in 1998, 73 per cent in 1999 and 71 per cent in 2004. Ironically or perhaps not so, the winning percentages of the national par­ties inched higher as they contested fewer seats riding on the strength of the regional allies.

Even at the height of the anti-Congress wave in ’77, the party won in the four southern states and Maharashtra.

In the top 12 states, there was a negative 85 per cent correlation between the number of seats BJP contested nationally and its winning percentage, i.e. a very high probability the BJP would lose more if it contested more. Amidst this harsh backdrop of an unfavourable 20-year trend, the BJP laun­ched a nati­o­nal campaign with Modi as the epicentre and contested the most number of seats since the 1996 election. The party contested in 78 per cent of the seats in the top 12 states vis-a-vis 62 per cent in 1999 when it won the election. The second graphic captures the monumental achi­evement of the Modi campaign—collapsing the gap between contesting and winning and reversing a 25-year trend. This is what the venerated mathematician Nassim Taleb calls a ‘Black Swan’ event.

This achievement has enormous implications for the political future of India’s federal government. Thus far, the functioning of the central government in New Delhi since 1996 has been cram­ped by regional parties and largely run on their veto power, with euphemisms like the Common Minimum Progra­mme to appease everyone’s interests and achieve very little. With this victory, Modi has demonstrated the prowess of a national party and can be a sign of increased confidence for both the national parties to take centrestage again.

The BJP’s strategy to risk spurning alliances with regional parties at the cost of going solo under Modi’s leadership was a daring gambit. And the icing on it was the launch of Mission 272, i.e. win a majority of seats single-handedly, something no poli­tical party had achieved since 1984. Predict­ably, this irked many powerful regional leaders, particularly in Bihar, Orissa, West Bengal and Tamil Nadu, who post­ured and threatened to form a third front and take the election away from the BJP. History was in their favour; national parties have never won these states sans an alliance with regional players.

The BJP thus was forced to break new ground in these states and/or win their traditional states by a handsome margin, if it harboured hopes of achieving 272. This is exactly what the party did—it won a whopping 90 per cent of all seats in the states of UP, Maharashtra, Bihar, Madhya Pradesh, Gujarat and Rajasthan, which accounted for 45 per cent of all seats in the Lok Sabha. Such has been the comprehensiveness of BJP’s victory in the 2014 election. The extent of dominance of the party in the Hindi-speaking states is evident from the third graphic which shows the percentage of seats won in the ‘Hindi’ states and ‘non-Hindi’ states.

Path-breaking perhaps best describes Narendra Modi’s victory in 2014. He has stoked expectations and aspirations in every Indian with the inconceivable and comprehensive quality of his victory.