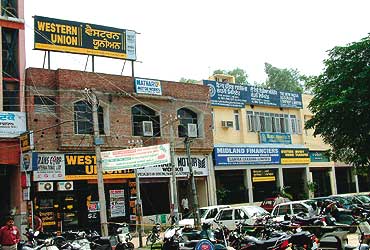 outlookindia.com
-0001-11-30T00:00:00+0553
R.A. Umaid, 56, checked into Chennai's Apollo Hospital for a routine check-up. The doctor gave him a date for surgery: the next day. Frantic, Umaid called up his son in New Zealand who wired him Rs 2 lakh through IndiaPost. It reached him the next morning; a life was saved.

Gurdial Singh runs his own car repair shop in Bahrain and uses Western Union as a convenient way to send money for household expenditure or emergencies. For bigger amounts or for investment, he wires the money to his nri account in a bank in Nawan Shahr, Punjab.

Amidst the din about India's miserable performance on the FDI front and the surging nri deposits dubbed as 'hot money', one significant fact has made a quiet and unshakeable entry. Workers' remittances, or money sent home by emigrant Indians, have now touched $11 billion, pushing India to the top slot among all developing countries. That's five times our FDI, about 30 per cent more than our software earnings, 27 per cent of exports, 3 per cent of GDP and 73 per cent of regional remittance flows.

The rush of figures is intended to buttress the fact that remittances are getting to be the second largest source, after FDI, of external finance in poor countries. Over the past decade, remittances worldwide have risen 44 per cent to reach an estimated $138 billion last year, and are projected to grow an additional 28 per cent over the next three years, says the Nilson Report that tracks payment services in the US, the biggest source of remittances followed by Saudi Arabia.

According to RBI balance of payments data, private transfers from Indian emigrants came to $12.2 billion in 2001-02 and $11 billion in April-December 2002, the latest available data. Unofficial transfers, through couriers, hundis and hawala traders—which have dropped sharply of late but not disappeared—could add another $3-4 billion to the total receipts.

What has brought about this sudden upturn in remittances? More migrations, naturally, with 20 million expat Indians and their eager relatives trailing them. But it's also the ease of transferring money now as opposed to a few years ago which is forcing people to use the regular, official channels instead of the unofficial, often illegal, ones. Says P.C. Narayan, president, Global Trust Bank: "Stiff competition in the remittances arena has resulted in innovative services and reduced cost to the customer. Given the intense competition, it is fair to expect that cost could come down further though not as fast as it has happened recently."

But independent transfers are costly affairs, almost double of that through banks in India, so money-transfer companies like Western Union Financial Services International—the billion-dollar-profit global giant which founded the stock ticker and the credit card and conducts 60 million transactions every year from 1,50,000 locations—mostly process small-value transfers.

Present in India since 1994, Western Union expanded its reach almost overnight by tying up with IndiaPost in January 2001. Says Alok Pande, assistant DG, IndiaPost: "It's been a win-win situation for both. Money transfers are our most profitable (per transaction) business now with a minimum size of $500-$600 and an average profit of Rs 500 per deal." The 4,000 linked post offices are 14 per cent of the 12,500-strong Western Union network which includes Sita Travels, Bank of Punjab and a host of small agents. Punjab alone has 5,000 locations, says Anil Kapur, the firm's regional director, South Asia. The Doaba area of Punjab, where virtually every household has at least one emigrant member, is dotted with Western Union agents doing roaring business. Says Pal Pabla, the biggest one of a dozen odd in Nawan Shahr: "Two years ago, I started by delivering about Rs 5 lakh a month.Now it's Rs 75 lakh a month and I expect it to double in two years." He reckons Rs 5-8 crore of forex is coming into the district every month, mostly from the Gulf countries.

Says V.K. Soni, who runs his agency from a booth under the stairway of a commercial complex in the Doaba area: "Most of our customers are those who used the hawala channel. We are now eating into that clientele." Satnam Singh, a mechanic in Bahrain, agrees: "This is better than hawala which, despite quicker delivery, was risky." (The recipient, in private transfer, has to quote a 10-digit number used by the sender and show identity proof.)

But the speed comes at a cost—going up to $60 for sending $1,000 from the US—whereas banks take the much cheaper wire/mail transfer route which may take anything from two to 21 days. Banks are also using online transfer now—here there is direct debit as well as the facility to track your packet online. ICICI Bank and Punjab National Bank have the services, while Remit2India.com has tied up with uti Bank. There's also the cheque-box facility which costs about $10 and takes five days and where a forex cheque deposited with a foreign bank is forwarded to an Indian bank. However, all these can be done by a designated forex branch. Banks like PNB also take the responsibility of forwarding a draft sent from abroad. Says Satwinder Kaur, a housewife in Nawan Shahr: "Earlier, the postman usually knew of its arrival before me and would pester me for a little tip for delivering it fast."

Now the post offices themselves are conducting transactions in 15 minutes. Offices without a PC take 15 minutes more as they have to fax the request to a nearby PC station. They also offer a loyalty card for regular recipients so as to minimise the identification process. Says Pande: "Post offices serve a social purpose by catering to far-flung areas where people don't have a bank account or are too poor to maintain one. A missionary in an Aizawl village can get the same service as a Delhiite."

Faced with competition and the need to expand business, Western Union has slashed rates. According to Kapur, rates vary between 0.5 per cent to 4 per cent, or say, for $1,000, a charge of $22 from the US and $10 from West Asia. Does that mean profits? Kapur won't say, except that growth has been 89 per cent in the number of transactions over 2001-end and 71 per cent in revenues. Clearly, the business is still a fraction of India's huge potential and will grow only if the RBI relaxes rules that don't allow single transactions above $2,500 and more than 12 of them per year.

In fact, with the interest rate arbitrage disappearing recently, the big investment transfers (to buy property or to invest in shares etc) through banks have almost dried up. Some banks in Punjab reported a 50 per cent drop in remittances. To break the fall, bank officials recommend India go the Pakistan way, offer incentives to lure more official remittances. And money transfer companies look at revising costs by exploring more tie-ups. The World Bank estimates that even a five per cent drop in transfer costs would mean a $3.5 billion saving for expats, money that otherwise belongs to the developing world. And with an average size of transfer at over $1,100, India's banks have the most to lose if they don't rush to catch the ever-swelling tide.