The Outsider Crosses The City’s Path

Does the IT capital hate outsiders who come to live there? A mob attack provokes disturbing questions. 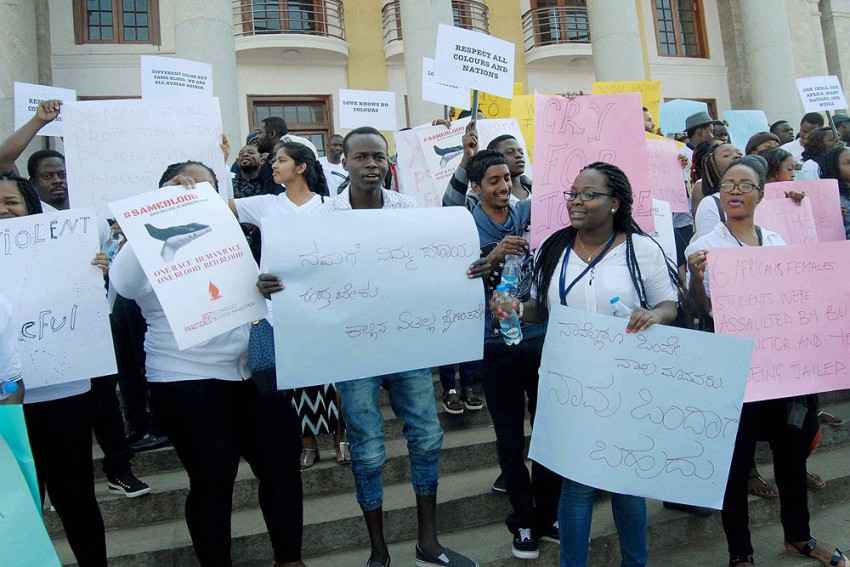 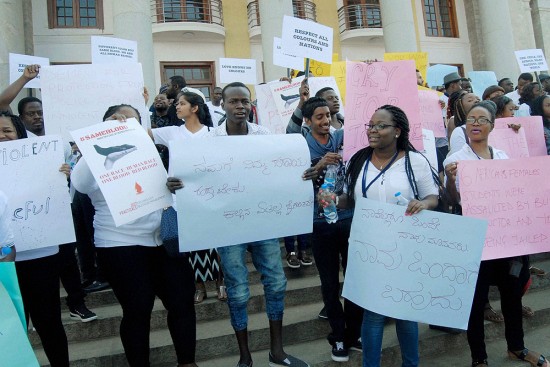 “Bangaloreans are so racist that they speak to visitors in Hindi, Tamil, Telugu, English...if nothing works, then Kann­ada,” went an online retort last week amidst soc­ial media outrage at how a city basking in a tech-driven glow can be so hostile to outsiders. It was the Bangalorean hitting back at typecasting comments about a city that’s home to a large, multicultural population grabbing headlines over a horrific incident of mob violence on a group of African students last week. It isn’t the first time the accusation has been hurled­—and countered.

Wandoh Timothy, 48, is an ironic voice who affirms Bangalore as “the place to be”. He’s frank about it: he has lived here for eight years and travels frequently to other Indian cities on work. His two children go to school here. But he still suffers from a kidney problem, one caused three years ago when he was beaten up in Hennur (a locality in east Bangalore) by a motorist baying for a fight, calling him a Negro. It left him with a damaged cornea, two broken ribs and a kidney injury. Wandoh, who’s from Chad, is just as frank about all that’s wrong with the city. Racial discrimination? Yes, he says he faces it all the time. And, there’s plenty of cynicism in his voice as he says it isn’t going to go away soon.

“It’s very complicated. Bangalore is growing, people have to adjust to change, but people are also not ready for change,” he says. He’s been here long enough to know the city’s boundaries have expanded so fast and its booming economy is home to so many cultures that a certain reaction may have set in. Horamavu Agara, the eastern locality he stays in, was a village when he arrived in Bangalore, says Wan­doh. “Overnight, Bangalore developed. The newly arrived don’t know the genetics of Bangalore. So they think ‘Oh, it’s a beautiful city, I can walk around and do whatever I want.’ When there’s lack of information, some people become victims,” he says. Many localities in east Bangalore have large populations of foreign students and people from the northeastern states, who too often complain of bad treatment. The unease of local residents, at least with foreign students, is palpable, with complaints about them being noisy, getting drunk and behaving badly and driving rashly. It was a road acc­ident in Chikka­banavara, a northern suburb around 20 km north of the heart of city, in which a resident died, that tri­gge­red the horrible attack last week on hapless Tanzanian students who were merely passing by. 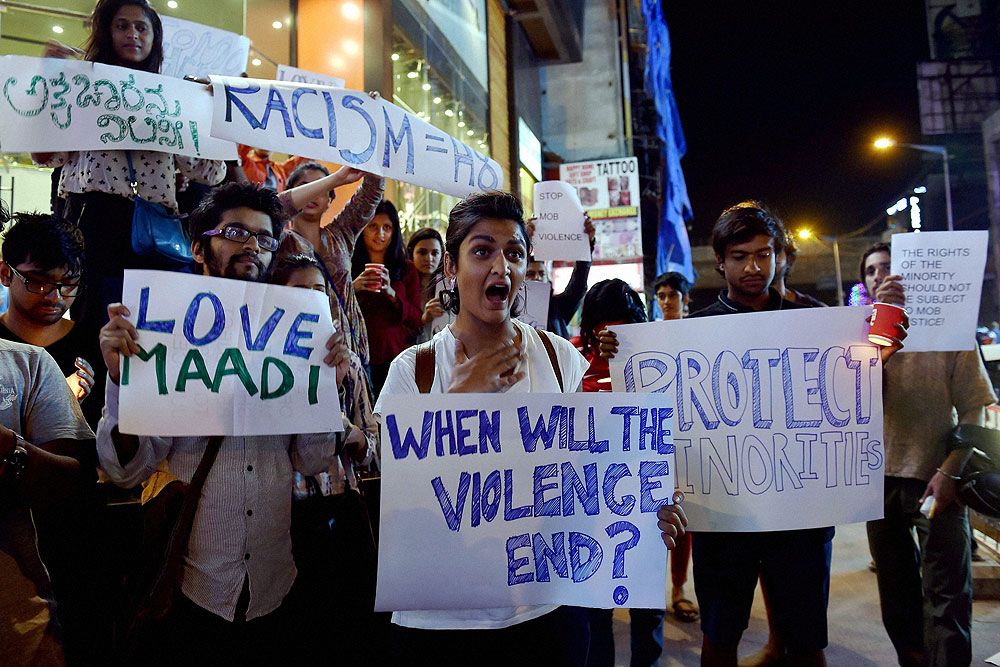 Solidarity Young Bang­loreans speak up against the racial hatred

There have been skirmishes before. Last year, following one such episode, the pol­ice put in place a coordination committee to discuss local problems. African students, they estimated, account for a fourth of the 24,313 foreigners in Bangalore in 2015. “To some extent, people must realise Bangalore is really growing and we are invading villages. The residents might get a little bit agitated, a little frustrated but you cannot generalise (about foreigners) because of one or two incidents,” says Nader Mohan­desi, a surgeon and long-time Bangalore resident well known for his stint as a drummer with Millennium, one of India’s earliest heavy metal bands. Mohandesi, who’s from Iran, runs a hospital in Kot­hanur, a locality teeming with a multicultural population. Many of his patients are African students who, he says, mostly keep to themselves. “At the same time, I must mention, they are students after all: they have to deal with frustrations and the fear of tomorrow. A bit of partying and drinking is okay, as long as they don’t invade anybody’s privacy. People must realise the foreigners are under pressure too. It’s not like they have loads of money and are here to have fun. They aren’t tourists,” he says.

After an accident involving a Sudanese, a group of Tanzanians who were merely passing by was attacked by a mob. A woman in their car was stripped and assaulted.

The recent incident has once again started debates on whether the city has always had an undercurrent of xenophobia: for instance, there was a backlash against Tamil films in the 1980s. “I think such hostility has possibly always been there to an extent. Maybe we would like to believe Bangalore has been historically cosmopolitan and always welcoming of the outsider, but I don’t know if that’s more of a narrative we would like to believe,” says Brinda S. Narayan, author of Bangalore Calling, a book on the city’s call centre industry. What she’s referring to are the old divisions that once marked a sleepy little town that somehow melted away when the IT boom played out. What the new economy led to, as many reckon, is different groups that have from time to time gained dominance and weighed in on city policy. Like the growing clout of the IT industry and the frequent call from Kannada groups for reservations for local people in software jobs.

Incidentally, the BPO industry, at least a few years ago when Brinda was researching her book, wasn’t immune to discrimination. That was because call centres were catering to different geographies and partly also because Bangalore’s back-offi­ces were taking away jobs globally. “Definitely, they were victims of overt racism often. There were very explicitly racist calls,” says Brinda, who worked for over 15 years in the industry. “A lot of people in the US were disgruntled at losing their jobs and resented the fact that an India-acc­ented person is picking up the phone.” 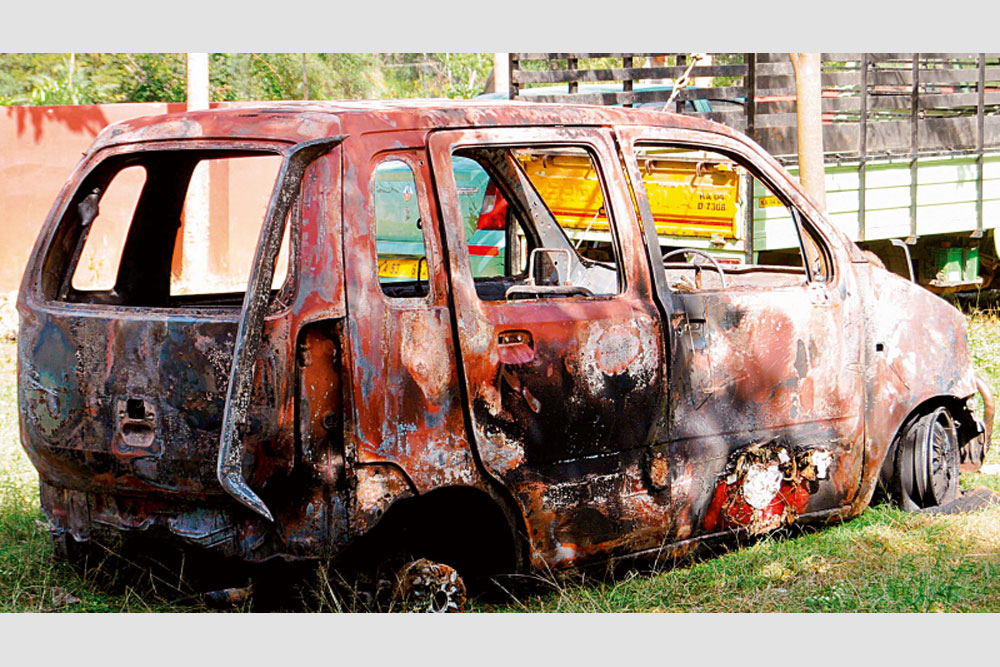 Unlike many state capitals, Bangalore’s dynamics are somewhat unique, because the Kannada-speaking population isn’t overwhelmingly dominant in numbers.

It was just four years ago, in 2012, that some fear-mongering led to a panic-str­icken flight of people from the northeastern states from Bangalore, crippling many businesses, notably hotels and security service sectors. “The situation has eased tremendously,” says Dr Lalrinawmi Ralte, president of Northeast Solidarity, a forum set up in 2012 after the episode. The forum gets fewer calls on the helpline now. Ralte, a professor of theology, volunteers as a traffic warden and encourages the community to get more involved in city affairs.

There are an estimated three lakh people from the northeastern states, mostly Assamese, in Bangalore. Ralte, however, doesn’t think Bangalore is hostile to outsiders: the city is her second home, she says, having lived here for 25 years. But the attack on the Tanzanian student was certainly racist. “Anything targeting a community is racism, nothing but racism. There was a gap between the accident and the (Tanzanian) lady driving by. And they didn’t know each other,” she says. There has been a fair amount of discussion on social media, with many saying they couldn’t label the incident as racism, she admits. The Tanzanian high commissioner too said it wasn’t a case of racism after his visit here. “But why should the lady pay for it, when she was not responsible for anything?” Ralte asks. There will perhaps be no clear answer, but the incident has certainly left Bangalore tarnished.