The Night Halted At The Caravanserai 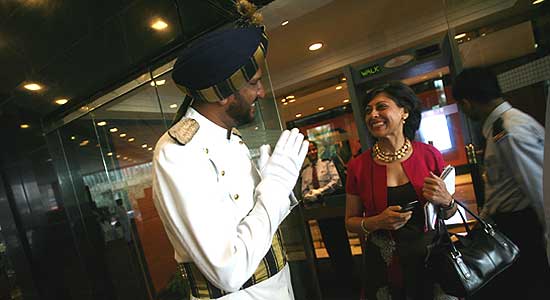 The idea is more potent than its execution; the symbolism more devastating than casualties. Coup leaders used to seize radio stations to deliver their message; terrorists choose urban icons. Far too often in the past 16 years, Mumbai has heard the staccato burst of the deathly Morse code, and watched its vaunted totems drop to their knees. But they have always staggered defiantly to their feet. The dream prevails.

On March 12, 1993, 13 blasts in quick succession blew out seven power towers, from the Air India building at Nariman to Sea Rock Hotel at Bandra. The devastation of 26/11 was restricted to six locations in the heart of south Mumbai, but they were chosen with brutal precision to inflict maximum symbolic damage, and rivet eyeballs to TV screens. 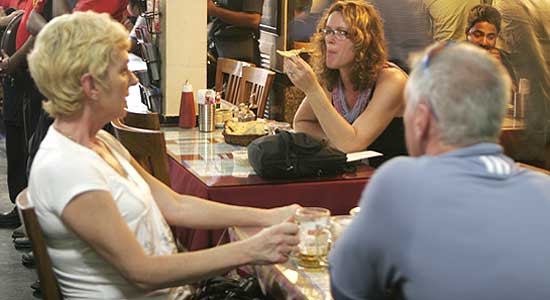 Guests at the Leopold Cafe a week after the horrific acts

The railhead of CST, Metro junction, Cafe Leopold, The Oberoi Trident, the Taj Mahal Hotel and Nariman House. The battle was most prolonged at the latter three locations, and the TV images of the Taj’s burning dome, the sniper at the Oberoi’s window, and commandos swinging over Nariman House will be embedded forever in our memory. This was Terrorism Live. The other three killing fields faced the quick acute attack, the butchery captured after it was over.

The Taj, oberoi and leopold didn’t surface in some random tic-tac-toe of 26/11 plotters. They coalesced into the idea of mumbai.

The Metro junction was an incidental martyr, but each of the scheduled targets had an agenda. The most mocking laugh rang out from the two hotels which symbolised Mumbai’s twin personae of corner office and pleasure dome. Cafe Leopold you might think was a scruffy intruder into this glitzy doom club. But it was no less hallowed a spot for thousands with wanderlust in their backpacks.

Jointly, these three inns represented the city’s position as a global caravanserai. Mumbai is Mumbai because it has been the place where the world has always halted to jangle its shekels and load and unload goods, services, cultures and ideas. Which is why the Taj, Oberoi and Leopold Cafe did not surface in some random tic-tac-toe of those plotting the terror itinerary. In the world’s mind, they coalesced into the idea of Mumbai.

The Taj most of all, for it was built in 1904, seven years before the Gateway of India which it equals in cliche and overshadows in splendour. Give grudging credit to these jehadis for hitching a ride on history on their way to paradise. They chose the heritage wing, not the modern minaret of plate-glass power. In the ballrooms, bars, corridors and crevices are stored a city’s memories. As in all the historic hotels of the world, this was where classy generations came of age, celebrated their prime and faded graciously. 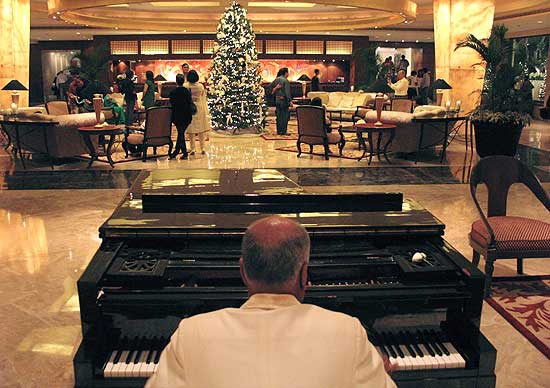 The lobby of the Taj Mahal Hotel after its opening on December 21, 2008

The conviviality of the Harbour Bar was something newer watering holes would kill for with their last olive-speared toothpick. The Sea Lounge has been the oasis of gentility, or the successive avatars thereof. It is the place where titled scions dallied with ivory-laced damsels and where neo-aristocracy sized up potential brides over chilli cheese toast. The three Parsi dowagers who sat all day on the sofa outside have passed on, but the Coffee Viennoise goes on.

Which was why the smoke billowing out of the upper windows covered the very soul of Mumbai in soot and disbelief. And the brave dome holding out valiantly against the grenades was worthy of an epic. It was the triumph of civilisation over the force of brutes.

The Oberoi had arrived seven decades later, but it had its own place in popular imagination. Rai Bahadur M.S. Oberoi, born six years before Jamsetjee Tata threw open the Taj gates, had given India its first hotel chain but had always chafed about his empire lacking the crown. A chain without a presence in Bombay was like duck without sauce l’orange.

He had bought the land when it was still under the sea, quoting a price which was
Rs 1,000 per sq m higher than the next bid, and which had led Sir Dorab Tata to exclaim, “Rai Bahadur, have you gone mad?” The cost of construction on soggy reclaimed land, at a height aspiring to dwarf all the other new swaggerers of Nariman Point, had threatened to bankrupt the entire group. Redemption came in the form of the Beirut war, which diverted rich Arab holiday-seekers to Bombay. They flocked to the strategically positioned Oberoi Sheraton, transfixed by the monster monsoon waves crashing on Marine Drive.

The Irani Leopold Cafe may have more ‘Do-Not-Spit’ than polish, but it is even older than the Taj. Its signboard proclaims it was ‘Established in 1871’. It was initially a wholesale oil store, and much of its present ‘multicuisine’ salutes that legacy. Still it is the true caravanserai, one where backpackers, hippies and other flotsam on the crowded tide of Colaba must mandatorily wash up. Especially if unwashed.

Like the Causeway and Mumbai itself, Leo’s straddles the thin line between sleaze and legitimacy. Shantaram made it famous after Lonely Planet, and before the terrorists who announced their arrival in a flourish of AK-57 fire which left 10 customers dead, and the owners with a new swagger. Again with a typically Mumbai hit on the main chance, the Irani kinsmen quickly framed the bullet holes, and became the first unapologetic guides of terror tourism.

Yes, the city’s many claims to fame have always been equally divided between the glorious and notorious. In choosing these three hostelries, 26/11 death squads perpetuated the same indiscriminating mix.