Can Indian IT firms manage to move up the software value chain? 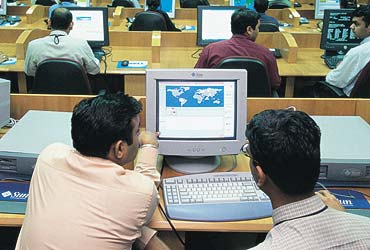 outlookindia.com
-0001-11-30T00:00:00+0553
It's being billed as the next big battle in the global software arena. In offshore circles, it's being termed as World War C. Having proved the efficacy of their low-cost offshore model, Indian firms are eyeing a big slice of the more lucrative pie—consulting projects. Instead of low-value, commoditised jobs, they're bidding for these high-value projects. Pitted against Infosys, TCS and Wipro are the big five global majors—IBM, Accenture, EDS, Cap Gemini and HP.

The stakes are high. In the next two years, outsourcing contracts (including end-to-end consulting ones) worth $100 billion are expected to come up for renewal; of these, $17 billion worth of fresh deals will be inked in the next six months of 2006. Claims Atul Vashistha, founder-CEO, neoIT, "The opportunity for Indian IT majors is huge." Adds Siddharth A. Pai, partner and MD, TPI India, "Increasingly, Indian IT service providers are bagging (high-value) contracts for remote IT infrastructure work too."

Looking at the potential, Indian biggies have drawn up ambitious plans and are making a serious play for the big game. TCS, for example, hopes that 5-10 per cent of its 2010 revenues will come from strategic and domain-based projects. With its proven strengths in telecom, retail and technology services, Wipro has purchased firms with consulting capabilities, including the recent acquisition of Nerve Wire. Forrester Research has rated Infosys as best positioned to compete with the big five consulting firms.

However, the crucial questions are: can Indian firms succeed and will their gamble pay off? Can they climb up the software value chain? Will India migrate from being a safe haven for cyber coolies (doing mindless, robotic work) to an established offshore location for high-end consulting work?

Before we answer these questions, let us take a look at the global software theatre. Typically, MNCs and others farm out IT work to IT consultants. Such all-inclusive deals worth $500 million-$1 billion each are bagged by a select group including the IBMs, Accentures and the HPs. Normally, they encompass areas such as defining problems, creating solutions, implementing them successfully and demonstrating their short- and long-term impact on the client's bottomline.

To cut costs, global IT majors outsource the non-critical slices of the job—maintenance, application development, and accounting—to firms in low-cost locations like India and China. The quarterly index data from TPI, a sourcing advisory firm, shows that 47 per cent of the outsourced IT jobs have such offshore components. Indian firms too bid for stand-alone deals of $50-200 million each, thus forming the bulk of the middle and the bottom of the outsourcing pyramid. Now, they want to displace the IBMs and the Accentures and wish to climb up to the top of the pyramid.

It's turning out to be an uphill task. This is evident from the fact that less than 2 per cent of the current revenues of the Indian IT majors comes from high-end consulting work. In Wipro's case, the figure is a dismal 0.14 per cent, or $25 million of the 2005-06 revenues of $1.8 billion. (Infosys and Wipro refused to talk about their consulting plans.) Ironically, the several advantages favouring the Indian firms in the offshoring business prove to be the main obstacles when they bid for large-scale consulting contracts.

For instance, Indian firms are known to deliver quality at extremely low costs. But costs will get skewed in the consulting business when they hire consultants at $250 an hour, compared to $25 an hour paid to a programmer. Add to this the twist that even the current manpower costs are rising, and, according to Sudin Apte, country manager, Forrester Research India, "they will keep rising by 10-12 per cent annually, thereby weakening the existing competitive advantage of Indian IT firms. " Therefore, if they do get into high-end work, the Indian firms will be caught in a bind.

Costs are likely to rise further as consulting work implies transfer of physical and manpower assets in the client's IT division to the software vendor. Indian firms are scared of making upfront investments. The reason: hiring consultants and investing in the client's IT assets will upset their profit margins, which will have a downward spiralling effect on stock prices and force analysts to downgrade expectations. Agrees Pai, "Indian firms can't take on such risks, as yet."

Scalability—or their ability to hire thousands in a jiffy—is another advantage tomtommed by Indian giants. But, in effect, it's the low global headcount of Indian firms that's a deterrent in their bids for consulting deals. To cite some figures, Infosys has 58,000 employees across all centres, IBM has nearly 45,000 on board, including those at its BPO outfit, only in India. Moreover, the foreign majors have built up scales across the globe, while Indians are just about ramping up their foreign centres, as they focused more on the offshore model.

The IBMs and the Accentures have a truly global delivery model. Explains Kris Wadia, partner (global delivery network), Accenture, "Once the global CIOs peel away the marketing minutiae, they want all centres reporting to one person, who will take a call on quality, execution and costs; having dots on a global map doesn't make for a global delivery model." Others agree that Indian firms need to go a long way before they can have a global footprint comparable with those of the foreigners.

Finally, Indians have always pointed out that they have successfully outwitted the foreigners in the strategic war. However, the tables have turned a bit now and the foreigners are aggressively building up offshore capabilities in India and China. Some of them, like EDS, have also acquired mid-sized Indian firms to save time. In contrast, the Indian biggies, apprehensive about large global acquisitions, are buying out smaller firms. "Small buyouts don't bring in consulting muscle," feels Pai. Concludes Apte, "It's easier for global majors to ramp up than it is for Indian firms to break into high-end consulting."

Despite the odds stacked against them, the Indian firms are breaking into consulting. Some have bagged huge contracts. Clients are also shifting from single-block deals to modular ones by breaking them up, and that's helping Indians to bid for those contracts. Many Indian vendors are now offering a clutch of services, thus improving their chances of winning mega deals. Constant innovation and flexibility has allowed Indians to remain in the hunt. But as the big 5 learn the new rules of the outsourcing game, Indian firms will have to shore up their strategies to stave off the former in the offshoring business and scale up fast to bite into the consulting pie.