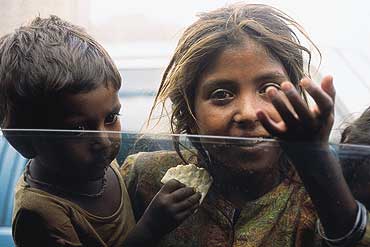 An expected backlash, perhaps, in a city where lakhs scrounge for survival on its mean streets. Homeless, aged, disabled, penniless men, women and hapless children, who beg and sell at traffic junctions through sweltering summer days, and sleep fitfully on the pavements on freezing winter nights. Sure, vagrancy is ugly, begging undesirable and best discouraged, child labour deplorable, and edging in and out of the maddening rush of vehicles to sell two-bit wares hazardous. But then, whoever said the solution was as simple as banning all of this? Can roads be so easily wiped clean of all the dilemmas that plague development in a country as poor as ours?

For his part, Delhi's JCP (traffic) Maxwell Pereira loathes such fuzzy thinking over the new rule. He's clear about his mandate. "And if anyone tells me that begging and vending at crossings is not detrimental to the flow of traffic, I'll ask their heads be examined. Plus, begging portrays an adverse picture of our country." With hoardings discouraging people from giving alms, and over 150 prosecutions already in the first four days of its enforcement, Pereira says the new rule is a success. Any criticism of it, observes the top cop, is a result of today's "pseudo and hypocritical" thinking: "We'll hate interruptions in traffic, say beggars and cows are the biggest nuisance on our roads, blame the traffic police for not doing anything and then criticise measures taken to correct the situation." Eradicating poverty, rehabilitating vendors and beggars, creating shelters for children are responsibilities of other departments. Declares he: "I'm not an all-encompassing administration, but only one of its wings and I am doing my duty."