A brand MBA in itself is no assurance of quality. Innovate and 'get real', that's the masterplan. 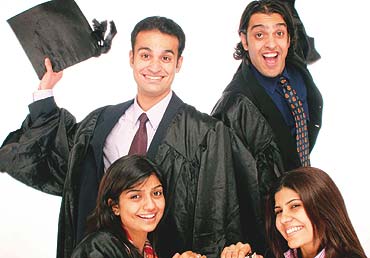 outlookindia.com
-0001-11-30T00:00:00+0553
As has been the case in the past few years, the last academic session was a phenomenal year for Indian B-schools. There’s been a marked improvement in terms of pedagogic initiatives and placements. Several of them have started new programmes and introduced innovative courses and electives. A few have invested huge amounts in upgrading infrastructure; the near future may witness the setting up of world-class campuses. Consistent 8 per cent plus GDP growth rates have also had a positive impact on placements—average salaries for top B-schoolers jumped by 15-20 per cent.

Taking into account the fast-changing contours of Indian B-schools, this year’s Outlook-Cfore annual ranking too has undergone a change. Instead of a singular ranking comprising all categories of management institutes, we now have four separate rankings. There’s an overall top ten, and then three separate rankings for government-aided autonomous institutes, university departments and private B-schools. In addition, we have the customary listing of sectoral schools which specialise in niche areas. The reason for segregating schools is because the functional constraints are different for the three categories and, therefore, it’s unfair to compare them against each other.

However, the survey makes sure the performance of each school on different parameters is measured against the best, irrespective of the category. This ensures a uniform ranking system. The survey doesn’t include the Hyderabad-based Indian School of Business (ISB) due to its unique business-and-education model. But for the first time in many years, all the IIMs form a part of the ranking. While IIM-Ahmedabad voluntarily participated in our survey, the Right to Information Act was used to ferret information from the others. We were keen for information from the government-aided institutes (like the IIMs) to know whether they are using the taxpayers’ money effectively and efficiently, and contributing to enhance the quality of management education in the country. 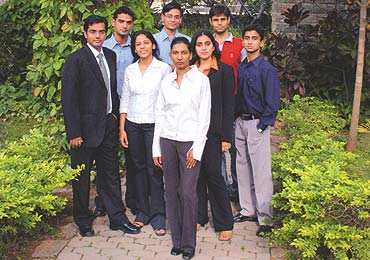 IIM Bangalore still holds on to the No. 2 spot

For, over the years, educationists have observed that a mere brand tag doesn’t lead to quality education. This applies to the IIMs too. Although the three known IIMs—IIM-A, IIM-Bangalore and IIM-Calcutta—are the top three B-schools this year, two others—IIM-Indore and IIM-Kozhikode—don’t appear in the top 10 overall listing. A major reason for their bad performance is location disadvantage. For effective industry linkages, any B-school should be near a corporate hub. Explains Pritam Singh, ex-director of IIM-Lucknow, "To achieve excellence, a B-school must have a business lab, like medical colleges have hospitals, that provides real-life exposure to live cases and projects." In light of the experiences of IIMs in Lucknow, Indore and Kozhikode, he questions the government’s wisdom in starting a campus in Shillong. Low-faculty compensation is another factor that affects many aided B-schools.

Even successful B-schools like IIM-A, IIM-B, IIFT, SJMSoM, IIT-Bombay and NITIE are forced to initiate new things to stay at the top. IIM-A, for example, has strengthened international linkages by increasing student exchange programmes with 45 institutions, up from 22 in ’02. It now has a strategic agreement with the ESSEC Business School, Paris, providing collaboration in areas such as student exchange, double-degree programme, doctoral student exchange at the level of dissertation writing, faculty exchange and joint executive education programmes. It also has research collaboration agreements with foreign universities like Stanford, Columbia, Emory, McGill and University of Leeds. IIM-A is also proactive in curriculum updating. As a result, at any given point of time, at least one-third of the electives are those that’ve been introduced in the previous three years. They introduced 15 elective courses in 2004-05 and 10 in 2005-06. And its centre for innovation, incubation and entrepreneurship is focusing on capacity building.

IIFT, which is also public-aided like the IIMs, has started social awareness programmes to expose students to social realities. "Cultivating sensitivity towards the downtrodden is imperative among future corporate leaders, as we are heading towards a major turmoil between the haves and the have-nots," points out director Probir Sengupta. It has a new faculty development plan under which members get three months free from classroom teaching. During this quarter, he/she is expected to undertake research besides offering MDPS. NITIE has introduced many innovations, making learning more experiential. One of them is direct selling where students are divided into groups of eight, each given four products to be sold directly to people on the streets. Each group is given Rs 3,000 of inventory and a minimum sales target. Students are free to decide pricing strategies, marketing methods, area of operations etc. Last year, the profits were donated to an NGO, Navnirmiti, which promotes scientific education among children. 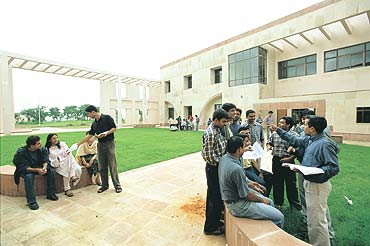 However, the pace with which B-schools respond to fast-changing socio-economic realities varies a lot between different categories and even within categories. The slowest to adapt are university departments, especially in areas like industry interaction, updating curriculum, international linkages and faculty development. None of them is in the top ten overall list and most won’t rank among the top 50. Many don’t even fulfil the minimum faculty strength criteria of AICTE. The saving grace for known ones like FMS and Jamnalal Bajaj is the intake of good quality students and strong alumni network. Still, it’s doubtful whether there’s value addition to the existing knowledge and the skills of students. As A.K. Sengupta, director, SIES, puts it, "It’s unfortunate that some of the university departments running MBA courses are still just cashing in on their old equity and consequent placement records. It’s a matter of time before they crumble." Unless drastic measures like more autonomy and better faculty packages are taken, there is little hope for them to stay on in the race for excellence.

As expected, there’s a wide variation in quality among private B-schools. The top end are striving hard to become world-class. In fact, ISB now has high international standards in pedagogy—even better than the IIMs. Be it competence of faculty, research or infrastructure, the school has established new benchmarks. In terms of new courses, programmes, electives and other initiatives, some private B-schools have kept pace with changing realities. For instance, ICFAI has done what the IIMs should have done. It has set up a management teachers academy to counter the acute faculty shortage. ICFAI’s proactiveness in case generation have also shown results—it’s now the third largest case-selling member in the European case clearing house. It has also jointly developed courses in collaboration with corporates like Deloitte Consulting (for US taxation) and Process Mind Services (insurance management).

But there’s a long way to go. To cite an example, organised retailing is probably the fastest-growing sector in India. Only a few institutions like BIMTECH, Wellingkar and NMIMS have programmes to cater to this need. Wellingkar, partnering with multi-commodity exchange (MCX), provides a 3-month training in commodity trading. Students are provided with a simulated trading environment. To facilitate paperless interactions, IMT and Wellingkar have also introduced new software solutions. Some B-schools have integrated a course on soft skill development where students get to work on topics like leadership skills, emotional intelligence and personality development. TAPMI has restructured its entire programme after consultations with the industry. It’ll now be based on a 60:40 ratio of classroom study and experiential learning. The latter part is in the form of workshops, projects and industry work. A required course for all students is a laboratory for entrepreneurial motivation. 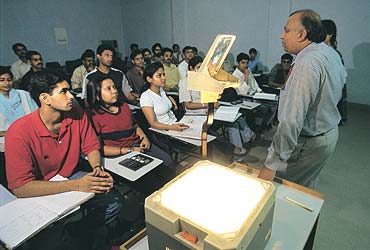 XLRI has introduced village-exposure programme for all students so that they experience the ‘other side’ of India. The institute also offers tailor-made courses for firms like L&T, M&M, BHEL and Accenture. S.P. Jain Institute has actively pursued the agenda of empowering BPL communities. Its project, Ankur, in collaboration with Cornell University, USA, is a co-creation of business between a corporate and a poor community. A pilot is now under way in a Mumbai slum. The idea is to develop entrepreneurship/generate income for the poor through the intervention of a corporate. It’s among the first schools to motivate students to take up community projects in social sectors.

In new-age B-schools like IMI, faculty members are required to, besides teaching, either train, consult or research. The extra revenues are shared between the individuals and the institute. Global linkages is another area where some private B-schools have taken rapid strides. MDI has 110 exchange programmes for students. MDI, ICFAI and Alliance Business academy are the only institutes in India to get international accreditation, although not the coveted AASCB and EQUIS ones. ICFAI and Alliance are also making campuses eco-friendly and energy-saving, so as to get green ratings from the world building congress. 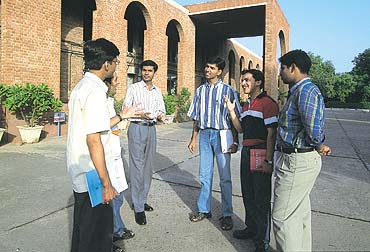 MDI Gurgaon holds its own, again

Still the majority of private B-Schools fall in the lower matrix with low performance on all critical parameters. In most such schools, fresh graduates pass off as faculty, and the schools are little more than glorified placement agencies. Value addition to students is worse than in the case of university departments. There have also been cases of students being duped, even as the regulatory bodies look on. The surplus generated through high fees is siphoned off into non-academic activities. The mushrooming of these dubious schools is primarily the result of the failure of excellent B-schools like the IIMs to either replicate their successful models, or expand student capacity in the past decades. If the IIMs had done that, there would be an IIM in all the major commercial cities.

Faculty compensation packages is also a matter of concern. With average packages in the Rs 2-3 lakh per annum bracket, it’s difficult to attract the best minds. It’s time the corporate sector, the main beneficiary of the system, becomes proactive in aiding performing B-schools. In promoting gainful institute-industry interface, India Inc hasn’t done enough. A few exceptions like ISB, which gets regular funding, do exist. The school recently got a $1 million grant from Goldman Sachs for one of its centres of excellence.

At this juncture in India’s economic history, B-schools have an important role to play. By training human resource, generating relevant knowledge and creative application of existing knowledge, they can play a leadership role. Some of them do understand their responsibilities. They will play a major role in the forward movement tech and management brings in the future.

(The author is director, Cfore)