The Nation Is Made Of These 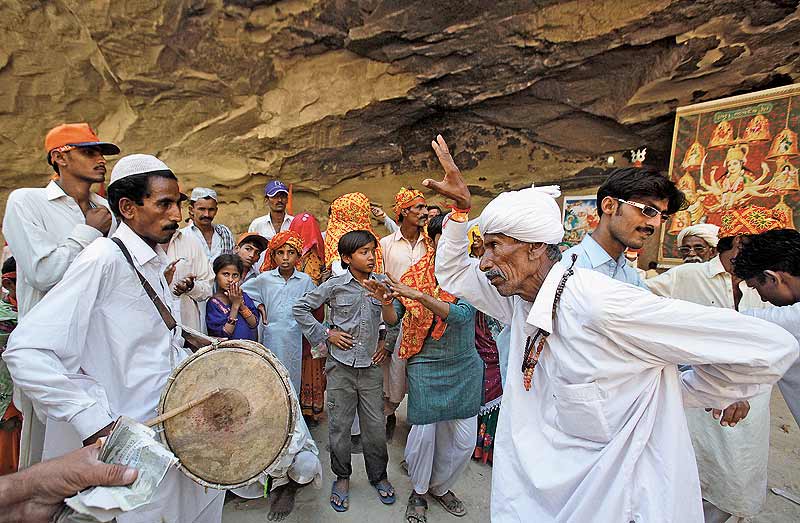 The further we move on from March 23, 1940—and from December 16, 1971, when the original Pakistan disintegra­ted—the stronger and deeper, and at the same time, more stressful, becomes the search for a cohesive sense of Pakistani nationalism.

Composed of several elements, Muslim identity is the prime driver of Pakistani nationalism, but not exclusively so. Non-Muslim identities are small, yet vital and intrinsic parts of Pakistani nationalism. Foremost among them are Pakistani Hindu and Buddhist citizens. In a foundational sense, Pakistani Hindus and Buddhists are the oldest Pakistanis. Their ancestors have lived upon the lands that constitute our territory for centuries before the first Muslims arrived, or before the first local was converted to Islam.

If roots in territory make people eligible to be regarded as ‘sons of the soil’, then these non-Muslims are the first sons and daughters of Pakistan. It is unfortunate that, in the name of a state entity created less than 70 years ago, peoples whose ancestors have lived on these very territories for over 7,000 years are now ‘minorities’. Worse, many of them are regarded (and regard themselves) as second-class citizens. Adherents of all non-Islamic faiths are ineligible, by virtue of their religion, to be elected president or prime minister. This is so despite the fact that Article 20 of the Constitution grants—subject to law, public order and morality—freedom to profess religion and to manage religious institutions. Article 25, which deals with citizens’ equality says, in part: “All citizens are equal before law and are entitled to equal protection of law.” This is further reinforced by Article 36, which obliges the state to safeguard the legitimate rights and interests of minorities, including their due representation in the federal and provincial services.

Working with Hindus, Christians and Zoroastrians for over 30 years in remote areas and in urban centres, this wri­ter has first-hand experience of their attitudes and act­ions. These non-Muslim Pakistanis have a deep love for Pakistan. They are proud Pakistanis, and contribute abundantly to the country’s progress—and little to its problems! Yet Pakistani Hindus are often regarded by segments of the state and society as Indian ‘agents’ or as being inherently disloyal to Pakistan. Such suspicion is a profanity in itself.

However, this does not prevent non-Muslim Pakistanis from rendering notable roles in all areas, from agriculture, business and law to education, diplomacy and politics.

Non-Muslim Pakistanis comprise only about three per cent of the population but symbolise at least 30 per cent of Pak­istani nationalism. This disproportionately large presence in the nation’s persona reflects the vision of Qaid-e-Azam. Jin­nah strongly opposed the partition of Punjab and Bengal. He wanted non-Muslim residents of these provinces to stay on and become Pakistanis. In May 1947, three months before Independence, he made a fervent appeal to Attlee to reject the Mountbatten and Congress plan to divide these two provinces. He wanted a Pakistan shaped by Muslim aspirations and balanced with the pluralism of other faiths.

After 1971, Pakistan and Bangladesh entered into the next phase of the continuous search for a sovereign, autonomous Muslim nationalism born in South Asia.

As a condition of identity, nationalism is a combination of fixed and fluid elements. In older nations such as Egypt, Turkey, China, Iran and Greece, parts of their respective personas are rooted in unchanging geography, language, ethnicity and shared memories. Other facets there are continually evolving as objective conditions change.

The search for Pakistani nationalism began unconsciously, when the first Muslim stepped onto the soil of South Asia over 1,200 years ago. Perhaps the search softened and was absorbed in other things for about 1,000 years as Muslims ruled parts of the region. Then came the failed revolt of 1857 and the fallout therefrom. Muslims faced the prospect of being non-rulers for the first time in about a millennium. They felt further weakened by an emerging nexus between the British and a Hindu majority.

K.K. Aziz, the eminent Pakistani historian, wrote in his book A History of the Idea of Pakistan that, between 1858 and 1940, there are 170 milestones in the evolution of the concept of a State shaped by Muslim nationalism. He lists the first step, ironically, not with a South Asian personality but with the speech made by a British MP in London. On June 24, 1858, John Bright surveyed the aftermath of the overthrow of  Mughal rule. He visualised that British rule would eve­ntually have to be replaced by “...five or six large presidencies with complete autonomy, ultimately becoming independent”.

Eighty-two years after that prescient observation came the Lahore resolution, introduced on March 23 and formally adopted on March 24, 1940. Yet, just six years later came the next turning point. A meeting of Muslim League legislators in 1946 asserted that their demand was for a single Muslim nation-state and not several states, as ambiguously inferred from the Lahore resolution’s text.

With the creation of the first version of Pakistan in 1947 and the survival of West Pakistan onwards of December 1971 come the next two milestones. The formation of Bangladesh represented the rejection of the state structure of the original Pakistan, but not the rejection of the two-nation theory. The large majority of Bangladeshis remain proud of their Bengali Muslim identity. They have no desire to merge themselves into an Indian West Bengal.

The preamble of the Constitution of Bangladesh refers to the “pledge (that) the high ideals and absolute trust and faith in Almighty Allah” will guide the nation. Though the state is titled ‘The People’s Republic of Bangladesh’ (unlike Pakistan, which calls itself ‘The Islamic Republic of Pakistan’), its con­­stitution says: “The state religion of Bangladesh is Islam but other religions may be practised in peace and harmony in Bangladesh”. Article 25 deals with the promotion of int­ernational peace and solidarity. Subclause (2) says: “The state shall end­­­eavour to consolidate, preserve and strengthen fraternal rel­­ations among Muslim countries based on Islamic solidarity.”

Separated, yet in parallel ways, Pakistan and Bangladesh entered the next phase of the search for sovereign, autonomous Muslim nationalism in South Asia. Due to its ethnic and linguistic homogeneity, Bangladesh does not face the supra-nation-building tasks that face Pakistan.

The assertion of the identity and rights of the several nations/sub-nations that exist in Pakistan—belatedly recognised by the 18th Amendment—strengthens rather than weakens Pakistani nationalism. Like other nationalisms—which, in turn, comprise a variety of identities—the ideal of Pakistani nationalism has the capacity to sustain and enrich diverse internal nations. But only if the distinct national identities of Baloch, Brahui, Pakhtoon, Hazara, Punjabi, Seraiki, Sindhi and others are given due respect. Other, older nation-states struggle to contain diverse nationalisms. After centuries of democratic coexistence, many people in Scotland want to secede from the United Kingdom.

The relationship between the evolution of the Pakistani nation and the Pakistani state is marked by parallel trajectories of internal conflict between their constituent elements. Even though, on the face of it, both suffered a fundamental negation with the secession of East Pakistan, the search for a more coherent nationalism and the struggle to secure a stable state vigorously continue in 2013.

The challenges facing the search for Pak­istani nationalism in the 21st century are multi-dimensional. They include the quest for a peacefully coexisting mos­aic of nat­ions and communities within the supra-concept of Pakistan based on equity and justice. They include the test of whether a historically strong centre can be safely deconstructed, while retaining strong,  merit-based armed for­ces that do not intervene politically, gradually cede influence in foreign policy and cease covert interference in internal conflicts.

The primary wellsprings of Pakistani nationalism are spi­ritual-cerebral, not ethnic-linguistic. For these two contr­as­ting sources of shared identity to converge, or learn to sta­bly coexist, it will take more, possibly indeterminate, time.

As we fondly remember the Lahore resolution, let us prevent extremist hate against the ‘other’. Let us enforce respect for our splendid diversity as the finest guarantee of our survival and progress.

(Writer and film-maker Javed Jabbar is a former senator and information minister of Pakistan. His latest book is Pakistan: Identity and Destiny.)