On the sidelines of the UN's 60th anniversary celebrations, India is busy negotiating the rocky terrain of nuclear energy cooperation with the US 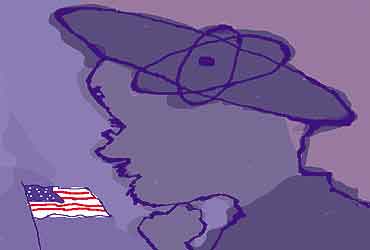 In 1798 Napoleon invaded Egypt. Britain concluded that France's ultimate goal was to open a route to India—hence began the Great Game which was to dominate British foreign policy for the next 150 years and culminate in the partition of India in 1947. As part of the response to the French threat, Britain signed a defence treaty with the Shah of Persia in 1801. But in 1804, when Russia attacked Persia, the Shah invoked the treaty to ask for British help. But he was refused aid on the grounds that the treaty had been intended to deter France and not Russia. It came as a shock to the Shah. He came face to face with the fact that hegemonistic powers interpret their commitments to suit their needs. An alliance with Russia would after all pay greater dividends than one with Britain, he concluded. In the late 20th century, several countries, not least of them our neighbour Pakistan, learned the same lesson from the us. In the past few days, India too has had a taste of this medicine.

Prime Minister Manmohan Singh set out for New York on September 11 to participate in the summit meeting convened by the UN secretary general to commemorate the 60th anniversary of the United Nations. Some 170 heads of states and governments decided to attend this 'most important meeting of the UN General Assembly since the organisation was founded in 1945'. In the decade since the Cold War ended, the international state system built up around the UN charter had become increasingly endangered. As the Soviet Union disintegrated and ethnic conflicts broke out all over Europe, Africa and parts of Asia, the UN was dragged into more peacekeeping operations in less than a decade than it had undertaken during the entire 45 years of the Cold War. The pretext for most of these interventions was the defence of human rights. This had raised fears in the international community that the major powers were bent upon using this pretext to undermine their national sovereignty.