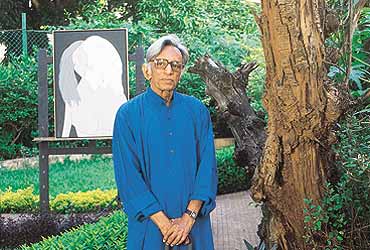 outlookindia.com
-0001-11-30T00:00:00+0553
The hammer fell at Christie's in New York, fixing the price at US $317,500 for Tyeb Mehta's triptych Celebration, and art lovers everywhere opened their eyes a little wider—to take a closer look at this masterpiece, reproduced on the front page of The Times of India on September 24, 2002. The privilege had not been accorded to any other work of art in a very long time by the paper, but then no other work had a price tag of Rs 1.5 crore attached to it. Besides, the triptych was its property and it surely has the right to rejoice at making such a large and successful sale.

When Tyeb was commissioned to paint the triptych some years ago, he had no idea it would be offered at an auction, especially since it was going to be part of an important, well-endowed museum in India. He has been keen that his major works remain here. But it has so turned out that a great many of his paintings are part of important foreign collections.

Before Celebration, Tyeb had painted another triptych based on a festival in Shantiniketan. At the time, I was chairman of the purchase committee of the National Gallery of Modern Art. I was anxious that this important work be part of the national collection and had told Tyeb as much. Various constraints, however, forced him to sell this triptych to Gallery 7 in Mumbai. However, Arun Sachdev, who was director of Gallery 7, was prevailed upon to sell the triptych to NGMA for the same price that he had paid. And that's how this landmark work came into the possession of our National Gallery. I have no doubt that Nandita and Amit Judge (of ToI) saw this triptych before they commissioned Celebration. There was no noise, nor were there any comments in the newspapers when Tyeb's painting was installed at ngma. To my mind it is as important a work of art as its successor Celebration. At least now, I hope it receives a little more attention, as indeed should other worthy precursors.

In a televised broadcast, the chief editor of ToI said that "when the idea of this auction was mooted, it appeared to be 'interesting'. Subsequent events proved this to be so and the sale of Tyeb's large triptych has created a 'benchmark'." Presumably this means that future sales would be based on this high water mark. That certainly is good news, though I am a bit doubtful that it will apply equally to other Indian artists. Certainly Indian art may receive greater attention, which in itself is a welcome development. The interesting question raised here is whether ToI which entered this exercise because it looked "interesting" will commission Tyeb again, keeping in view the new benchmark they helped create. I imagine that serious collectors as they are, they would be anxious to replace the major work they have parted with.

Complications arise when the money game starts to operate on objects of art. The simple transaction of a picture being painted and communicated to a viewer is liable to be distorted by the introduction of a large price. We cannot now visualise Van Gogh's Lilies without first thinking of the millions involved and then his own history of bankruptcy. However, if the viewer is intent, he can transcend the transaction swaddling a work and let it speak its own unfettered language.

This well-deserved success comes to Tyeb after a lifetime of struggle. Galleries found it difficult to sell his work earlier. The main reason, I suspect, was the element of angst which permeated them. It was not the upright figure but the one falling which attracted him. I had bought his first falling figure, painted thickly in oil paint. In 1968, I entered this painting in the First Triennale of International World Art which was juried by a very distinguished committee. Tyeb's Falling Figure was awarded the Gold Medal. We were tempted to think that this accolade would accelerate his sales.But they remained much as they were. He did not seem agitated and continued to work steadily at his Nizamuddin studio. His work was, and still is, central to his life. The fervour and passion which fills his days has staved off even some serious bodily afflictions. In any other person, it would have been time to bid farewell, but in his case time and again he seems seized, as if by a force outside of himself. It's as if time was running out or is it that the limits of his physical and mental existence were being tried. He has endured it all with patience. When I asked him once as to how he was, he replied with a small smile and a line from Faiz "...Hamari himmat hai keh hum phir bhi jiye jatay hain" (It's my courage that I continue to live).

And truly it is that himmat which has enabled him to face large areas of blank canvas with new propositions each time. To my mind, his singular achievement has been the complex interplay of independent linear elements with large blocks of colour which, while relating to the entire composition as a whole, have their own singular existence. His investigations into mythology too are unique. Keeping in view the disturbed times in which we live, he has reinterpreted ancient myths, not through easier modes of description and narration but by formulating wholly new icons within the language he has devised. This makes him a true descendant of Indian myth makers and an original commentator. Consider, for instance, his paintings on Mahishasura and their relationship to our time. There is no redemption in sight and therefore there is no Mardini. Whether one gets the message or not, or whether the painted image alters our situation in restoring the balance is not the question for the artist to contemplate. He has made an indelible statement which will forever bear witness to our times. Even Celebration, full of dance and song as it certainly is, carries within it the sacrificial goat. I'm reminded of Shelley's line—"Our sincerest laughter with some pain is fraught". If it is a complete picture and beholding it makes me feel whole, what more could one ask of a work of art?

I almost hear a whisper of the magic figure! That too is fine, as is the hope of better financial days ahead, expressed by so many in the ToI of that day. It may be just as well to remember that only particular and specific paintings scored high. Disappointment might await those led to believe that Alibaba's cave is now open. It would be as ridiculous to think as the Puss Moth trying to break the sound barrier.

(Krishen Khanna is an acclaimed artist whose book The Time of My Life: Memories, Anecdotes, Tall Talk was published by Penguin recently)