Reform of the lower judiciary is imperative, but a national service will run roughshod over the federal principle, social justice and linguistic rights 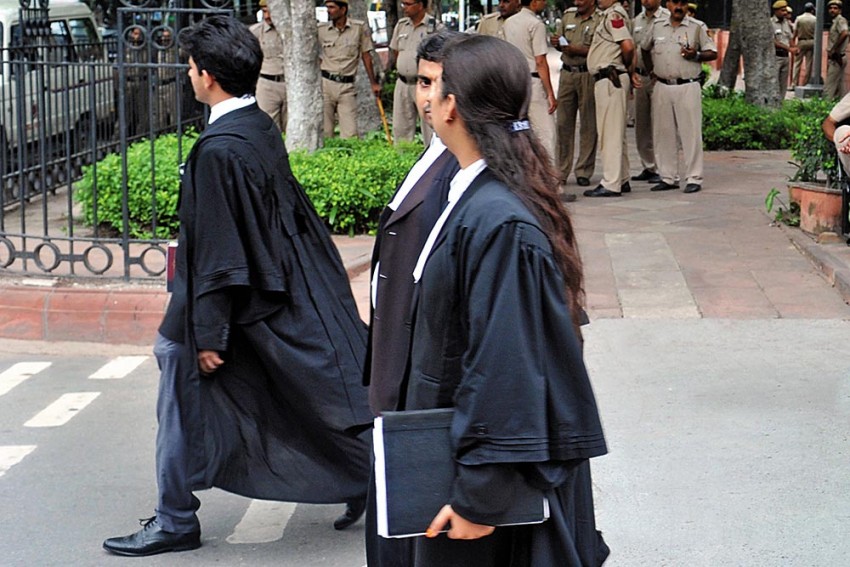 Judicial Diktat
Lawyers outside the Supreme Court, which is forcefully pushing the idea of an all-India service
Photograph by Tribhuvan Tiwari
Chandru Krishnaswami November 10, 2017 00:00 IST The Munsif’s Mother Tongue 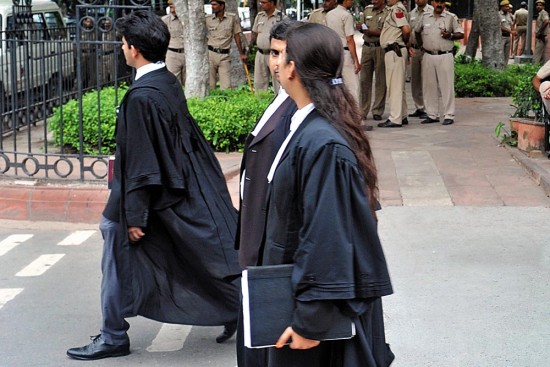 Since the Government of India Act, 1935, the responsibility of governing the judiciary below the high court level has always lain with the provincial government. The Cons­titution categorises the Supreme Court as the Union judiciary. Though the appointments and transfers of high court judges are made in the name of the President, the entire expenditure of running high courts is borne by state governments. Earlier, states had some say in the appointment of high court judges, but after the advent of the collegium system even that has been removed.

Appointments to the subordinate judiciary, tho­ugh, are in the states’ purview. Entry-level civil judges (junior division) are recruited by state public service commissions (PSCs). In Tamil Nadu, one or two high court judges sit as “experts” on the interview committee. But district judges are selected directly by the high court—they are treated as a service under the state government and the power of superintendence rests solely with the court.

Initially, the pay scales at entry-level judicial posts—magistrates and munsifs—were very low, almost equal to that of a lower division clerk in government service! It took long years of reform initiatives, beginning in the 1990s, before pay scales and other service conditions were rationalised by the Supreme Court. It also recommended a standardised nomenclature for posts across India, and a higher retirement age on the ground that entry into judicial service invariably takes place at a later age.

A national service will defeat the purpose of linguistic states and keep litigants at arm’s length.

In one of its directives, it suggested recruiting candidates straight from law colleges, without any previous bar experience, into the lower judiciary. The idea here was to emulate all-India services like the IAS and the IPS, even if sundry service rules had to be amended to enable this. All this was done in the name of insulating the judiciary from the executive. All states were made to follow its dictum. The Supreme Court did not have any qualms in bulldozing the states and making them fall in line even at the risk of interfering with the constitutional framework of the separation of powers.

It is in this vein that an All India Judicial Service is now being mooted. The idea is to have a common service even for the lower judiciary throughout India. I am against its adoption, which the Supreme Court seeks to accomplish by judicial diktat, for a variety of reasons. It challenges the power of states to set rules for the judicial services under them—and so will need a constitutional amendment.

In 2007, a circular was sent to all high courts to record their opinion. The majority rejected the proposal, citing its impracticality and the many structural problems it would pose. (In the Madras High Court, only two judges supported the idea, one of whom was from outside the state!) After ten years the same proposal is being aired in a different form. This time, they are not seeking any consensus—jud­icial dicta are to achieve the purpose. But the prop­onents should consider the reasons why, even now, some eight high courts have opposed the move, along with several state governments.

What is now being touted is the idea of a common entrance test (NEET style). This may sound good on paper and desirable as an ideal but the NEET experience offers an analogy of the issues it may create. One core issue is language: indeed, such a move could defeat the purpose of linguistic states.

Under the Official Languages Act, various states have switched over to the state language for administrative purposes. In Tamil Nadu, orders have been issued to have the lower judiciary adopt the official language of the state. This means arguments can be advanced in the local language, and the courts have to record evidence and deliver judgements in that language. This is not just symbolic nativism. It res­ponds to the reality that, with English, the vast majority of the litigant public are simply being cut off from the court proceedings. With the local language, they have a greater sense of participation.

With an all-India service, this policy will be the first casualty—it will be back to English. This when even present-day lawyers have considerable difficulty with English—many of them having had the mother tongue as their medium of instruction through school and college. This is why petitions and arguments before the courts, framed in English, are woefully inadequate in form and structure. That language is virtually butchered in the courts!

Besides, each state has adopted its own reservation policy in recruitment to the lower judiciary, with different percentages for the relevant social strata. With all-India recruitment, this social justice thrust will also be negated. And this would coincide with selection procedures getting more rigorous: most states have stopped recruiting via only interviews and now have an entrance test followed by an interview. This add­resses the allegations of nepotism and favouritism that plagued the system.

All this comes at a time when the number of asp­irants has ballooned thanks to better pay and service conditions and new courts. Constant promotions and retirements also create vacancies. To aid transparency and fairness up the chain, states have red­uced the percentage of direct recruitment seats, a quota has been created for promotion and also a sub-quota for selection by limited competitive exa­mination. Yes, several improvements can be made in the system but a common all-India test will only create a mirage of transparency.

The system can be improved in several ways, but an all-India test will only create a mirage of probity.

Even the collegium system for the higher judiciary has drawn flak about its quality, so a process steered by high court judges or states will not be immune to criticism. The selectors are not competent and the system is not yet foolproof. To address this in a thoroughgoing manner, state-level judicial commissions must be constituted. This would solve all the problems that an all-India service is supposed to address —the quality of question papers and interviews, the lack of secrecy, and favouritism.

The system does cry out for reform. Presently, selections to the subordinate judiciary (excluding district judges) are carried out by state public service commissions. Conducting an examination for thousands of candidates, ensuring secrecy around question papers, managing the exam centres and correcting the answer-sheets is an enormous task. No wonder the system also lends itself to distortions, PSCs are often accused of corruption.

Everything has an ad-hoc air at present and quality depends on the high court managing the show. To ease the correction process, objective-type question papers are prepared and the key answers circulated to the examiners! A state-level commission can put an end to such practices, and ensure that recruitment is carried out regularly. They can bring in the necessary reform without the problems a national service would entail.

The usual counter to the language issue—that the IAS/IPS seem to have surmounted the problem—does not hold. A judge has to read pleadings, record evidence and hear arguments in the local language or English, and finally write a considered judgement in the local language. The IAS/IPS do not have such a role. It’s not a question of favouring locals. The fact is that states have local laws relating to land tenure, tenancy etc. In a national service, lawyers may not opt for the lower judiciary fearing transfer and posting in a different language state.

Language-based reservations will also not work: a single service can never have that because there will be postings and transfers all over India. There can be no additional linguistic criterion. The Supreme Court anyway does not give  any special weighting to minority languages, and an all-India judicial service pushes the idea of linguistic uniformity further—but we celebrate our unity in diversity. A single language-based system will create several hurdles; translators are expensive and not easily available. In one film censor case, I translated a film word-for-word so that Justice A.P. Shah could und­erstand it, but it’s a cumbersome process.

(The writer is a retired justice of the Madras High Court)

An Actor Prepared In Wasseypur