The Muddle Of Nowhere

Some trips just fail to deliver. Here, a cab ride one moonlit night ends up as the sole solace. 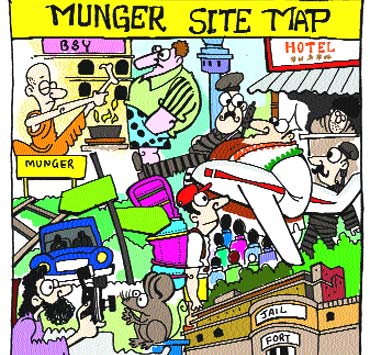 outlookindia.com
-0001-11-30T00:00:00+0553
Munger has given us the fictional Mungeri Lal, our proverbial marker of small-town anonymity. My research told me this ancient town had a magnificent fort situated on a bend in the Ganges, picturesque hot springs in the midst of a forest grove—both of which were favourite subjects for 19th-century British landscape artists—and the famous Bihar School of Yoga, located above the fort. All considered, it seemed just the destination for our year-end theme.

My journey must have started at the rahukalam. From the moment I boarded the Patna flight, the omens did not bode well. Fog in Delhi delayed our departure by an hour. That would still give me ample time to catch my connecting train to Jamalpur, a town one hour from Munger. But I hadn’t counted on waiting three hours on the tarmac as our plane joined the long queue for take-off. At some point, the Bihar governor, a fellow passenger, called for his security and his official car and left the aircraft in a huff along with his wife. That was enough to provoke the rest of us to vociferously demand the same privilege, as equal citizens of a democracy. Before things could get out of hand, the Air Traffic Control moved us up in the queue—His Excellency came back and our flight finally took off. By the time we reached Patna, it was dusk, and the Jamalpur train had gone.

The only option left to me now was to carry on to Munger by road. A night journey through the badlands of Bihar—even my mother-in-law would have stopped me from embarking on this one. But I said to myself, what the hell, I spend my life working in front of a computer, it’s time to live a little dangerously—like my colleagues who cover riots and floods, war, elections.... I got into an Indica taxi for the 170-km ride to Munger—at the government-approved fare of Rs 3,700—that takes about five hours to cover.

There was a surreal quality to this journey—it was a moonlit night, and the Bihar countryside looked quite enchanting as we drove through slumbering villages of thatched huts where little cowdung fires flickered, and snatches of conversation in the liltingly sweet Bhojpuri dialect floated in the air. Every now and then, we narrowly escaped head-on collisions with trucks along the narrow highway that has no dividers. Even at that late hour, there was plenty of other traffic on the unlit highway—pedestrians, cyclists, tractors; all carrying Chinese-made solar-light pen torches which cast hundreds of neon beams into the inky sky.

We reached Munger at midnight and checked into what was said to be the best hotel in town. The deluxe room—at Rs 600 a night—was a dingy, fetid-smelling cubbyhole, with soiled bedsheets, rock-hard pillows and a creaky air-conditioner. I was too tired to look elsewhere, and my eyes were just closing when I spotted a large rat perched on the window-sill. From the bed where I lay, the rodent had positioned itself at the same eye-level as mine. It looked straight at me, completely unfazed by the sudden burst of sounds and gestures that issued from me. A defence tactic that I’d seen many years earlier in a Hollywood film came to my rescue—I remembered a scene where a man in a wheelchair fights his would-be assassin by simply flashing a camera flashbulb into his eyes. I reached into the camera bag and aimed my powerful Nikon flash into the rodent’s eyes. The rat scurried away.

The next morning, I headed for the Bihar School of Yoga, which calls itself Yoga University. Founded in 1965 by Paramhamsa Satyananda, a disciple of yoga master Swami Shivananda, the BSY is housed in a charmless concrete building situated at a somewhat higher level than the rest of Munger. Once inside its big iron gate, you walk into a sprawling, well-maintained campus. The BSY had just concluded a mahayajna at its other centre at Rikhiapeeth, in neighbouring Deoghar, so all the big swamijis were away. The second-rung swamis, who showed me around, told me proudly that the Rikhia yajna was witnessed by thousands, including many foreigners. I see quite a few foreigners hanging around the BSY campus. A campus karamchari perkily tells me that "the goras come here to get their chakras rearranged". The swamis hand me a slickly produced booklet that was printed for the mahayajna, which begins with a quotation from Swami Satyananda Saraswati. The swamiji, clearly in tune with the times, has Gone Green, and now recommends yoga and mahayajnas as a cure for global warming. "Yajna is the cure, the remedy which all lovers of the environment have been searching for," he says, as he claims that they can rid us of greenhouse gases and toxic emissions. What of the hot air that emanates from such sermons, I wonder. 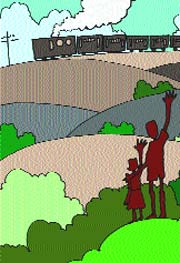 After hitting out at our consumerist society and the havoc multinational firms are wreaking on our ecosystem, the booklet urges us to go back to the old Vedic ways, and practise yoga and yajnas as the sure path not just to good health, but to begetting a son (what if I prefer a daughter, your holiness?) and increasing my "assets and properties". I read on to discover that we had cellphone-like communication capabilities a few thousand years ago, that we could address more than 10,000-strong gatherings without the aid of a microphone, we built a bridge over the sea that connected us to Sri Lanka...

I head out for chai at a tea-stall outside BSY. A busload of foreign disciples returns from the yajna at Rikhia and is immediately mobbed by the locals. The scene reminds me of the description Russian traveller Afanasy Nikitin wrote of India in 1468. "This is an Indian country. People have thick bellies.... They bring forth children every year and the children are many.... When I go out many people follow me, and stare at the white man."

I then go to check out the Sita Kund hot springs, 6 km from the town. According to legend, they were created when Sita bathed here to cool off after her agni-pariksha. I recall a charming 19th-century etching, showing British artists Thomas and William Daniells, having a picnic here in a forest grove. The water is indeed hot, coming up in bubbles from its rocky bed. Hindu pilgrims still congregate here in the month of Magh (January). But the forest grove is long gone—the Sita Kund is now surrounded by herds of pigs, happily rooting through garbage.

Still hoping to salvage something from this trip, I then head to Munger fort, situated on the banks of Ganga. It looks nothing like it did in those romantic Victorian lithographs. The whole place is squalid, and in sad disrepair. The palace of Shah Shuja is the last of the crumbling sites of this ancient fort that still retains its magnificence when seen from the outside. But I can’t go inside—it’s been turned into the district jail.