The Monsters At The Back

Mumbai is poised for a 2034 development roadmap. Planners are thrilled, ecologists are apprehensive. 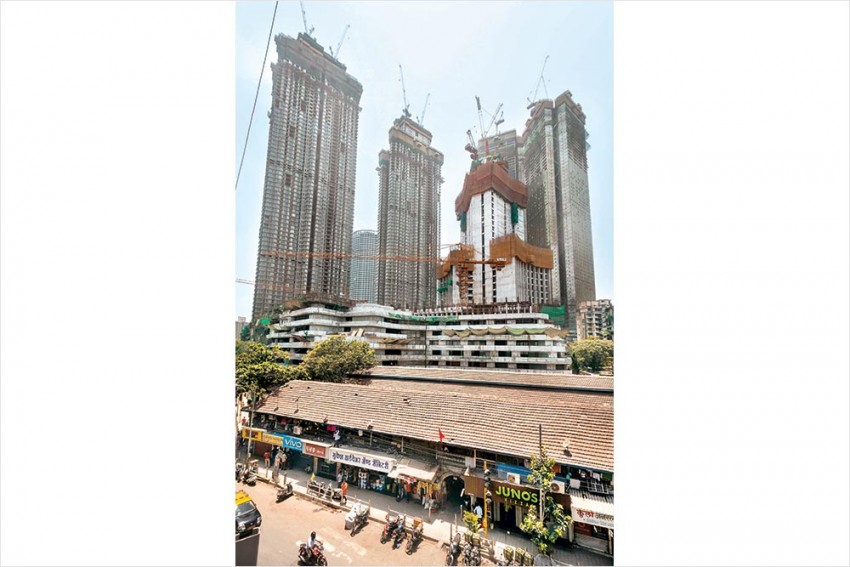 Old, New
High-rises come up beyond tile-roof businesses in Lower Parel
Photograph by Apoorva Salkade
Prachi Pinglay-Plumber May 03, 2018 00:00 IST The Monsters At The Back 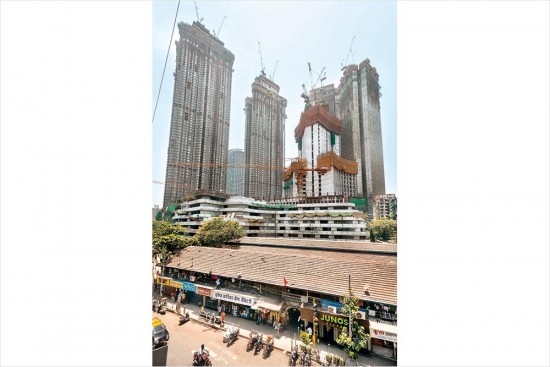 For all the vibrancy and glamour, Mumbai has a flip side: more than half of its population lives in slums. In the past two decades, it is the Slum Rehabilitation Auth­ority that has built close to 10 per cent of the city’s expected houses. The western metropolis has one of the worst per-capita open space ratios anywhere. Yet, more than one lakh of its fully constructed apartments have been lying quietly in the unsold inventory of the real estate ind­ustry that was thriving till not very long ago.

This, when Mumbai is the world’s second-most densely populated city, with a density as heavy as 31,000 people per sq km. Simultaneously, there is an unprece­dented slump in the real estate industry. Ironically, that is amid a governmental promise to build 20 lakh affordable houses by 2022 in Maharashtra.

So, why talk of all this now? Well, beca­use of a move now to entirely reorder a city already at its edge. The latest anno­uncement is DP 2034—a ‘development plan’ or blueprint on how to expand the metro in the next 16 years. It’s a plan that has been doing the rounds since 2009. A previous draft had attracted such strong criticism that it was scrapped in 2015. The present one was submitted in August last year and has now finally been approved by chief minister Devendra Fadnavis. 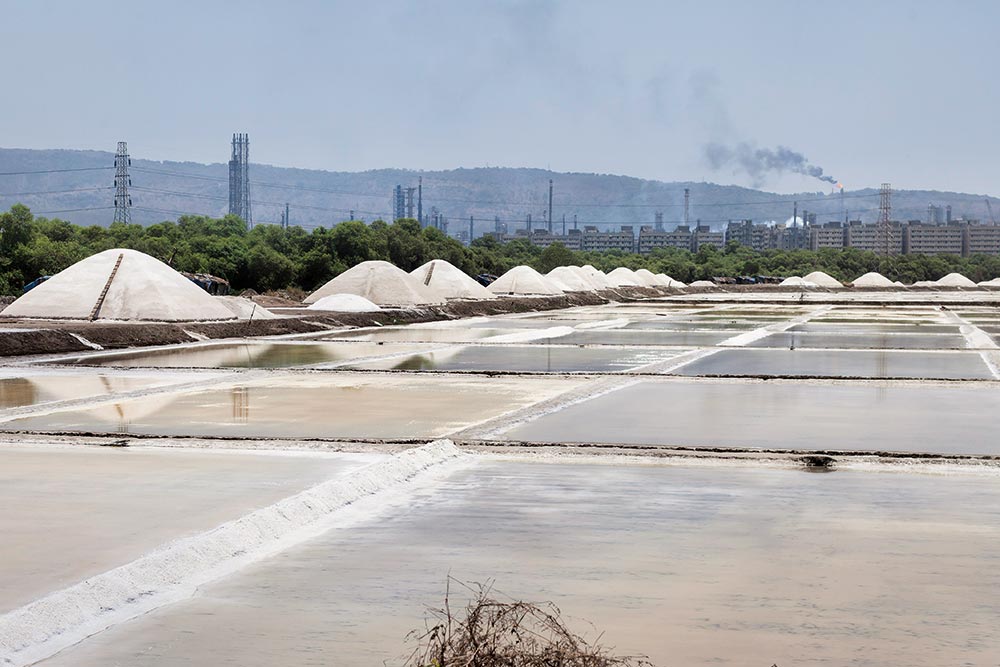 In a fortnight, the document can be acc­essed for pub­lic perusal, comments and suggestions. But already, information partly given out by the Brihanmumbai Municipal Corporation (BMC) commissi­oner Ajoy Mehta and urban development principal secretary Nitin Kareer is worrying urban planners and activists about the exact administrative intentions.

The crux of it is this: of the total 3,355 hectares of what has hitherto been notified as a ‘no-development zone’, as much as 2,100 ha will be made available for ‘aff­ordable housing’, Mehta told the media. “Another 330 hectares from salt pan lands will also be used for it. One million units in affordable housing will be created,” he said, adding the civic infrastructure will be “augmented simultaneously”. Apart from this land-parcel bonanza, the DP also provides for a doubled FSI (floor space index) of 3, up from 1.33, for residential construction in south Mumbai and 5 for commercial buildings. It has to be in proportion to the road-width, but the possibility of more than doubling construction in the city has set alarm bells ringing.

At present, Mumbai anyway resembles a mammoth construction site. The usual urban mess is there anyway—traffic jams and rising air pollution. On top of that, Metro rail lines are being laid to connect the north and south, besides other busy routes in a city that is already defined by its suburban train network. Not all are amused at the plans. “One has to look at the carrying capacity of an area before planning development of this kind. It is ridiculous to grant FSI like this or to build on salt pans,” says senior environmental activist Darryl D’monte. Adds Pankaj Joshi, director of Urban Design Research Institute (UDRI): “We all saw what happened to the concept of allotting one-third area each to open spaces, affordable housing and commercial use in the case of mill lands (in central Mumbai). From 200 acres, the area that came for public use was less than 60 acres.” The UDRI, along with some NGOs, had led a long campaign for citizens’ participation in getting suggestions and obj­ections for this DP.

The reaction from the industry is expe­ctedly positive. The DP-DCR 2034 presents a progressive outlook for conducting real estate business over the next 15 years, says Marathon Group managing director Mayur Shah, who heads the real estate developers’ body CREDAI MCHI. “It combines regulation with parameters of growth drawn out through empirical modelling that is bound to provide the requisite boosters to the market,” he notes. “It provides special powers to the BMC to decide modalities and procedures of approval from an EODB (ease of doing business) perspective. The FSI benefits have been extended to ongoing projects as well.” The industry has been in a slump that worsened after the 2016 demonetisation, the setting up of a Maharashtra Real Estate Regulatory Authority and enforcement of the GST in July last year amid an overall dip in economy.

And yet, if the industry has much of its ready-to-sell stock lying untouched by buyers, then how would building more houses trigger demand? Anuj Puri, chairman of Anarock Consultants, says Mumbai has its unsold stock at 1,15,400 units, ranking highest in the country. “Some may then question as to why we need to add more stock when there is plenty of old to be sold. Well, Mumbai builders need to cash in on the ‘affordability’ factor. The city needs hou­sing that is well within the buying limits of a majority of residents (Rs 15-20 lakh price bracket),” he says. But a whopping 67 per cent of Mumbai’s total unsold stock is priced over Rs 40 lakh. “Thus, the DP must cater to the Rs 15-20 lakh price bracket to address the housing shortage. More than 45 per cent Mumbaikars lives in slum areas. That has prom­pted the government to give major impetus to affordable housing, which will eventually push the realty market.”

The supply of affordable houses decr­eased last year with the MHADA (Maharashtra Housing and Area Development Authority) housing lottery clocking the lowest number of applications. Of the 819 units, only eight were for economically weaker sections and 192 for low-income group. It faced flak for also charging market rates for houses in high- and middle-income categories.

Although the track record of the past two decades indicates otherwise, most developers are now keen to build affordable housing. “If you try to sell Rolls Royce in a Maruti market, will it work?” says Rohit Podar, MD, Podar Housing and Development Ltd. “Their whole concept of this DP is to increase affordable housing. They have tried to make MHADA redevelopment easier by reducing consent from 70 per cent to 50 per cent, giving more power to the collector.... One FSI for the whole city makes it a level playing field.”

Of the 3,355 hectares of the no-development zone, 2,100 will be made available for housing. So will another 330 hectares from salt pan lands. But what exactly is ‘affordable’ in Mumbai?

Podar agrees that environmental studies should be done and the issues addressed. Act­ivists are worried these rarely happen. Recently, the citizens put up a formidable protest to save the ecology of Aarey Colony, a green lung, from being destroyed to make way for a Metro car shed. Several petitions about noise and air pollution are before the high court, not to mention the abysmal drainage during monsoons.  The official response: infrastructure will dev­elop simultaneously. Planner Sula­kshana Mahajan deplores construction on salt pan lands. “It will check rainwater percolation; lead to flooding,” she says.

Kareer has said that no open space deletion has been accepted and his office took only 1,966 of the 2,245 suggestions from citizens and exp­erts in the city, where 12,800 hectares have been classified as natural areas. Environmentalists demand a re-examin­ation of all places defined as open spaces, given dubious instances such as a recent bid to include Mahim Nature Park for construction (which was eventually withdrawn following protests).

Much of the veracity of official claims will be clear by mid-May. Yet, as UDRI’s Joshi notes, there is no arguing against the claim of creating 80 lakh jobs by way of buzzing construction activity—commercial units and ten lakh affo­rdable houses. Shah of CREDAI MCHI also bel­ieves the incr­ease in FSI for commercial dev­elopment to five will catalyse Mumbai’s commercial development.

Such a divide between what the realtors and urban planners feel about the impact of this DP ensures a prolonged debate even as the city desperately waits for res­p­ite from infrastructural shortcomings. It’s a month short of the monsoon. Last August, rains sunk many parts of the city for 24 hours. A month later, people died in a stampede at an overcrowded railway stat­ion. Three months later, a fire at a plush pub with ille­gal construction in the mill lands clai­med 14 lives. Each inst­ance a hint at how poorly Mumbai is run.

‘I’m Here As I Can Take Everyone Along’