The Model’s Feet Of Expat Clay 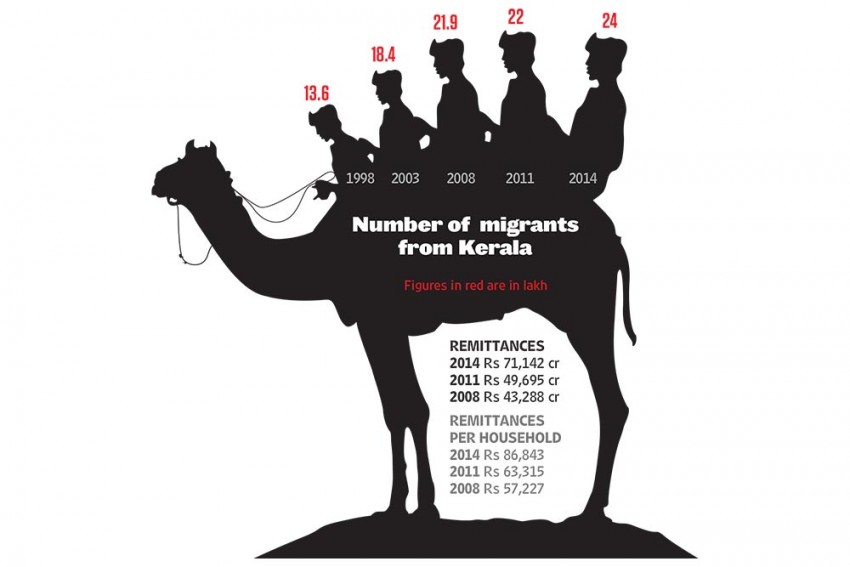 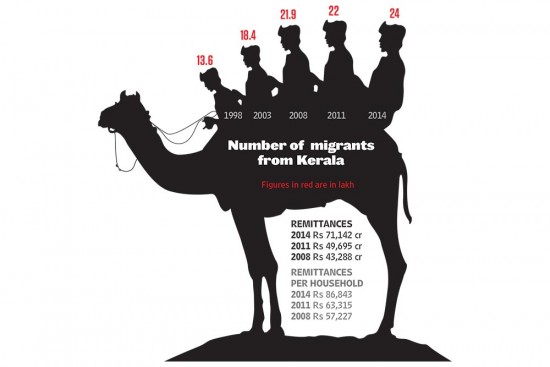 Demonetisation and the ensuing liquidity crunch have exacerbated Kerala’s economic woes. With fiscal deficit touching Rs 19,000 crore, every penny in the coffers counts. Recent drops in excise and tax collection add to the worries. On top of that, sustained slump in crude oil prices hovering around $45 per barrel, naturalisation (officially mandated preference in the Gulf countries for hiring natural citizens over foreigners), the Yemen war and West Asian turmoil have had far-reaching ramifications for Kerala, which has, for decades, been a major source of expatriate workers in those parts. As the Gulf dream turns into a nightmare with recession, war, layoffs and deportations, pushing more and more of the expats back to where they came from, remittan­ces—a ­major source of Kerala’s ­inc­ome—have been badly hit. Is this the beginning of the end of the much-­vaunted ‘Kerala model of development’?

Engagement with the desert kingdoms is more than a couple millennia old, but the current phase of migration began with the exploration of oil in the Gulf in the 1970s and, by the 1980s, Kerala was flush with shiny wealth. With jobs for huge numbers of the educated young not readily available in the state, more and more Malayalis landed in the Gulf, in their quest for the proverbial pot of gold at the end of the rainbow. The money the ‘Gulf Malayalis’ sent back home shaped Kerala’s behaviour, consumption pattern, even its architecture, while, with their relative excess of conspicuous wealth, they turned more and more into a class of their own.

S. Irudaya Rajan and K.C. Zachariah of the Thiruvananthapuram-based Centre for Development Studies (CDS) have been studying migration from Kerala since 1998, when the number of overseas migrants was 13.6 lakh. They saw it go up to 24 lakh by 2014. The CDS study shows remittances are a major source of development revenue, with the most crucial component being private ­transfers by individuals to their families in Kerala. “Ninety per cent of them are in the Gulf,” says Rajan. “The remittances are over Rs 70,000 crore—36 per cent of the state’s income, with one-third of the population benefiting directly. Another one-third—travel agents, construction companies, contractors, retailers of consumer durables, mobile shops, ­automobile retailers, jewellers, banks and so on—benefit indirectly. So, ­overall, two-thirds of Kerala’s population benefits from remittances.” No wonder the CDS 2000 study points out that migration and remittances contributed “more to poverty alleviation than any other factor, including agrarian reforms, trade union activities and social welfare legislation”.

The ongoing deceleration in the flow of remittances and the spurt in the number of ‘Gulf returnees’ bring back memories of another time when these had ­happened—the Gulf war in the early 1990s. “Also, 40,000-50,000 people returned during the global recession of 2008, and during the nitaqat (naturalisation) crisis in 2012, around 30,000 came back,” says Rajan. “This oil crisis is more serious and an increase in return migration is expected, leading to a decrease in remittances.”

There are reports that Malappuram district, home to the highest number of migrants, sees 10 to 20 people returning every day. Not just workers, even doctors and other professionals are feeling the heat of recession. Foreseeing dark days ahead for Kerala, Aam Aadmi Party state convenor C.R. Neelakandan warns that the government should be careful with its non-plan expenditure. “Even though the government did not have much money, society did not suffer because there was a steady flow of remittances,” he says. “Now, with the oil crisis, people have become careful and are afraid to spend. When spending is down, so is tax collection. The current liquidity crunch and the drastic dip in revenue will have a cumulative effect on Kerala’s economy.”

It is not helping that the plantation sector—both rubber and tea—is also in the doldrums. There is less spending by the rubber economy, comprising 1.4 lakh small holders. With the industrial investment low, there has been no job creation for decades. The CAG report in 2015 noted that “during 2010-2015, the inadequate growth rate of capital exp­enditure (26 per cent) and expenditure on loans and advances (negative growth) indicated the state government’s low priority towards development ­activities”. The share of agriculture in the Gross State Domestic Product, too, has fallen drastically over the years.

With no government so far managing to stem the flow of students going to other states for higher education, nearly three lakh students are currently studying outside the state even as Kerala continues to be high up in terms of human development indices. It still has the highest literacy rate among the states and was the first to achieve 100 per cent primary education. It also has the lowest infant mortality and maternal mortality rates, a life expectancy of 72 years and a zero rate of population growth. Now, the state may finally have to cut down on social-sector spending as the government is hard-pressed to find funds.

“This government is committed to enh­ancing public investments in order to boost economic activities and create opportunities for business and rehabilitation,” says economist K.N. Harilal. “There are a lot of activities in infrastructure development. There is also a new generation of business people and this will have an indirect positive imp­act on job-creation. There are more small-scale industries and less ­labour militancy, lockouts and strikes. IT, food-processing, Ayurveda, electronics, pharmaceuticals and tourism are areas that should seek investments. It is not as bleak as it is made out to be.”

Even though there are different takes on exactly how bad the conditions are, few would disgree that the government needs to be creative in order to pull the state out of the recessionary pit it is sliding into.

By Minu Ittyipe in Thiruvananthapuram

Keep An Ear Out For Whispers