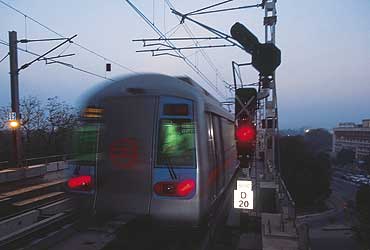 outlookindia.com
-0001-11-30T00:00:00+0553
When Elattuvalapil Sreedharan first suggested that 10 years was too long to start a metro rail in Delhi, people in government tended to incredulity. Even top international consultants scoffed at the 70-year-old engineer's optimism. After all, the Delhi Metro Rail Corporation (DMRC) had already lost over two years, remaining headless from when it was cleared in 1996 to the day Sreedharan was appointed MD in November 1998. Besides, for almost a year after his appointment, Sreedharan was putting finishing touches to what he still considers his magnum opus, the Konkan Railway.

But exactly four years after taking charge in a makeshift cabin with a table and a chair, Sreedharan is counting the days to December 24: when imported trains will roll on the first 8.3-km stretch of the 62-km, Rs 10,000-crore network that makes up Phase I. At the headquarters, the specially-devised digital clocks in all officers' rooms are now down to a single digit, weekly meetings have become a daily exercise, officers—especially the electrical engineers—work till 1 am, while at the six stations, others do the last detailing: laying out lawns, painting kerbs, training the 300 sahayaks who'll assist the commuters on one of the world's best metro systems. The four trains, especially designed and manufactured by a Japanese-Korean consortium, make endless practice runs while sahayaks go ceaselessly through the automated ticketing system or up and down the sari-proof escalators.

In the training school nearby, 100 cops, including policewomen, are learning the ropes of keeping the peace in a state-of-the-art metro, while securitymen from an international agency take up positions. Senior police officials promise high-level vigilance all along the route. Passengers will have to pass through metal detectors. "In addition to the women security personnel, we are planning to have cops inside the coaches for safety of women passengers and also from the terrorist threat point of view," says a senior official. Each coach has wireless systems by which passengers can communicate with the driver in emergency situations. The driver will in turn call up the operational control centre and alert the next station where a rescue team will take charge.

And barely a kilometre away from Tis Hazari, hardly disturbing the congested traffic milling past the site, construction is quietly under way already for the 4.5-km stretch to be launched by next September. At this rate, believes everyone at DMRC, the entire network, including 11 km of subways under central Delhi, will be ready well before the scheduled September 2005. With over two million riders expected to use the system daily, Sreedharan says, "It is the only solution for Delhi's traffic problems." Besides, it will reduce both Delhi's pollution levels and accidents. Experts point out that considering Delhi's population has reached 14 million, Delhi should have had a rapid transit network of over 100 km by now. All the more so because Delhi has around 4 million motor vehicles, more than Mumbai, Calcutta and Chennai put together and they account for nearly 65 per cent of Delhi's pollution.

R.M. Raina, a senior DMRC officer, goes even further: "The Metro will change Delhi's lifestyle. It is fast and clean, it will save Delhi from certain death." Delhi's metro—more advanced than Tokyo or New York, comparable with Singapore and Hong Kong—has turned into a model for other traffic-choked cities: queries are already trickling in from Mumbai and Bangalore.

But before Sreedharan was suddenly summoned by Delhi's Lt Governor on an October morning four years ago, the DMRC seemed destined to go the way of the 35 sets of plans made and forgotten in the last 50 years for a Delhi Metro. There were many good reasons to turn down the offer, not the least being putting his reputation on the line.But Sreedharan is the type who can't say no to a challenge, and invents one if none exists. At 32, for instance, deputed to rebuild the Pamban railway bridge at Rameshwaram within six months, he did it in six weeks, including fishing out 125 girders washed away in a tidal wave. But it wasn't just to make things more difficult for himself that he pruned down the Metro deadline by three years. "Another three years would have cost at least Rs 1,000 crore more," he explains.

There was only one condition Sreedharan imposed for accepting the Metro job: a free hand, with no interference in either appointments or finances. He believes it is the key to the Metro's success: "I kept the organisation very lean, it's more effective that way." Even now, DMRC has just 600 employees, all of them handpicked by Sreedharan. "Whenever I hire a new person, I look closely at his record for integrity. That is the litmus test." There are no peons or clerks at DMRC, instead they have all the inter-connectivity they need. The mild-mannered MD, who introduced yoga and meditation classes in his corporation, has a reputation for being very tough on dishonest employees. "A whiff of corruption can result in an overnight transfer," confides a senior official. He can be equally tough on contractors. Raina recalls one incident when girders were being manufactured. "It had been raining all night and the cement hadn't set properly. He asked the contractor to dismantle the girders, although it cost over Rs 1 crore. After that, the contractor took care to build a shed to protect the girders from rain."

The beauty of the whole construction process is that all the huge underground tunnels and towering rail track pillars have been built without inconveniencing Delhi's citizens. A great deal of planning and coordination between various agencies made this possible. All phone cables, sewerage lines, water pipes, even trees, were removed and transplanted much before construction began. So careful was the DMRC not to offend local sentiment, it even carted an idol from Jaipur worth Rs 5 lakh in lieu of one temple they dismantled. Traffic adjustments were planned ahead. The judiciary ensured that work progressed unhindered. "We faced over 200 cases, related mostly to land acquisitions. But in all cases, the courts refused to grant a stay," says a senior official. Also, crucial issues like undisrupted supply of electricity in a power-scarce Delhi were worked out much in advance.

As for political pressures, Sreedharan says, "I just ignore them. Politicians learn to leave you alone as long as you are delivering the goods." And the goods he delivers, according to Raina, is "top class engineering. Everything, from the prefabricated rings used for the tunnels, to the high-strength pillars and girders, is of a quality never seen in this country. The formwork came from France".

The reason why the Delhi Metro relied so heavily on foreign expertise and products, explains Sreedharan, is because of his own experience during the planning and design of the first Indian metro in Calcutta. "If there is one thing I learned back then, it is that we don't have the expertise to build a metro." The Calcutta Metro depended almost entirely on the Indian Railways for its technology. "The railway engineers," says Sreedharan, "competent though they are, did not know anything about building an underground, things like ventilation and signalling. We had to learn the hard way." That's why, he says, he insisted on getting foreign experts as consultants and sending our engineers abroad to study how the metros work in Hong Kong and Singapore. "Now that they have the exposure, there is nobody to beat our engineers. We can not only manage without foreign consultants for the second phase, we can send our engineers to build a metro anywhere in the world."

It's because of this passion to use the best technology that he still rues the day he lost the battle to introduce narrower standard gauge lines instead of the broad gauge lines the government insisted on. "I still think it was the wrong decision," he says. By sticking to broad gauge, he thinks India's isolated itself as far as metro technology's concerned. Apart from a few countries like Spain and Argentina, the rest of the world's metros, says Raina, are all on standard gauge and it'll be impossible to update the Delhi Metro later. It was the lowest point in his career. "In fact," confesses the spry technocrat who can still run up site ladders 100 metres high, "I wanted to quit that day." But quitting seemed too much like running away.

His next fight is to get the government to clear the second phase, which will extend the network by another 34 km, one line stretching from Central Secretariat to Vasant Kunj in the far south and another line from downtown Connaught Place all the way east to Dilshad Garden, carrying more than another million riders a day. "We need to go on expanding the system. In other countries they start planning five years ahead of the population growth. Already it's too late, any more delay will be terrible." His eyes light up as he sees the challenges ahead: "We won't have to depend on foreign loans this time. We can raise it internally, as we did for the Konkan Railways. What's Rs 10,000 crore for the government?" Indeed.

Saved from the beggar mafia, streetchildren get a new life in Kerala