Watch out, the film could lead you dead bored 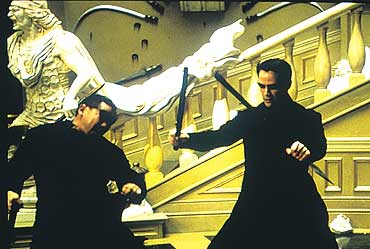 Here's a film that demands a ready-reckoner or else you'll never be able to fathom its strange images. I still don't know if I've fully understood the significance of what I saw or if there was anything worthwhile at all in this cinematic conundrum.

Clearly Matrix Reloaded is only for die-hard Matrix fans and dutifully carries forward the motifs of Part 1. So you know that human beings are mere toys in the hands of machines. Their sanctuary, called Zion, is in danger of being taken over by the robots. Reeves plays Neo, "The One" to deliver mankind with some help from a surly Morpheus (Fishburne) and a lithe Trinity (Moss) who also happens to be Neo's love interest. In Part 2, Neo has acquired a "Superman-like" ability to fly. And, of course, there's the villain, Agent (Weaving), who has the quirky capability of replicating himself—which snowballs into one hell of an eye-popping combat in which a single Neo, attired in sunglasses and a queer priest's habit, takes on the multiple Agents. Couldn't he have, logically, just flown away? But then, in giving logic its due, the film wouldn't have delivered its usp: explosive action.

Matrix II is yet another in-your-face display of a Hollywood sci-fi's characteristic technical wizardry. The fluid (in fact almost liquefied) leaps and choreographed Karate chops, a spectacular chase on the futuristic freeway, an electrifying fight atop a moving truck—the scale and ambition are absolutely magnificent. But the sfx bombardment can't hide a lack of sense and substance. The senate meeting, the mythological claptrap, the philosophising on free will, control and choice sound utterly giddy. In fact, if you were to rigorously deconstruct the Matrix text, you'll be left with sheer baloney. Matrix II also lacks humanity and warmth and makes for an alienating simulated ride. Despite the underlying sense of doom, Neo and Trinity's love remains incredibly inanimate. The only lively character is the man who loves to curse in French because "it feels like wiping your arse with silk". Watch out, the film could lead you dead bored. For sheer thrills, you could visit the nearest video games parlour.