The Many Merits In His Stars: Can Likely Pak PM Imran Khan Produce A Nuanced India Policy?

In his potential new role as helmsman of not just a playing eleven but all of Pakistan, is Imran Khan likely to unleash another hostile spell against India? Or will Imran the politician be different—marked by flexibility, pragmatism and amiabil­ity? 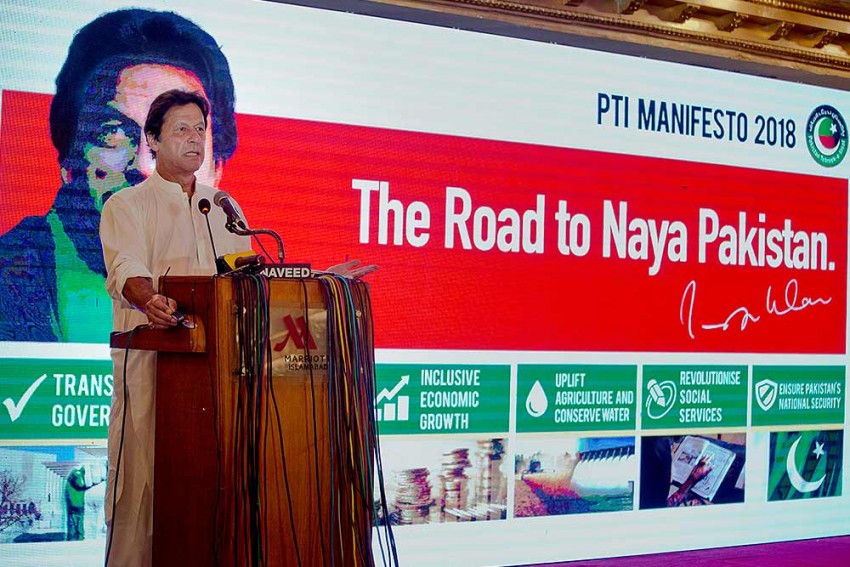 The Plan
Pakistan Tehreek-e-Insaf chief Imran Khan releases his party’s manifesto for the polls in Peshawar
Photograph by AP
Pranay Sharma July 19, 2018 00:00 IST The Many Merits In His Stars: Can Likely Pak PM Imran Khan Produce A Nuanced India Policy? 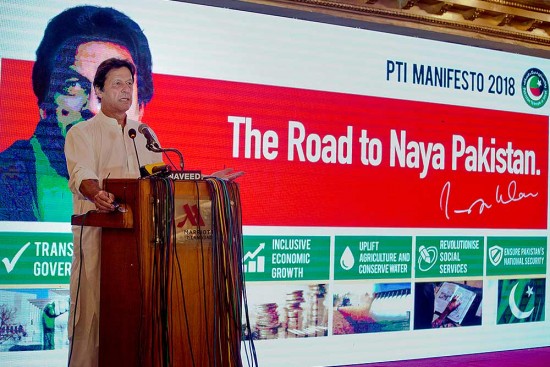 The possible emergence of Imran Khan as Pakistan’s new prime minister is being seen by India with genuine interest, and also a fair bit of scepticism—if not the outright alarm his cricketing avatar used to elicit. Back in the day, Imran’s swing, bounce and toe-crushing pace had tormented Indian batsmen. In his potential new role as helmsman of not just a playing eleven but all of Pakistan, is he likely to unleash another hostile spell against India? Or will Imran the politician be different—marked by flexibility, pragmatism and amiabil­ity? Will he want to smoke the peace pipe?

South Block mandarins are keeping a keen eye on how Pakistan’s July 25 election unfolds. Especially on whether Imran—in an author-backed role, so to speak—manages to upstage Nawaz Sharif, who finds himself playing against the odds. The wily Nawaz is meeting the challenge by scrambling the game with a new ‘victimhood’ card. And whether Imran succeeds or not depends on whether he can outdo Nawaz’s electoral pull—even in absentia, from prison.

The political drama seems to be obeying a specific, if tentative plotline that is generating a knowing smile in the Indian foreign policy establishment. Imran, they believe, has been propped up by the Pakistani army to cut to size its former protege, Nawaz. New Delhi,  therefore, expects Imran to do the bidding faithfully for the generals in the domain of security and foreign policy—especially in its dealings with India. Issues that are of concern to India—like terrorism emanating from Pakistani soil—may then be controlled through that familiar policy prism.

Neither India nor Kashmir has figured in any significant manner in the Pakistani election campaign. That is, of course, not counting the obligatory references to them in the election manifestos of major political parties, including Imran’s Pakistan Tehreek-e-Insaaf and Nawaz’s Pakistan Muslim League (Nawaz).

Read Also: Pakistan Is On Gradual Path To Democratisation 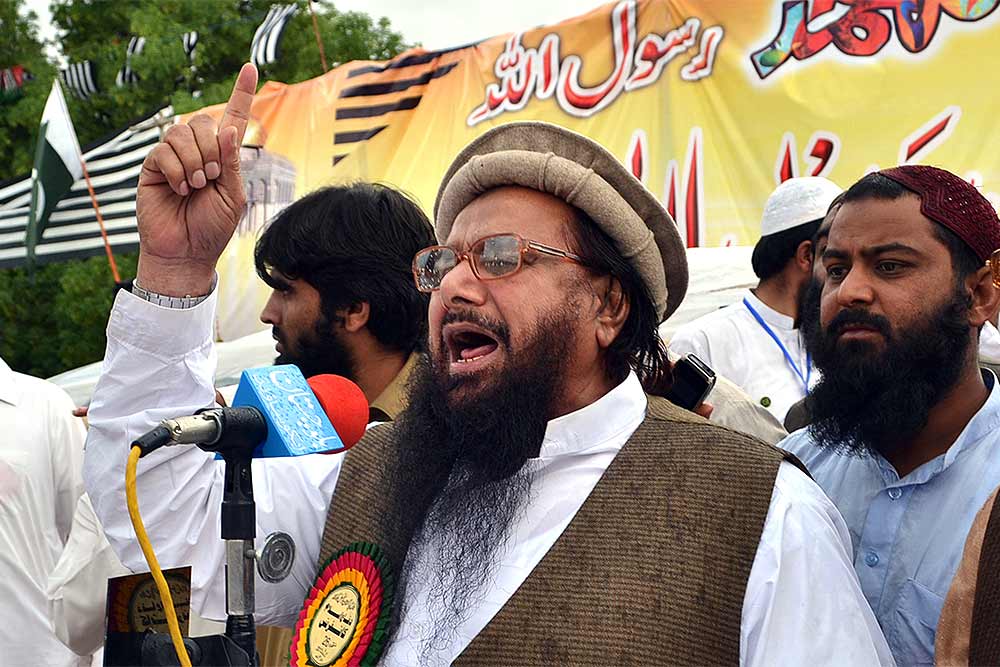 Imran On Hafiz Saeed and the Mumbai attacks

“Every Pakistani condemned 26/11. If you hang Hafiz Saeed without trial and due process of law, he will become a martyr.”

Imran’s position on Kashmir—that violence by Indian sec­urity forces be stopped and a resolution sought under the UN Security Council resolution—is a stated position of most Pakistani politicians. His references to India have also been directed more at his political rival, in a kind of rhetorical battle, than at India or its political leadership.

According to Imran, Nawaz’s decision to attend Indian PM Narendra Modi’s swearing-in ceremony and engage with New Delhi were moves governed mainly by a desire to safeguard his own business interests, not that of Pakistan. In short, it has been plain patriotism till now, with not much time spent on any larger vision. Whether the policy on India and Kashmir under a putative Imran government will be as strait-laced or show more range and innovativeness remains to be seen.

In an interview with Outlook, Imran had once insisted on cordial, cooperative relations between Pakistan and India—much on the lines of Canada and the US—and spoken of the dividends peace would bring. But that was 2012, and Imran was speaking more to the young urban elite who were his sole support base. Today, there’s a very strong possibility of his becoming the next PM and, therefore, his current views on India gather greater salience.

At one level, India is happy that the democratic tradition in Pakistan is being reinforced at least to this degree. This is the third transfer of power from one civilian government to ano­ther. The army, ruler of Pakistan for over 30 of the 71 years of its existence, has refrained from intervening through a mili­tary coup despite a political vacuum. “As the world’s largest dem­­ocracy, it’s natural that we’d be happy if there is democr­acy in our neighbourhood,” says a senior Indian diplomat.

But does this mean a civilian government that comes to power through a keenly contested election in Pakistan is free to take a decision on key issues of security and foreign policy?

Senior Indian officials answer this with an emphatic no. In these two realms of policy,  the terms and parameters of Pakistan’s engagement with India are dictated and app­roved by the army establishment. The “India threat” keeps the Pakistani army’s role in the country relevant and allows it to loom large over all other institutions, particularly the elected premier and his cabinet.

India could justly be a bit disappointed with Nawaz for his inability to deliver on the promises he made about normalising relations. But there seems to be some sympathy also for the ousted prime minister and the way he is being victimised by the army establishment.

In New Delhi’s assessment, Nawaz and his daughter are being punished by the army for his bold decision to move beyond the ‘red lines’ drawn by the military establishment in dealing with India. It was with some annoyance and even trepidation that the army looked upon a whole litany of moves Nawaz made: his decision to come to Delhi for Modi’s inaugural ceremony; the impromptu invite to host Modi in Lahore on his birthday; his open defiance in accepting that Pakistan’s international image was taking a beating due to its lack of action against the perpetrators of 26/11; and the terrorist organisations still thriving in Pakistan. And all this from an assertive, three-term premier who had also tried to put former army chief/president Pervez Musharraf on trial for treason. No wonder, the army espied a serious challenge to its traditional clout over the civilian government.

One may ask what made Nawaz, a leader who had been brought up and nurtured by the army like many of his predecessors, take on the generals? Some argue that it owes to an independent streak in Nawaz’s nature, while others say he has autocratic tendencies and seeks to dominate every individual and institution. Perhaps, in his third term as an elected PM, enj­oying huge support in the most politically significant province of Punjab, Nawaz fancied his chances of getting the better of the army. Insiders say he had known most of the senior generals from the time they were junior officers while he was the prime minister. This could have given him the confidence to go beyond the army’s comfort zone in his dealings with India.

By returning to Pakistan and courting arrest, Nawaz has perhaps taken one of the biggest political gambles of his life. He expects people to show their support by voting PML(N) candidates in large numbers. But in many constituencies, the PML(N) has been unable to put up candidates: many of its nominees rejected the party affiliation and are contesting polls under the ‘jeep’ symbol  (see Arifa Noor’s story headline).

How much political clout he still enjoys in Punjab will be ascertained if Imran’s PTI, despite all the hype and predictions of political pundits, fails to make a substantial gain that could propel him to the prime minister’s office.

India too is getting into election mode and the BJP-led coalition under Modi’s leadership will make all efforts to retain unquestioned supremacy in the 2019 parliamentary polls, and both Pakistan and Kashmir are important issues to face the electorate with.

MEA officials do not rule out the possibility of the new Pakistani PM reaching out to India. Though the leadership in New Delhi may not be averse to an engagement with the new reg­ime in Islamabad, it is highly unlikely that it will get into any substantive dialogue with Pakistan before the 2019 elections.

As of now, the most optimistic view is to hope for enga­gement between the two estranged neighbours. For a meaningful breakthrough in India-Pakistan relations, one would have to wait much longer than the change of guards the July-end elections are expected to bring in Pakistan.

Pakistan Is On Gradual Path To Democratisation