Fifty-five lions have died in Gir in the last two years. Strangely, the crisis arises from a leonine glut. 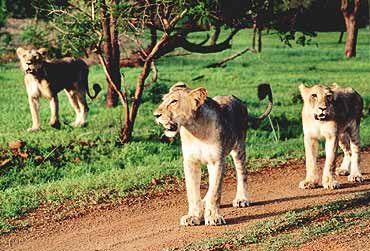 outlookindia.com
-0001-11-30T00:00:00+0553
On paper, all is well in Gujarat's Gir national park and sanctuary. The lion population is stable at about 320. The forest cover is thick, thanks to afforestation efforts. There has even been talk of shifting some of the animals to more sparsely populated forests. Yet, despite this comes the bad news: 55 lions have died in the last two years. And more may follow.

According to Sanat Chauhan, former principal chief conservator of forests, "many more lions are likely to die given that the 1,400 sq km forest is bursting at its seams and human encroachment is only adding to the pressure". Forest department officials are candid in admitting that the Gir forest which once covered 2,500 kms of area has over the years shrunk by over 1,000 sq km. This is compounded, as usual, by pastoralist claims on the territory: Gir now houses 20 settlements of maldharis or shepherds.

For the record, conservator of forests Bharat Pathak claims 44 of the deaths were natural. "Some accidents do happen, but that does not mean we are negligent. We rescued some 114 animals last year. We have also taken steps to prevent poaching." But wildlife experts say this is only one side of the story.

With growing human habitation, accidents have been all too frequent for comfort. A lioness died recently when she strayed into a farm bordering the jungle and was electrocuted. There have even been cases of animals being run over by trains on the 12-km railway track that runs through the sanctuary. Though there are speed restrictions and points where trains have to come to a halt, these are never complied with. Points out Bhushan Pandiya, a wildlife photographer who knows Gir like the back of his hand: "This is perhaps the only forest in India where a railway line passes through a protected area." Following protests from wildlife activists, the railways have now stopped running night trains through the sanctuary.

There have also been 'man-made' cases, like when poisoning—intentional or otherwise—has been responsible. A few lions have died after feeding on poisoned meat. In one case in Dhari, a lioness died after consuming a dead buffalo—which had been sprayed with insecticide.

Wildlife experts are unanimous that even though all looks well on the surface at Gir, it faces the same myriad problems other sanctuaries are plagued with. "It is one of our better managed sanctuaries but the pressure on forest space is increasing by the day. Mining activity goes on at the edge of the forests with hundreds of trucks driving past everyday. The surrounding buffer foliage has vanished with increasing human habitation and cultivation," Pathak says.

But it isn't just accidents that cause death. According to forest department officials, with the lion population over 300 and each lion needing a range close to 60 sq km, there is simply no space. Says Chauhan: "According to my calculations, Gir has the capacity to support only 200 lions. The animals are terribly cramped." Conservator of forests Pathak admits territorial conflict is an important issue that needs to be tackled if more fatalities are to be avoided. Many deaths happen here due to lions fighting each other for space. But there is very little the forest department can do to increase the actual area of the forest.

The attempts at improving forest cover have also not helped the lion population. Such efforts may have made the sanctuary "more dense" but for the lions it's just lowered comfort levels. Points out Chauhan: "Unlike tigers, lions like open country, savannah kind of forests with large open spaces. In fact, the need is to thin the forest to make the king of beasts comfortable." Forest officials even concede privately that the Gir lions now need a second home.

Chief conservator of forests Pradip Khanna also points out that there has been an increase in the "carnivore load" on the sanctuary. He says: "There has been a rise in the leopard population, which at present is over 250 against around 327 lions. This is also a source of concern for us." According to him, this is one of the main reasons lions have been straying out of the forest.

But any suggestion of moving the lions from Gir meets with stiff resistance from politicians. According to a forest official, many see the Asiatic lion in the Gir forests as a 'pride of Gujarat'. "No one wants to see the animals shifted to a sanctuary in, say, Madhya Pradesh."

So, for the forest officials, it's a daily case of battling a problem of plenty. As lions jostle with other lions for space, plans to take them to a more spacious environment seems to have been shelved. Says Khanna: "There are no immediate plans to shift the lions. We are taking good care of them."

That may be true, but does it augur well for the king of the jungle?