The Man Who Conquered Time

His genius is overwhelming, but the mathematician himself is completely at ease 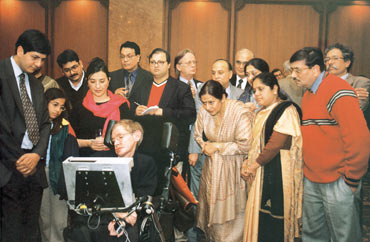 Yet she, and the capital's glitterati—authors, bureaucrats, editors, scientists, socialites—waited patiently at Delhi's Taj Mansingh to meet the man in the wheelchair who speaks through a machine.

Why had this lot come? For most part, awe, admiration. "Did you read the interview in which he said that getting als was the best thing that happened to him?" asked the public relations person. "Amazing, how this man has so completely overcome his disability. I think suffering makes one more focused. One needs suffering to grow." Yes, there was admiration, awe, but also overriding curiosity. How does the speech synthesiser work? Does his head always lean to one side? How can this extraordinary brain, trapped in an unresponsive body, function?

Once asked how he felt about being labelled the world's smartest person, Hawking dismissed it as mere media hype. "They just want a hero, and I fill the role model of a disabled genius. At least I am disabled, but I am no genius."

For the past few days, the Lucasian Professor of Mathematics has been front-page news. Every little thing that Hawking did was reported—his meal at Maurya's Dum Pukht, his visit to Jantar Mantar, the fact that he wouldn't be visiting the Taj Mahal... "People are so bored with politicians, they want something different, something new," said an editor.

"Have you read A Brief History of Time?" asked a bureaucrat. I looked the other way, and so, I noticed did everybody else. Translated into 33 languages, the book had sold nine million copies. No, meeting the author seemed a much more attractive proposition. A philosopher-politician commented: "Imagine. All that creativity trapped in this body. This is karma."

Quite suddenly conversation stopped. He had arrived. Dressed in a dark suit, head characteristically tilted to one side, wasted form seemingly moulded into the wheelchair, lifeless feet dangling at the footboard. The laptop was fixed to an arm of the wheelchair. Everybody—some politely, others more obviously—looked at the furiously active screen and tried hard to decipher what was on it. Hawking had lost his vocal chords in an operation to assist his breathing and communicates through a speech synthesiser. Selecting words from a menu, he punches in what he wants to say, managing 15 words a minute. "This synthesiser is by far the best I have heard, because it varies the intonation, and doesn't speak like a Dalek. One's voice is very important," he once wrote. "If you have a slurred voice, people are likely to treat you as mentally deficient. The only trouble is that it gives me an American accent!"

The wheelchair stopped. People froze just where they were, unable to decide what to do. This wasn't the usual celebrity; he could not go up to a podium, shaking hands was out. A pleasant-looking woman stepped forward. She was from an ngo and had brought him a bunch of roses. Gradually, others came around. More flowers, polite greetings. Photographers rushed around trying to capture the best angles. Someone with a handycam came forward. "Sorry, this is a private party. Please go away," said one of the hosts.

But the man himself was completely at ease. Yes, his frail, wasted form spelt vulnerability but there was also something decidedly 'normal'. Though there was hardly any movement, save of the hand, one could sense the devastatingly alert mind, detect a touch of humour. Two marriages, three children and a fulsome response to life, this was the man who bet on a subscription to Penthouse and Private Eye.

"A glass of wine for the professor," someone suggested. The wine was brought and the nurse went into action. The keypad was placed in the other hand; a plastic bib went round his neck. The glass was brought to his lips. He took several sips, spilling more than he imbibed. The wine flowed down the bib and gathered in a wide pocket at the bottom. Neither the nurse (he has several) nor wife Elaine (his second—he'd divorced his first, after a marriage of two decades) seemed embarrassed. I tapped the nurse's shoulder. "I have a question," I said. Looking straight at me, she said "Ask him."

Him? How? I framed my question slowly. "I am a Buddhist," I said, "and find great similarity between the theories you talk about and the Buddhist belief that a law (not a god) links all matter." He started working furiously at the computer. One menu followed another, the cursor moved back, forth, sideways, lengthways. Had he heard what I said? Had he understood? It seemed like forever; I was awkwardly stooped not knowing whether to go away or to wait. Quite suddenly a voice said, "Yes, but it's not the only way."

And then he looked up, and gave me a disarmingly boyish smile.