The Mahabharata In 100-Odd Murals 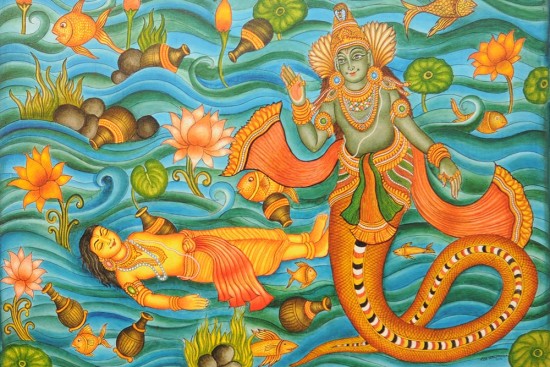 The 8-ft-by-4-ft depiction of ‘Vishwaroopam’ literally dwa­rfs Prince Thonnakkal’s slight frame. It is the only painting this master has pain­ted out of the 113 frames of ­murals through which the Mahabharata ­unfolds in bright colours and int­ricate patterns. He left it to his 35 woman students to bring the rest of the epic to life.

“It is only appropriate that Prince Sir came up with the Vishwaroopam,” says Meena Kumari, a retired postal emp­loyee and former Kerala state footballer from Thiruvananthapuram, who has been a student of Thonnakkal since 2000. “Just as the god’s cosmic form inspired Arjuna on the battlefield, our master has been the inspiration behind this massive project. We owe the revival of mural art in south India to him.”