The Lusitanian In Hind

Francisco Luis Gomes, Goan polymath, was one of our earliest patriots. He can’t lie forgotten. 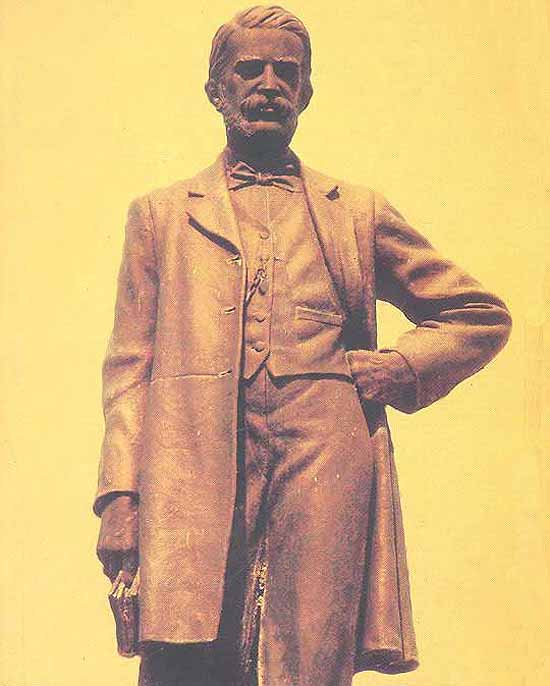 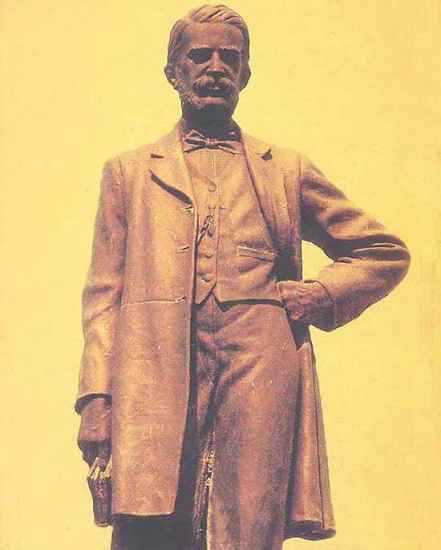 “I was born in India, cradle of poetry, philosophy and history, today its tomb,” wrote the young Indian. “I belong to that race which wrote the Mahabharata and invented Chess—two conceptions that bear in them the eternal and the infinite.” Yes, his homeland’s weakness had allowed it to be ruled by colonial powers—“India is imprisoned”—but the young visionary believed in its resurgence: “I pray for India, liberty and light.”

Given that these sentences were written in 1861, it would be natural enough to assume that their author was a Bengali Hindu, writing either in Calcutta or in London. In fact, it was a young Goan Catholic in Lisbon who composed these stirring phrases. The Goan, Francisco Luis Gomes, also published a novel in Portuguese, Os Brahmanes (The Brahmins), that can claim to be one of the earliest Indian novels. Many Goans regard Gomes, who died in 1869, as their land’s greatest son—a homegrown version of Vivekananda, Tilak and Gokhale. Not only have most Indians not heard about Gomes, but many would find it jarring to think of a Goan Catholic who wrote in Portuguese as a nationalist. This speaks more about the narrowness of our present conception of Indianness than about the patriotism of 19th century Goans. Under the familiar sights of Goa—which exists in the contemporary Indian imagination only as a landscape of fun—lies an unexpected literary treasure: the neglected works of pioneering Indian thinkers, most of them Catholic, many of them writing in Portuguese. Of these, Gomes is perhaps the most important.

The brutal start of Portuguese rule in Goa in 1510 resulted in two unexpected boons for modern India. Forced to flee their homeland in order to protect their faith, the Saraswat Brahmins spread throughout the Konkan and Malabar, fertilising commerce and culture everywhere they went. (The Saraswat diaspora is described in  Kannada writer Gopalakrishna Pai’s historical novel, Swapna Saraswata, which is being translated into English.)

That few Indians know of Gomes speaks more about the the narrowness of our conception of Indianness.

The other boon was the development, in places like Margao and Panjim, of an educated indigenous Catholic community, at first subservient to white rulers, but soon capable of dreaming of full equality—and even of freedom. In 1787, a group of Goan priests resentful at seeing whites climb over them in the church hierarchy met with sympathisers to plot the overthrow of the Portuguese. They even sent emissaries to Tipu Sultan for help. This, the ‘Pinto revolt’, was perhaps India’s earliest organised anti-colonial conspiracy, and it ended in true Indian style—at the last minute, someone betrayed the conspirators. One of the revolt’s leaders was said to be a Goan priest named Abbe Faria, who, a few years later, became a celebrity in Paris, where he practised hypnotism on French ladies, dabbled in revolution, was imprisoned in the infamous Chateau d’If, and inspired the figure of the charismatic Abbe in Alexandre Dumas’s The Count of Monte Cristo.

Of course, no career like this was possible for a Goan in Goa. In 1835, a liberal government in Lisbon sent a man named Bernardo Peres da Silva to Panjim—as his portrait in the gallery in old Goa notes, da Silva “was a native of India”. The first Indian to rule colonial Goa, he was also the last. Seventeen days into his reign, the white and mixed-race officers who controlled the Goan army put da Silva on a ship and told him to leave. After that they butchered his supporters. From then until liberation in 1961, although native Catholics rose high in the judiciary and clergy (and some Hindus became fabulously rich), no Goan again ruled Goa.

This was the world into which Gomes was born in 1829, where talented native Catholics, often fluent in Konkani, Portuguese and French, were still doomed to a second-class existence. Gomes, however, wasn’t simply tale­nted: he was a prodigy. By his early twenties, he had passed his medical examination and was serving as an army surgeon; later he went to Bombay to study Sanskrit and the Indian epics; barely 30 years old, he was elected to the Cortes—the Portuguese parliament—from the southern talukas of Goa. (Unlike Britain, Portugal gave its colonies the right of representation.)

The young man’s first day in parliament was a rough one: he heard another member demand that the government rescind the right given to colonial savages to sit in a civilised parliament. The member from Goa, in his maiden speech, counter-attacked. Savages? “In India,” he informed the carnivorous Europeans, “there are no banquets of human flesh; on the contrary, there are sects whose hands are innocent of all blood; who abstain from a diet of meat; who show compassion towards animals.” His parliamentary eloquence won him admirers in Lisbon; Gomes met John Stuart Mill and corresponded with French novelist Alphonse de Lamartine, wrote a treatise (in French) on economic theory, and in 1866 completed a novel in Portuguese—Os Brahmanes. Set in Fyzapur, a town in Avadh, on the event of the 1857 upheaval, its main characters are Magnod, a Brahmin domestic servant, and his Irish master, Robert Davis. Though the civilisation from which Magnod comes is ancient and rich—the novel explains the Mahabharata and the Hit­o­­padesha in some detail for its European readers—he is a decadent example of it, obs­essed with caste purity: “Bli­nded by fanaticism, he denied to the Pariah and the Sudra the sympathy which he held out to irrational creatures.” His white mas­ter is another kind of Brahmin—one obsessed with skin colour: “Robert seldom spoke to him in English, and very often taunted him with the epithet for gentleman of colour.” The clash between these two fanatics is inevitable, and the revolt erupts as the novel ends. Gomes urges his European readers, familiar with horror stories like the Black Hole of Calcutta of 1756, to take a balanced view of 1857: “Impartial men, who care for liberty and not for races, desire India for India and detest all despots, be they called Nawabs or Clives.” 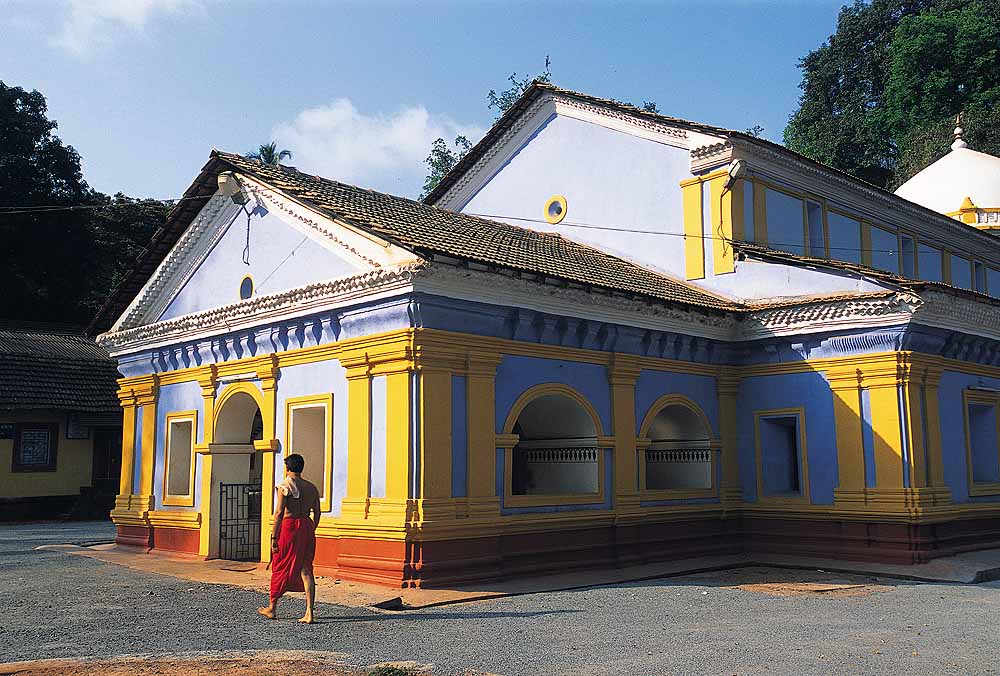 Gomes’s gifts inclined to the essay and oration. Parts of the novel read like Ori­entalist escapism, as Magnod turns into a thuggee, and Robert’s relatives become embroiled in a romantic subplot. It is when he digresses from the narrative to editorialise on India—and the world—that Gomes dazzles. “It is said that the law of Christ governs European civilisation,” he writes. “It is a lie—Europe tra­m­ples upon Asia and America, and all tra­mple upon poor Africa—the Black races of Africa are the pariahs of the Bra­hmans of Europe and America.” What is the way out of darkness, then? Viv­ekananda saw education and the renaissance of Hinduism as the answer. Gomes, who believed Hinduism was spent, pointed to education and Christianity.

Gomes, who felt Hinduism was spent, saw education and Christianity as a way out of the darkness engulfing India.

Being a Portuguese citizen, some observers conclude, was integral to Gomes’s identity—he not only served three terms in the Cortes from 1860 to 1869, but also wrote a biography of the liberal Portuguese prime minister, the Marquis of Pombal. But this fact makes him no less Indian than a nationalist like Dadabhai Naoroji, who was elected to the House of Commons. In Goa, Gomes was always seen as one of their own: people still remember how he made a statement by wearing a dhoti to a reception in his honour that was attended by the governor and other white grandees. In 1869, receiving news that their beloved son was returning, Goans gathered in Bombay—to find that his ship had come back empty. The homesick Gomes had died on the way of tuberculosis, and was buried at sea, barely 40 years old.

His liberal and nationalist temperament lived on in Goan intellectuals like the poet Armando Menezes, who tra­nslated Gomes’s Portuguese works into English, and later, while at Dha­rwad University, also translated medieval Kan­nada vacana poetry. Whether it was writers like Dom Moraes, or painters like Ant­onio Xavier Trindade and Ang­­elo de Fon­seca, or the musicians who worked in Bombay’s film industry, Goans have always been expanding our sense of what an Indian can look like, dress like, sound like—and be. Less well known, as the Margao-based journalist Valmiki Faleiro points out, is that tiny Goa may have contributed, proportionately, more officers to the Indian armed services from 1947 to 1980 than any other region. Most of these men were Catholic.

Konkani, now Goa’s official language, was one of Gomes’s mother tongues. But was so was Portuguese. Can the language of the Inquisition—the language of the men who persecuted Goa’s Hindus and Muslims in the 16th century—be called an Indian language? The issue has cropped up in recent years as Catholics, aware that their presence in Goa is diminishing (they now make up only a quarter of the population), seek to protect their heritage. A few years ago, a festival of Lusitanian-Indian culture was mocked by Hindu nationalists as a glorification of colonial rule. To Goan Catholics, this is a bitter irony: their pat­riotism is being questioned by Indians who speak English, follow every ball of the Ashes and spend their nights reading the Guardian blog. In the early 1980s, a grand statue of Camoes, author of the Portuguese epic poem The Lusiads, was removed from the square in old Goa, and consigned to a dingy museum. The Lus­iads does celebrate Portugal’s imperial expansion—but it also shaped the langu­age in which Gomes and his peers would assert India’s right to self-respect. By dispatching the statue of Camoes from our sight, we are also choosing to ignore one of the most brilliant pieces in the mosaic of the modern Indian identity.