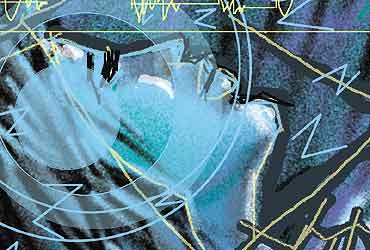 outlookindia.com
-0001-11-30T00:00:00+0553
Move over, heart disease and diabetes. Wake up to a stealthy new lifestyle killer—and the best-kept secret in public health. Doctors estimate that as much as one-third of India’s adult population is at risk from faulty judgement and poor concentration at work, at home and behind the wheel. And all because they don’t sleep properly.

Insomnia is the most well-known problem, but others, like obstructive sleep apnoea (OSA) and narcolepsy, which too can be life-threatening, are coming to light, thanks to a new breed of clinicians who practice sleep medicine. The good news is that most sleep disorders are entirely treatable. The bad news: most of us, including doctors, are unaware such problems even exist.

It’s chilling to think of the impact of sleep deprivation on people in whose hands we routinely place our lives—pilots, doctors, air traffic controllers, drivers or policemen. In fact, industrial catastrophes like Bhopal and Chernobyl have happened because of errors on part of their sleep-deprived staff.

Why have we come to this? As a society, we are constantly trying to pack more into each day. The only way we do this is by cheating on sleep. "Going sleepless for a day could affect your performance as much as a blood alcohol level above the legal limit," says Dr Partha P. Bose, medical superintendent at Delhi’s Orthonova Hospital. Yet, too many of us don’t know this—or don’t care—and stay hot-wired into our 24/7 globalised worlds, obeying the excruciating lifestyle demands this makes.

Like Mumbai animator Meghna Shah, 25, who fought to sleep at night because her eyes felt heavy and watery. Her doctor said she spent too many hours at her workstation and prescribed an eye mask. Today she can’t sleep without one.

More and more of us are getting less and less of the approximately eight hours of sleep that most experts say humans need for a normal life. Dr Ajit Vigg, of the Hyderabad-based Institute of Sleep Medicine, estimates that urban Indians now sleep under six hours a day because of changed lifestyles. Collectively, we’re running up a "sleep debt" that we can never hope to bridge.

People with such debts would end up at psychiatrists’ clinics or were simply dismissed as lazy Rip Van Winkles, never realising they had largely treatable disorders.

Take snoring, an affliction so common that it is entirely unremarkable. Yet ‘snoring is sound sleep’ is worse than just a bad pun. Most heavy snorers get very little good sleep.

Ram Chander Dhankhar, 50, a bank manager in Sonepat, Haryana, has frequently dozed off while signing cheques to the bemusement of clients and co-workers. "I snore and wake up after choking several times each night, so I feel tired during the day," he explains. Doctors at Delhi’s Indraprastha Apollo Hospital say he has acute OSA, the commonest type of primary sleep disorder, and sometimes stops breathing completely for a whole minute.

According to Dr Ravi Ramalingam, who runs the kkr ent Hospital and Research Institute, Chennai, about 45 per cent of men between 45 and 55 snore. A fellow-sleeper might be relieved when a person stops snoring, but that’s when apnoeaic death occurs.

Just how big is the problem? Dr M.S. Kanwar, who started north India’s first sleep lab at Apollo Hospitals, Delhi, in 1995, reckons that in the absence of a good nationwide sleep study, it’s tricky to guess, but, as he says, "There are way too many people with such disorders who aren’t even aware of their condition; the actual number could be much higher than we know."

However, most experts agree that about one-third of the adult population regularly fails to get a good night’s sleep. This gels with more detailed studies in the US, which show that nearly 40 per cent of the teen and adult population suffers from some form of insomnia or the other.

Mumbai-based Dr Zarir Udwadia’s sleep research over the past two years indicates that not only are we a sleep-deprived nation, we also seem to have one of the highest incidences of OSA. One analysis of the sleep patterns of 250 middle-aged men at the Hinduja Hospital revealed that 7.5 per cent had OSA, as opposed to 4 per cent of US men and 2 per cent of the women.

OSA is a common and serious primary disorder. If you are obese, snore loudly, gasp for breath during sleep, are forgetful, drink a lot of alcohol or have morning headaches, you may be at risk.

Typically, the throat closes in and obstructs breathing during sleep. Several factors can contribute: fatty tissue in the throat area, enlarged tonsils and adenoids, hypothyroid trouble, an unusually long uvula (the fleshy lobe at the back of your mouth) or a large tongue. OSA leads to high blood pressure, heart disease and strokes and is a typical higher-income lifestyle affliction.

Dr R. Narasimhan, a pulmonologist with Apollo Hospitals in Chennai, says most cases of death during sleep are because of apnoea: "When snoring stops, breathing stops. The pulse rate fluctuates, the heartbeat is affected and the body is under great stress. There’s a possibility of stroke. Still, in most cases, the brain (to which oxygen supply is affected) alerts the body to start breathing—and the person starts snoring again."

He worries that most people, even doctors, simply don’t recognise the symptoms and act. For 15 years, Delhi’s Anil Gupta showed classic apnoeaic symptoms and only had a pointless nose surgery to show for it. Though he is now on sleep treatment, the avoidable delay may have affected his heart and lungs.

And children aren’t immune. The extreme manifestation is SIDS (Sudden Infant Death Syndrome) where a baby turns blue and dies in its sleep. Says Dr George D’Souza, head of the chest diseases department at St John’s Hospital, Bangalore: "I have seen children with sleep apnoea caused by large tonsils and pulmonary arterial hypertension."

OSA is twice as likely to hit men as compared to women, though post-menopausal hormonal changes equalise the risk level.

Women in general are more prone to insomnia, according to Apollo’s Kanwar, who says they tend to bottle up their problems much more. People with insomnia have trouble falling asleep and lie awake worrying about not being able to sleep. When they do manage to doze off, they wake up often at night and have trouble going back to sleep. Sometimes they wake up too early in the morning. During the day they feel perpetually sleepy and tired and struggle to concentrate.

Insomnia is a secondary sleep disorder caused by stress, acidity, aches and discomfort from other diseases. One estimate says 15 million Indians suffer from chronic insomnia. Though even the young are at risk, its incidence tends to increase with age and affects about 40 per cent of women and 30 per cent of men.

Says Bharathy Visweswaran, a Chennai-based psychiatrist: "Any disturbance in the mind results in sleep disturbance. Ninety per cent of psychiatric disorders result in insomnia. Actually, insomnia is a symptom; the real problems are anxiety, depression, schizophrenia or mania. Among the middle-aged, insomnia is mostly related to familial, marital and sexual problems."

Narcolepsy or excessive sleepiness is a chronic sleep disorder with no known cause, though some studies suggested that it may be inherited. It affects the body’s central nervous system, causing messages about when to sleep and when to be awake to get mixed up. Victims fall asleep when they do not want to. The desire to sleep can be overwhelming and sometimes attacks with no warning at all. It can happen several times a day. St John’s D’Souza saw a case of a labourer falling off his cycle while riding to work and a high-profile lawyer who would fall asleep in the court room, for instance.

Dr Devinder Batra, 41, a surgeon from Panipat who is being treated at Apollo, suffers acute embarrassment when he falls asleep while writing out prescriptions at his clinic. "Fortunately, the problem is not that acute and I have managed to stay up during my operations," he says. But other narcoleptics have been less lucky and have caused fatal accidents.

There are several other, less common, sleep-related problems, like a range of parasomnias (abnormal behavioural patterns during sleep) such as restless leg syndrome (thrashing legs during sleep), night terrors, nightmares and sleep walking. Most are caused by psychological factors. However, even though many children experience parasomnias, according to Dr Amit Sen, Delhi-based child and adolescent psychiatrist, they rarely last beyond the age of 10.

What kind of treatment is available for different sleep disorders in India? Narcolepsy has no known cure, alas. However, as Ramalingam says, medication and lifestyle changes can more or less help control the symptoms: "Extreme daytime sleepiness can be treated with stimulant drugs and short naps help get over sleep attacks."

Happily, other sleep disorders can be treated once they are identified, which can be done only at a sleep lab. There are about 30 known sleep labs in the country. They can conduct a sleep study (polysomnography), an overnight test that measures how the body’s activity changes during sleep. Tests typically cost in the Rs 7,000-12,000 range and the results can suggest a course of treatment.

Medication for OSA rarely extends beyond nasal drops, but patients can respond well to other treatment.


Mild or short-term insomnia can simply be cured by practising good sleep habits (see box). But as Orthonova’s Bose explains, if your insomnia makes it hard to function during the day because you are sleepy and tired, sleeping pills can help, though they tend to become less and less effective in the long run. "Chronic insomnia must be dealt with by first treating the underlying conditions. If it fails, try behavioural therapy," he suggests.

Traditional remedies for poor sleep have varied between the humdrum (eating lettuce), the precious (wearing opal) and the surreal (nightly foot massages with a paste of marijuana in goat’s milk). It may only be a small beginning, but our understanding of sleep disorders and their causes has evolved considerably in recent years. It’s an awareness that will hopefully let millions of victims bid their disease good night.

One Man And His Party