The Lord Of The Rings: The Two Towers

Sit back and enjoy the captivating ride. 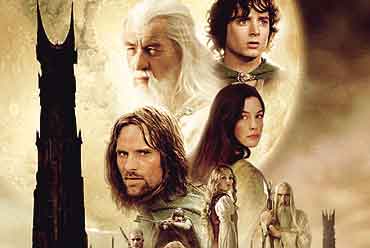 Rarely do great literary works find great film directors to interpret them on screen, but Peter Jackson's splendid films (two down, one to go, and I can hardly wait for the third one) will turn anyone into a Middle-earth cultist. The magnificent and often terrifying visuals that seamlessly blend grand landscapes with extraordinary computer imagery capture the epic sweep of J R R Tolkien's dream world, yet never sacrifice characterisation. Indeed, Jackson layers in his own nuances into the characters: the affectionate jibing between Gimli the dwarf and Legolas the elf, Faramir's craving for the Ring, Theoden's indecisiveness. Tolkien had not written these angles, but he would have approved; in each case, his creation becomes richer and more complex.

For the record, Two Towers continues the quest of the Fellowship, now split into three groups, to destroy the Ring and vanquish the Dark Lord Sauron. While Sauron has assembled the greatest army ever seen, the forces of good are now led by Gandalf the White, a far more powerful avatar of the original Gandalf the Grey. With him are Aragorn, seeking his kingly destiny, Legolas and Gimli, and the Ents, living trees led by Treebeard. Frodo Baggins and Sam have a new guide for their journey to the Mount of Doom, the treacherous Gollum, a hobbit deranged by his lust for the Ring. The film climaxes with perhaps the greatest battle sequence ever filmed (Jackson shot 20 hours and then edited it all down to 25 minutes), the siege of Helm's Deep, where the forces of good defeat the vast army of monstrous uruk-hai. If all this sounds confusing, it really doesn't matter. Sit back and enjoy the captivating ride.

And marvel at how Jackson never lets the spectacular scale of the film stop the essential humanity of Tolkien's tale from shining through. Indeed, George Lucas has miles to go before he matches this scruffy New Zealander. As for me, Two Towers belongs to Gollum, quite simply the best computer-generated film character ever. And to Andy Serkis who gives Gollum his voice and movements (Serkis' body was then painted over digitally). If ever there was a case for an Oscar to an actor who is never seen on screen, this is it. Tolkien would have wholeheartedly approved.