The Long Harm Of The State

Everyone knows the case against Binayak is bogus, but Chhattisgarh will not let him have it easy 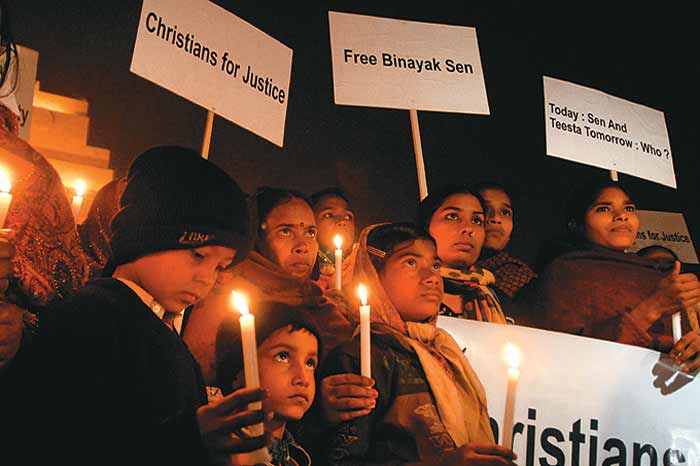 When the state decides to go for someone, a lot of energy, paperwork and determination is on display. The four chargesheets against Binayak Sen run into over 1,000 pages. Some 417 exhibits were presented in court. The defence team presented 56 documents. There were 97 prosecution witnesses compared to just 11 defence witnesses. During the arguments, both sides cited 70 different judgements.

Judge B.P. Verma of the Raipur sessions court came to the case just a year ago and the final arguments closed just a week before the judgement was pronounced. He apparently managed the feat of going through all the evidence and arguments and writing a 92-page judgement in just about a week. Activists accuse the judge of cutting-and-pasting the judgement from the police chargesheet and fir, but that remains only a speculation.

What is indeed a fact is that most lawyers believe any court would have thrown out the case. They say it cannot stick even in Chhattisgarh. But then Binayak Sen’s family has learned the hard way that the worst can happen in the emergency-like situation prevalent in the state. So the question is, what next? The family has, of course, moved appeal in the high court but now the question is how long it will take for the appeal to be heard.

Another option would be for the family to argue that justice cannot be delivered in the state and the trial be moved to another high court. This was done in some of the cases linked to the Gujarat riots of 2002. They were shifted to the Bombay High Court.

Sympathisers and friends of the incarcerated doctor say the trial is the punishment being meted out to him by the BJP government in Chhattisgarh. The state knows the charges will not stick eventually but they will drag the doctor through the process in order to make an example of him and put fear in the minds of others who would dare critique their methods and motives.

A Fable For The Cola-Wallahs