The Lion In Winter

Classic reissue, of import to both those from the Punjab and those whose lives it shaped 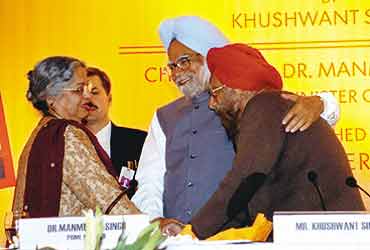 The Illustrated History Of The Sikhs
By Khushwant Singh
Oxford University Press Pages: 290; Rs 2,500
For 50 years, Khushwant Singh has towered over Indian writing like a colossus. Novelist, short story writer, historian, editor and journalist, above all an agent provocateur par excellence, he is impossible to ignore. The History of the Sikhs, written at Princeton in the ’70s in two volumes, is his seminal work. oup has now brought out a compact, illustrated version.

The birth of Guru Nanak on April 15, 1469, was an event of immense import for the country. Travelling constantly with Bala and Mardana, he debated with sadhus, sufis and yogis. His message was simple: there is no Hindu, no Mussalman. God to him was the truth, but higher still was truthful living. He accepted no division of caste, class or gender. He opposed Sati and all the oppressive practices of Brahminism. He discouraged yogic austerities, and asked people to live full and holy lives. The four gurus who followed him carried these teachings of humanism further. Guru Ram Das started the city of Amritsar around the temple; Guru Arjun compiled the Granth Sahib, containing the poetry of the gurus, and of the reformation sants like Kabir, Farid, Tukaram and Valmiki. Guru Arjun also became the first martyr of the faith at the hands of Jehangir.

The young Guru Hargobind (1595-1644) started turning the Sikhs into warriors, willing to defend themselves. In the Amritsar area, the Sikhs began to clash regularly with the Mughal army from Lahore. The ninth guru, Tegh Bahadur, became the next martyr in 1675 at Delhi by Aurangzeb’s orders. Guru Gobind Singh (1666-1708), only nine at the death of his father, transformed the Sikhs into the Khalsa, a Cromwellian commonwealth of fighters. On the Baisakhi day of 1699, at Anandpur Sahib, he created a casteless brotherhood by anointing the Panj Pyaras. He bowed before the five, and requested his own initiation. The guru was no longer their superior, and merged himself into a fraternity of soldier-sants. This new force in the Punjab, largely composed of the lowly, the dispossessed and the powerless, immediately clashed with the Hindu hill rajas, and the Mughal forces. The Sikhs won some, and lost others, but they put into the field a determined, bold, and fearless force. Henceforth, till Ranjit Singh took Lahore in 1799, there would be no rest for the Mughal government, in the swathe from the Indus to Delhi.

Guru Gobind Singh passed away on October 7, 1708, at Nanded in Maharashtra. Ranjit took Lahore and became king in 1799. The 90 years in between were of constant warfare. The Sikhs fought against the Mughals, and against the great Abdali during nine invasions (1747-1766). Immediately after the guru’s death, Yogi Lachman Das, named Gurubaksh Singh Banda Bahadur by the guru, came to the Punjab, defeating Mughal armies, destroying cities, and striking coins of Sikh sovereignty. Like a loose tooth, the Mughal rule was severely jolted. After Banda, the misls took over. They prevented Abdali from getting a foothold in India, and after the Maratha defeat in Panipat even rescued the women. Weak Delhi regimes parleyed with the misls. They practically became masters of the area up to the Ganga-Jamuna Doab. They did not have the cohesion, or the organisation, to take power in Delhi, as they might have, and slowly faded back into the Punjab, as the British came up the Ganges.

Khushwant has sketched this turbulent period of north India, and the ultimate rise of Ranjit Singh, beautifully. The later history of the Punjab from 1849 to the present is squeezed into short, sketchy chapters. But even so the complex relationship between the Hindus, Muslims and the emerging Sikhs is vividly brought out.

This review is not a learned assessment of the thespian’s book but an excuse to celebrate him. He reminds me of two other great Indians: Morarji Desai and Nirad Choudhary. When Morarji was PM, I saw him work from 5 am to late evening, and then stand at his door erect, in starched white, to welcome us to a dinner with him. Nirad Babu, of course, is a legend. Both batted on towards a century and beyond, each following his own health therapy. The Sardar is likely to beat the other two, with his rigid discipline of two ‘chhotas’. And when the call comes, he’ll insist on finishing his HT column, cap his pen, put it back in his pocket, and take the taxi to the heavenly doors. Within a week, he’ll become the editor of another HT, Heavenly Times, surveying the apsaras and the houris to decide which one makes his first cover. Sardara, Tera Jawab Nahin.