The Line Is Drawn

A new state is writ, the roiling continues 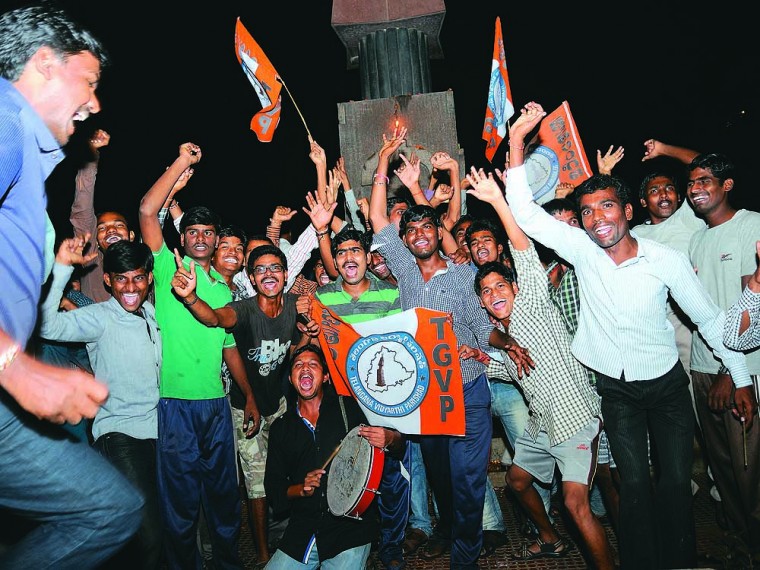 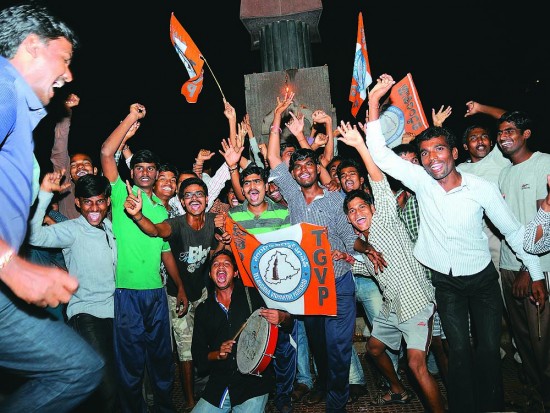 It came sooner rather than later. The Union cabinet has given the nod to the creation of Telangana, undeterred by the 60-day agitation against bifurcation in the restive Rayalaseema and coastal Andhra regions. The districts that will comprise Telangana are Adil­abad, Karimnagar, Maha­bubnagar, Medak, Nizamabad, Nalgonda, Ranga­reddy, Khammam, Warangal and, yes,  Hyderabad. Hyderabad will remain the common capital of the two states—Telangana and Seemandhra (Rayala­se­ema and coastal Andhra)—for 10 years.

As Union home minister Sushilkumar Shinde announced the decision, Seem­andhra protesters watched TV screens with disbelief. Reality, quite evidently, will take longer to sink in for the people of Seemandhra than the two minutes it took Shinde to read out the note.

Telangana supporters, on the other hand, are celebrating. Madhu Yaskhi Goud, a Congress MP, stepped out of the CLP meeting to announce that the Congress had delivered on its promise on Telangana. “Nothing is changing in Hyderabad. Citizens will lead the same kind of life with the same kind of security as earlier. I request all the politicians, including my Congress colleagues in Seemandhra, to stop misleading the people and focus on the future instead. It’s time to celebrate,” he said, beaming. 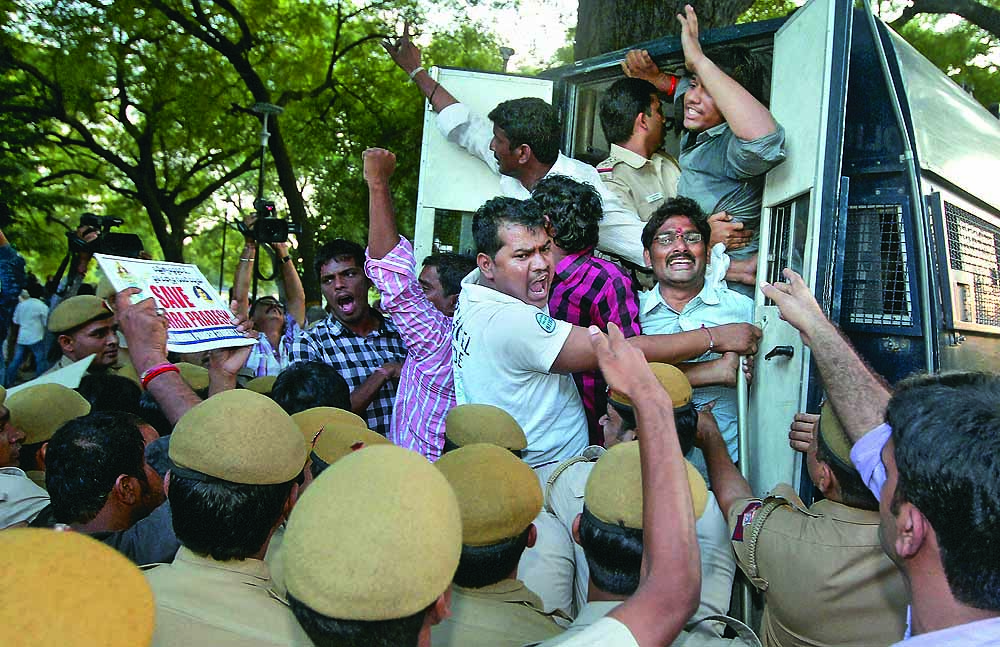 In Delhi, Congress workers from Seemandhra, who are against bifurcation of Andhra Pradesh, court arrest.

His appeal to party colleagues from Seemandhra is unlikely to be heeded. They have started resig­ning in protest. Chief minister Kiran Kumar Reddy, too, had projected himself as a champion of Samaikh­yandhra, or undivided Andhra, but the high command was unfazed. Perhaps aware that the Congress had no plans to go slow on Telangana, a section of Kiran’s cabinet—including nine from Seemandhra—have been holding their own meetings, chaired by finance minister Anam Ramnarayana Reddy, and atte­nded by PCC chief Botsa Satyan­arayana and Union minister K. Chira­njeevi. They have been the first to adapt to the change and support the Congress decision on creating a Telangana state.

Once the Union cabinet’s decision is conveyed to the president, the next step would be to send it to the state assembly. What would be interesting to watch is whether Kiran does step down and quit the Congress. If that happens, it would be Medak native deputy CM Damodar Rajanarasimha’s day of glory in the ass­embly when the bill is introduced.

The jubilation in Telangana was offset by flaring tensions across the 13 districts of Seemandhra, where people came on to the streets to voice their outrage. The newly freed YSR Congress president, Jaganmohan Reddy, was quick to call a press meet to rue the “sad situation that has bef­allen the state”. He lit into the decision in no uncertain terms, thus: “P. Chidambaram gave a hurried statement in 2009 on Telangana to coincide with Sonia Gan­dhi’s birthday and even now they are proceeding with similar rashness by giving the nod for bifurcation without a bill in the assembly. Both the Telugu Desam and the Congress have sold the state for a few seats,” he said.

By painting a conspiracy between his two big rivals, Jagan naturally aims to harness the anger in Seemandhra. Calling for the immediate resignation of all Seemandhra MPs, Jagan says his chief objective is to ensure that the UPA government falls and is unable to go ahead with this disastrous decision, “which will destroy Andhra Pradesh”.

Before that comes to pass, one spoiler may present itself in the form of a breakaway group in the Congress for­ming its own party in Seemandhra. This is very possible, if Kiran’s blistering attacks on the Con­gress are any indication. But as of now, the people of Telangana seem to be winning the match. Whether it is indeed the last ball of the match remains to be seen.

Taking Back Their White Card?