The Leap Of Faith 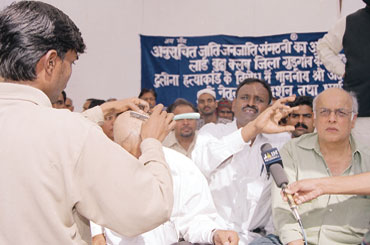 Says an angry Khairaliya, now Hussain: "I have read the kalima (a Quranic verse ). I'm a Muslim. I won't go back to the Hindu fold where we have been discriminated against. I was called, not by name, but by my caste in a pejorative fashion." As if the killings weren't bad enough, VHP leader Acharya Giriraj Kishore subsequently told journalists something to the effect that a cow being the "holy" mother was more precious than human beings—and Dalits at that. The VHP, however, denies that Kishore issued such a statement and has reasserted on its March '82 resolution to work towards an egalitarian Hinduism by crusading against untouchability and caste discrimination.

Hussain, though a trifle bewildered by his new status, says: "In a religion where mere cattle are more important than human beings, there's little hope for us. After all, we (scavengers) pick up the dead cows. We've worshipped them for years. The moral guardians of society and benign upper castes never show up when a cow dies."