The Law As A Samaritan

It's not enough to tell the persecuted about their rights; the law too must firm up 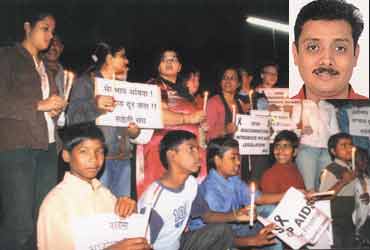 outlookindia.com
-0001-11-30T00:00:00+0553
Vimala was pregnant when she was diagnosed HIV positive. The virus was the only gift her alcoholic husband Ganpat, who had liaisons with sex workers, had ever given her. Yet, she was blamed for her condition. But Vimala would not give in easily. She realised that staying on in Kolhapur with her husband would only lead to her ostracisation.

The 31-year-old fled to her parents’ home in Pune. After months of care and medication her newly-born daughter was pronounced HIV negative. But Ganpat continued to haunt her for leaving him this way. She lived in constant fear until she met Pune-based lawyer-activist Asim Sarode. Vimala dreaded police hassles. So Sarode got the police to talk tough with Ganpat to keep him from harassing his wife. He helped Vimala file for divorce and got her a job with a social organisation. Today, she is raising her daughter all by herself. "I feel confident and have found a reason to live," she says.

"Being a lawyer isn’t about wearing a black jacket and running after money," says Sarode. "I always wanted to use law as an instrument of social change. Human rights offered an area that hadn’t received much attention." He has, since, helped commercial sex workers, the physically challenged, sexual minorities (gays, lesbians, transvestites, eunuchs) and the underprivileged resist exploitation by exercising their civil rights. He also fights for the rights of those behind bars and represents under-trial prisoners who can’t afford a lawyer. His regular practice funds his activism.

It was while attending a regional consultation on HIV/AIDS legislation at Mumbai in ’04 that Sarode began to appreciate the welter of social, economic and legal aspects of this health issue. He says even today, responses to HIV range from fear and denial to stigma and repression. Those affected are ostracised, criminalised and refused medical care, jobs and other basic rights. "The epidemic exposes the extent of marginalisation and inequality," he says. Under the Human Rights and Law Defenders wing of the Sahyog Trust, an ngo, Sarode started a legal guidance centre in Pune in ’05 and single-handedly provides free counselling and support to the HIV/AIDS-affected from lower socio-economic backgrounds.

Sarode’s mobile number has become a 24-hour helpline for people in distress. He drafts notices, letters and petitions for the affected and fights for their property rights. He is now helping an Ahmednagar-based HIV-positive couple, both one-time national athletes, adopt a child. In a day’s work, the 33-year-old makes many trips to police stations, often at unearthly hours, fields questions like whether sharing a toilet with an HIV-infected causes AIDS and braves snide remarks from peers and assaults from those angered by his work.

Sarode says official AIDS statistics are often misleading since many hide their disease out of fear. He is convinced that legislation alone can arrest HIV-related discrimination, which pushes the epidemic underground and impairs our ability to limit its spread. "It’s time the government accepted its responsibility towards the HIV-affected," says Sarode, who is an advisor to the National AIDS Research Institute, Pune.

Law students and lawyers are gradually coming forward to help him. But what is most difficult is to get the affected people to open up. "There are few who can talk on HIV and law in vernacular languages," he rues. Featured in BBC World’s Yuva Star documentary series for his commendable work, Sarode has also trained social workers, doctors, and programme coordinators from Pathfinder International, supported by the Bill and Melinda Gates Foundation on HIV’s legal and ethical issues. He now wants to expand his support network to every district of Maharashtra.