The Last Yard Of Mysore Express 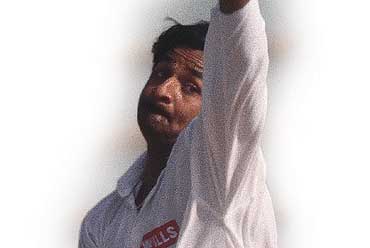 outlookindia.com
-0001-11-30T00:00:00+0553
I joined the Indian team in 1994 and before I made my Test debut (against England in 1996), I had already played about 30-35 one-day internationals. The first opportunity, thus, to open bowling with Javagal Srinath (in Tests) came when we toured England in 1996. It was indeed terrific to bowl along with him—Srinath was an experienced Test cricketer, and had just returned after playing county cricket in England. He was well-versed with the English conditions and it helped me a lot to know beforehand, courtesy Sri, about the wickets and the balls used there. I learnt a lot from him during that tour and went on take 15 wickets in three Tests, including five in one innings at Lords. We toured South Africa after that, and this time too both of us did extremely well—Srinath took 18 wickets, and I got 17.

There was always a healthy competition between us and both of us respected each other's abilities. All through, between 1994 and 1996-97, I shared the room with him whenever we were touring. But after '97 he moved to a separate room as a senior member of the team. Srinath is a terrific human being and I missed him a lot during the 1997 West Indies tour which he had to skip and return home with a shoulder injury. If he was around, I am sure we could have won a couple of Tests in that series.

Srinath, for me, is the fastest bowler India has ever produced and it's no mean achievement to take 200 plus wickets in Test cricket. I would place him in the same league as Alan Donald, Shaun Pollock or Glenn McGrath. Being a fast bowler, playing in India and getting so many wickets is no mean achievement—it is not easy to bowl on our tracks and take wickets.

Add to this his amazing sense of humour—both Srinath and Vinod Kambli would have us laughing our guts out everytime we were touring. I never had a dull moment with Sri. It didn't matter to him whether we were inside the room or on the pitch—his mere presence was enough to cheer a lot of us. I still fondly remember all the jokes he cracked everytime we had a partnership growing. I liked that a lot. He was a good team man and would support the bowlers at team meetings.

One really needs to know Srinath to understand him. He had his own unique ways to lift the spirits of any dejected teammate. Only he could do it and it was amazing. And whenever he himself was down, he'd play old Kannada songs by P.B. Srinivas. After we moved to separate rooms, he'd often call me over in the mornings and play those songs. In between sipping the tea he used to make for me, we would listen to these meaningful songs and spend hours. He also had a huge collection of rap CDs and used to carry some of them on tours.

On the field, his never-say-die spirit inspired all of us. He was never the one to give up easily—he'd bowl with the same fire and zeal even towards the end of the day. When I came to Tests, he used to help me a lot with his tips on bowling to a particular batsman and a number of other things. Later on, as I gained experience, we used to talk at team meetings about how to have a go at a batsman.

I think he liked the wickets at Calcutta and Mumbai. I would say that it is a sign of his greatness that he never rubbished any player as average—for him every player was the same. He was cool and would not swear at a batsman but I was more aggressive and do something every now and then to rattle the batsman. Pace was his strength and when he got to know that he had to pitch up a little more than he was doing, he got a lot of wickets. I saw him do this during the last tour of South Africa.

Everyone in the team would call him 'Sri' or 'Javi' but there's one interesting name he got from Bob Simpson. When Bob was the consultant during the '99 World Cup, he used to call us the 'Bangalore mafia' because we were four or five in the team and Srinath was called the Don.I guess he liked it. He actually talks a lot compared to the rest of us. Srinath is religious, believes in God and prays regularly. But he is not superstitious. I am superstitious and always put my right foot forward, while boarding the bus or stepping on to the field.

I am trying to stage a comeback and am sure I will. But when I do, I will miss him. I spoke to him the same morning he announced his retirement from Tests and he said he could not motivate himself to bowl. When you reach that stage, it is difficult to carry on.

But I must tell you this—he told me about his decision to retire in a jovial tone and didn't at all sound sad. I will be happy if he could be persuaded to play for some more time. I think he could have played one more year.