Hoping the worst is behind them, Cola majors move on to win back consumer trust Updates 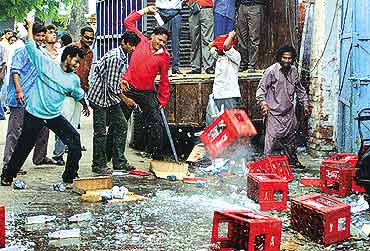 outlookindia.com
-0001-11-30T00:00:00+0553
The cola giants are yet to live down the pungent fizz of the pesticide controversy. Initially, stung by the Centre for Science and Environment (CSE) report that the soft drinks contain toxic elements, both Coke and Pepsi resorted to aggression. They followed the maxim "attack the attack", moved the courts, and stoutly defended their position that all colas were safe. But last week, their tenor changed. They were more cautious, almost hoping that the whole thing would die a natural death and they could go back to business as usual.

Suddenly, the cola majors seemed more worried about dipping sales, consumers' ire, and their image and credibility. Their concern also stemmed from the fact that the controversy could spread to other markets; already Nepal has ordered testing of Coke and Pepsi samples. So a visible shift in strategy was visible on all fronts.

The first one happened in the courts. While challenging the CSE's testing facilities in public, Pepsi withdrew the charges of "mala fide intention" against the ngo in the Delhi high court. Instead, its plea was that the government not act on the CSE report and independently test the soft drink samples. Obviously, Pepsi was worried about the decision of the Canteen Stores Department (under the defence ministry's aegis), which acted on the report and banned sales of soft drinks mentioned in it. And it was also concerned about the ban on its products in Parliament after the CSE went public with its charges.

Says Sunil Gupta, vice president (public affairs & communications), Coke, "We continue to believe that a consistent professional testing protocol is necessary if the interests of consumers and beverage manufacturers are to be jointly served." The court refused to lift the ban on sales. But it ordered the Centre to form a committee to conduct independent tests by picking up cola samples from across the country and submit a report by September 22.

Yet another reason for the withdrawal of legal threats against the CSE was that Pepsi realised it may not succeed in bringing the equivalent of what is known as a Strategic Lawsuit Against Public Participation (SLAPP) in the US. Such lawsuits, where rights of individuals or institutions to bring matters of public interest to their notice are questioned, are common in the US.

The other key strategy: Pepsi spokesperson Annie Cyriac admits that the company's focus now is the consumer. The fallout of the controversy is showing on sales. While the hospitality industry is playing safe by not serving colas indiscriminately—some clubs and restaurants in Kolkata have taken them off their menus—the airlines are serving them only on request. Several prominent schools in the metros have already banned their sale.

While in Kerala sales are believed to be down 75 per cent, the figure for greater Kolkata is 60 per cent. In Chennai, food supermarts like Foodworld claim sales are down by 40 per cent, but the decline in Delhi seems to be lower. At Delhi's pvr Anupam multiplex and the Greater Kailash McDonald's outlet, we found youngsters carrying away cola from dispensers as usual. Prianka Prabhakar, a third-year science student at Gargi, shrugs: "I'm a cola addict and nothing in the world can stop me, all my friends are drinking it."

While the companies admit to the drop in sales, they think it's a combination of the pesticide scare and the monsoons, which signify the end of the peak season. Says Pepsi's Cyriac, "Sales have dropped, but the worst is behind us." The trade agrees. J.S. Bindra, a major soft drinks distributor in New Delhi, claims the impact on sales is no more than 10 per cent. "We used to supply soft drinks to dps, Mathura Road. It banned them and tried to push flavoured milk. But the children aren't interested in milk," he says.Another cola distributor feels sales will pick up again once the controversy dies down.

However, the cola giants cannot take it easy. For, companies that sell fruit juices, concentrates, squashes, flavoured milk and flavoured sparkling water are cashing in. Says M.Y. Varma, executive vice-president (sales and marketing), Godrej Industries (foods division), "In the past 10 days we have seen a dramatic jump in the sales of Jumpin and Xs. In fact, we have sold in these last 15 days what we sell in the entire month of August. In India people do forget things fast, but I am sure this study will impact colas for a long time."

Coke and Pepsi are also trying to shift the plane of the debate. In fact, give it a kind of a "swadeshi" touch; that is, to claim that the entire controversy revolves on European Union (EU) norms being imposed on India. So, Pepsi Foods CEO Rajeev Bakshi has bitterly criticised the EU norms by saying Europe has a vested interest in creating stringent standards for products and services that could be used as a competitive advantage over developed world countries.

What that means is that if EU norms are forced on India, it won't be able to export most of its products. The safer option is to go for the more lenient standards laid down by the WHO. (The CSE report had compared the existence of toxic elements in soft drinks with the EU norms.) Echoes Prahlad Kakkar, the maverick maker of Pepsi ads: "The EU is under pressure from its farmers to stop products from our part of the world from entering global markets. By forcing us to follow EU norms it's ensuring we can't compete against them."

Now, with the international press picking up the story, the crisis is more about brand equity management than just sales. Image consultant Dilip Cherian explains that the immediate impact of this kind of bad publicity is dissonance. "The customers want to know if they trusted the brand too much and look for external agencies like the courts and governments to endorse it—this is not good for the brand," he says. Kakkar, however, is optimistic that the companies will tide over this whole thing, together. "You might see an ad, who knows, where Shahrukh and Aamir and the Coke and Pepsi CEOs walk hand in hand into the sunset," he jokes.

But nothing of this sort can happen before the government is dealt with. The Central Food Technological Research Institute (CFTRI), Mysore, where health minister Sushma Swaraj had sent cola samples last week, is expected to submit its report soon. Any action against the soft drinks giants will be based on the recommendations of the Food Products Advisory Committee after these tests are completed. The minister of state for food processing industries, N.T. Shanmugam, has said that the law does not allow immediate cancellation of licences even if the pesticide levels are found to be unacceptably high. Admitting the lack of sufficient standards, he said that this however did not give companies the licence to offer products and services not up to the mark.

Meanwhile, state governments like Kerala and West Bengal have been the most proactive in scrutinising colas. Besides, the colamakers are in trouble in both states over emissions from their plants and the Plachimada case has become a big issue in Kerala (see box). West Bengal's pollution control board has also confirmed that liquid effluents from two plants of Pepsi and Coke each contained cadmium and lead. In response, Sanjiv Gupta, Coca Cola India President and CEO, asserted in a letter to West Bengal Chief Minister Buddhadeb Bhattacharya that the drink is "absolutely safe".

In Maharashtra, FDA representatives visited all the six bottling plants in the state. The plants have been forbidden to dispose of existing stocks.Samples have been taken of the brands mentioned in the CSE survey and sent for analysis. Results are expected next week. Says G.S. Gill, secretary, food and drugs department, Maharashtra, "If we find an unacceptable level of pesticide concentration as the study suggests and if it is a danger to public health, we will go as far as stopping production altogether." But the cola giants are not too hassled with what the Centre or the state governments are saying. Says Pepsi's CEO Bakshi, "The least of my problems is the government, my focus now is to talk some sense into the media and speak to the consumer through them."