When the cliche "the end of an era" trips off the obits, make no mistake: it has. 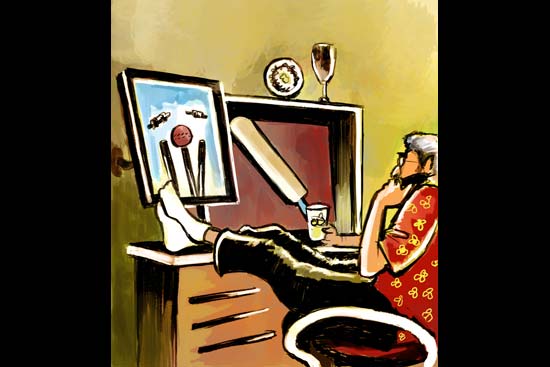 You are how you live

So much has been said of Vinod Mehta’s genius and quirks that it would have frankly embarrassed the man. But at precisely 3.25 pm on Sunday, March 8, 2015, he let the world see the real essence of his persona. As his lanky frame left his house for the final time—for the first time horizontally, after ‘Editor’ had squealed goodbye to his master—it struck not a few who had assembled that here was a true great of the profession, for 40 years the top dog, not being majestically carried out from a giant bungalow or an expansive farmhouse but being lowered carefully down the stairs of a two-bedroom, first-floor apartment, albeit in tony Nizamuddin East. At a time when the integrity of journalists has become a joke, that’s a powerful message to send with your eyes closed.

Not a Padma awardee, not a Rajya Sabha nominee, not an Ambassador or a High Commissioner, not a media advisor, not a member of a think-tank, not on any company’s board, the word was Mr Mehta’s most valuable asset. So when the cliche “the end of an era” trips off the obits, make no mistake: it has. The consumptive, flaunt-it-if-you-have-it attitude of modern, post-liberalisation editors was not his ken. For 17 years, he wore a Rs 400 wrist watch that Outlook gave its subscribers as a free gift. Till recently, he used a pair of suede shoes he had bought before reforms. He got himself a new car last year but smaller than his previous one and not fully loaded because it cost Rs 2 lakh more.

Even Mr Mehta would agree that he was a vastly changed man in recent years, that his famed “Bullshit Meter” wasn’t working as well as it used to, but some day Sanjaya Baru might care to explain just why he called The Last Great Editor ‘dubious’ in a Facebook post.

Seventy-three is no age to go, was a refrain commonly heard at the cremation. But this is not the way Mr Mehta wanted to go, after 102 days in two hospitals. Despite a two-decade-old heart condition, he enjoyed his food and drink and it was not uncommon to see a box of burger, Coke and fries outside his room. Two days before he checked in, he excused himself from a sandwich lunch claiming his doctor had told him to take it easy. The reason soon became clear: a masala dosa had been furtively ordered and delivered.

Food, the sound of it, the smell of it, the sight of it, always got Mr Mehta’s juices going. After a court appearance in Allahabad ended rather too quickly, yours truly suggested to the self-declared Congress ‘chamcha’ and pseudo-secularist that we could go to the historic Anand Bhavan, the family abode of Pandit Jawaharlal Nehru, before catching our train back.

“Anand Bhavan?” said Mr Mehta excitedly. “Sure, what kind of cuisine do they serve there?”

There were over a hundred journalists but not too many editors who had lined up to see Mr Mehta off but how many would he have really identified? Like the Times of India’s Sham Lal who famously failed to recognise his own assistant editor, Mr Mehta’s inability to fix names to faces was legendary. At The Pioneer, he couldn’t get his then assistant  Sashidharan Kollery’s name right, always calling for “the other guy, who doesn’t have a moustache”. At Outlook, he once danced with a pretty young reporter before proceeding to ask her, “So, where do you work?”

It wasn’t just the footsoldiers he couldn’t spot. At an anniversary party hosted by this magazine, he came back to report that “Ramachandra Guha is a bloody surly fellow, yaar” only to be told that he had gone and addressed Mukul Kesavan with a ‘Hi, Ram’. More recently, he ran into Naresh Fernandes, the editor of the website Scroll, at the Jaipur lit fest and barked: “Jerry [Pinto], I’m so glad to finally meet you.”

The ongoing World Cup was the first of which Mr Mehta did not watch a single ball. He was an acute watcher of cricket and merciless in his surmises. When the Pakistan-born leg spinner Imran Tahir made his debut for South Africa, there was plenty of buzz. It took just one over from Tahir, his first ball in international cricket actually, for Mr Mehta to conclude: “Bloody Ranji Trophy bowler.” After 16 Tests for his adopted country, Tahir now has 43 wickets at an average of 46.39.

When my partner-in-crime Aniruddha Bahal gifted a bat signed by the Pakistani wicket-keeper and whistleblower Rashid Latif, Mr Mehta proudly displayed the memento on his table. Soon after the match-fixing scam had been broken, a Congress politician walked into the office. Without batting an eyelid, Mr Mehta told him, “This was the bat with which Mohammed Azharuddin did match-fixing.”