A new book, a new wife, and the enigmatic master is still buzzing with ideas and opinions 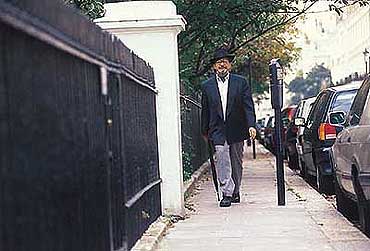 THE story goes something like this. At a fancy literary salon in New York—whose seductive contours shimmer the imagination of bibliophiles everywhere—a middle-aged lady is assiduously working the crowd in search of Ved Mehta. Wide-eyed, in a way only Americans can be, she is out to settle a wager. Her friend, who has brought her to this party, has told her Ved is blind; she, an admirer of his vivid writing, refuses to believe it so. Combing through the milling, cooing crowd, she eventually spots a delicately built Indian with a set face and steady eyes. Swiftly she arrives in front of him, and attempts to draw his attention. She gesticulates gently, then frenetically, flailing her arms about. The Indian looks on, unperturbed, unblinking. Just then her friend shows up at her elbow, a little embarrassed that her guest is flapping about like a startled rooster. "You're right," says the sceptic, pulling her arms under control, "He really can't see." "That," says her friend, "is not Ved Mehta. That, is V.S. Naipaul."

That story dates from the seventies, and could have some apocryphal elements; this one, from February 1998, does not. A correspondent and a photographer from Outlook, trawling Orissa on election duty, get to know that V.S. Naipaul is in Bhubaneshwar. Literate enough to be electri-fied by the information, they hotfoot it there, and tear up and down hotels to discover that he is staying at the Oberoi. They rush to the Oberoi and tear up and down its corridors, till they find themselves outside his room. In sheer awe, they knock. They are not disappointed; there is no mun-danity with the man. Sir Vidiadhar appears—literature is communing with hygiene—flossing his teeth; and even as the girls begin to tell him that they are journalists, he waves them away gently but unambiguously, "Go away, go away," he says, through the cleaning thread. "You are too young to have read my books. Too young."

A mere week later, young biographer and historian Patrick French gets a similar dose of Naipaul's famed Olympian disdain. In Delhi on a fabulous first commission from the New Yorker, arguably the world's most prestigious literary magazine, French meets up with Naipaul—his renowned but remote neighbour back home in Wiltshire—and is told, in Naipaul's lofty voice, as he is leaving, "Don't let the New Yorker worry you. Don't let it worry you. The New Yorker knows nothing about writing. Nothing."

In the age of number-crunchers, if the stories don't dazzle you, try the statistics. Naipaul, born in 1932, has to date written and published 23 books, with a quality net high enough to bother the best of most. Pre-dating the era of hype and publicity, he's won every literary prize—including the Booker, the Hawthorn-den, the David Cohen, the W.H. Smith, the Somerset Maugham Award—bar the Nobel, for which he is a contender every year. The entire toast of new Indian writing—Amitav Ghosh, Allan Sealy, Vikram Seth, Upamanyu Chatterjee, Rohinton Mistry, Arundhati Roy, Mukul Kesavan, Vikram Chandra, Githa Hariharan—have written 21 books of prose between them, and not one of the stature of A House for Mr Biswas. And Naipaul had written Biswas, one of the masterworks of twentieth century literature, by the time he was thirty, along with four other books.

It requires a special leap of the imagination to cast oneself back into the early fif-ties, and see young Vidiadhar, the descendant of indentured Indian labourers who emigrated to Trinidad in the middle of the last century, the son of a struggling journalist and writer; young Vidia (his ambition written into his very name) who had through hard study snatched the wings of an Oxford scholarship to flee the claustrophobic confines of clannish Indian life in Trinidad; young Vidia, laden with the neuroses of his background, wracked by the overvaulting quality of his ambition, desolately alone in England, with nothing to hold on to, no history, no family, no role model, no precedent; it requires a leap of the imagination, especially in an era of overnight fame and million dollar advances, to see the lonely young man struggling to find the words and stories that would somehow illumine the way out of the colonial tunnel, and help him ascend the peaks of English literature.

This he has done more conclusively than any other writer alive. And he has done it without any help, in the purest

fashion, by his books alone, without the oxygen of media hype, without the sherpas of publicity and marketing. He says of those years, "I was made really to suffer. It all seems very easy now. The books coming out one after another, but they were created with great anxiety, much suffering. I could have been given a much easier ride, but I wasn't, because of the time." In a way, a lot of the territory taken for granted by present day writers from the old colonies was first pioneered by him. And in many ways he still remains the best by far, a master. More than forty years after Naipaul wrote his first three books, Miguel Street,The Mystic Masseur and The Suffrage of Elvira, writers are still trying to capture the delightful tone of those original picaresques, and have been unable to do so. Naipaul was through with it in 1958, and has never gone back to it, moving on to an ever more serious engagement with the world.

Anyone who dismisses Naipaul has never read him, or has read him insufficiently. Or perhaps in precis, some interesting view of his simplified obscenely for mass consumption. He has many provocative views, and it's possible to disagree with them, but it's impossible to question his intent, and his seriousness; seriousness, not as in the absence of the comic, but as in the avoidance of the superficial, the frivolous, the false, the contrived. There are no cheapshots in Naipaul's writing; he approaches his craft with a monastic rigour, and amazingly no blandishments, commercial or other, cast a shadow on his 45-year-long career. His writing is always stately, complex ideas being rendered in uncluttered, perfectly-nuanced prose. Unlike most modern writers, he has not allowed himself to become a production for reasons of vogue or marketing. He remains a classicist, true to himself, and constantly on the move, ever in search of new ways of dealing with his material.

As far back as 1970 he used a series of different narratives to construct a novel, In a Free State, that won the Booker. In 1976, he wrote a travel book, India: A Wounded Civilisation, that was hugely analytical. And in 1981, after A Bend in the River, announced his retirement from the novel. He feels that "true serious fiction is really a very limited part of one's material, of what is inside one. " Basically by the eighties, Naipaul had begun to feel that the novel was incapable of processing the world anymore, that it had lived out its high tide. Consequent upon this, he has written two stunning books, The Enigma of Arrival and A Way in the World, books that are part memoir, part fiction, part reportage, and brilliant in the way they render highly complex ways of seeing. With his infinitely subtle gifts, Naipaul moves his fingers to cast images on the wall, and then shows you the patterns in them.

Inevitably, the high fastidiousness spills into his life, often to the amusement and irritation of his friends and acquaintances. Stories abound. Some apocryphal. For example, on his recent visit to India a rich woman asked him about the time he had forced a Swedish mission to change their entire decor to white as a precondition to accepting a dinner invitation. What is true is that he has a phobia about noise and dirt, and is averse to meat though he doesn't mind fish—apparently something to do with the way they look when cooked. What is also true is that he has a wonderfully lofty manner—and why should anyone expect anything less?—which involves the careful deployment of memorable lines and the use of echoing phrases, making his speech as resonant as his prose.

Of course he is prickly, a porcupine whose quills can, in a moment, spring up in defence or anger. But old friends say this happens less and less. A key reason is Nadira, the Pakistani Punjabi journalist he married a few years ago—the affair started in mythic fashion after Nadira asked him for a kiss on first meeting him, and Naipaul typically replied, "I think we should sit down".

An outspoken, sparkling woman of tremendous vitality, Nadira cossets him in her optimism and energy. At times she also exhibits a need to reinvent him. The former is a good thing, it brings joy to his life; the latter perhaps not. For Naipaul is an original. Anyone meeting him is aware of a certain nervous energy surrounding him. That peculiar unease is quite likely the spring of his talent, the pool of neuroses the great writing flows from. In 1960 it must have been brimming over when he wrote in A House for Mr Biswas, "How terrible it would have been...to have lived without even attempting to lay claim to one's portion of the earth; to have lived and died as one had been born, unnecessary and unaccommodated."

These words, it seems, have had a totemic ring in Naipaul's life, driving him to lay a very large claim on English literature; making him very necessary, very accommodated, literary canon. And one can safely report, as of his recent visit to India, there seems to be still enough left in that pool to further amplify that claim.