The Lady With A Candid Camera 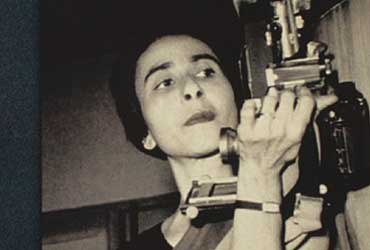 All of us are witnesses to the history of our time, but only a fortunate few are close enough to document its major players and chronicle its key events. These are photojournalists. Yet, proximity alone is not enough. It requires razor-sharp reflexes, keen anticipation and the gall to storm into places where the decorous fear to tread.

One such intrepid chronicler is the grand old lady of photojournalism, Homai Vyarawalla. Now almost 93, her professional career spanned three of the most decisive and crucial decades in India’s 20th-century history—1940 to 1970. In these 30 years, Homai lived in Delhi mainly photographing the political elite and their activities as a press photographer. She may not have been aware at the time that her work would become an important visual testimony of India’s transition from a colonised country to the Indian nation and its travails over the next quarter of a century.

Sabeena Gadihoke has done a painstaking job of putting together a meticulously researched and surprisingly scholarly coffeetable-sized book of Homai’s photographic odyssey. Actually two books in one, the first is a chronicle of contemporary history seen through pictures taken by a photojournalist who’s mostly as unobtrusive as a fly on the wall. It is also a story of growing up in a Parsi ghetto—an insight into a community that’s a micro-minority in our country.

Homai was not only the first but the only woman photojournalist in this entire period when press photography was considered an exclusively male domain. Not equipped with either a telephoto or a wideangle lens, she had to be either extremely close to her subjects or go great distances and heights to get composite shots. At one of Jinnah’s last press conferences before Partition, she decided to get top angle shots from atop wooden packing cases stacked up in a corner of the room. The packing cases gave way and she came tumbling down at the feet of Jinnah. His bemused response was, "I hope you are not hurt." Several years later when Gen Ayub Khan came to India as President of Pakistan, Homai took a photo of him with Nehru from her favourite low-angle position. Struggling to get up from between the legs of other photographers, the general noticed her and is supposed to have said, "How unchivalrous...not allowing the lady to get up". And a chuckling Nehru remarked, "That’s alright, that’s the way she works..." Homai remembers many such quips and asides of the personalities she photographed. All this amusing trivia and her own opinion of these leaders make the book a delightful browse. On Nehru, she says: "On Children’s Day I would notice the staff shooing away children of the less privileged. Of course, Nehru never knew that. He played with any child brought to him.... There was always a coterie around him, so he only saw what they wanted him to see...." On Lal Bahadur Shastri: "No minister or parliamentarian would have dared touch the prime minister, especially Nehru, but everybody here was putting their hands on his (Shastri’s) shoulders."

On Ho Chi Minh and Tito: "Of all the dignitaries, I liked Ho Chi Minh the most because of his simplicity and humility.... There was a huge difference between him and Tito (who) was a bit pompous and even had his assistant tie his shoelaces." There are few photos here that can match the poignancy of Sunil Janah’s pictures or the humanity of Cartier-Bresson or the historical import of Margaret Bourke White. Homai’s work is remarkable mainly as a documentary record of the period. It isn’t surprising that like most photographers of her time, her favourite subject was Nehru. She photographed him in his many moods. Some are iconic like the one of him releasing a dove or the charming picture where he is embracing his sister, Vijayalakshmi Pandit. Another picture that deserves mention is one of an ailing Nehru being escorted by Sheikh Abdullah shortly before his death in May 1964. It is invested with an unmistakable sense of irony and tragedy. Yet another set of pictures are the ones taken at the June 1947 session of the Congress that voted to accept Partition. Nehru’s tentative raising of his hand and the glum-faced Maulana Azad sitting in a posture of defeat are most telling.

The credit for making the book consistently interesting, informative and enjoyable goes to Sabeena. She has contextualised Homai’s work in many different ways: historical, political, social, anthropological, gender, class etc. But the earnestness sometimes shows. All in all though, Sabeena’s documentary filmmaking skills have been put to good use.