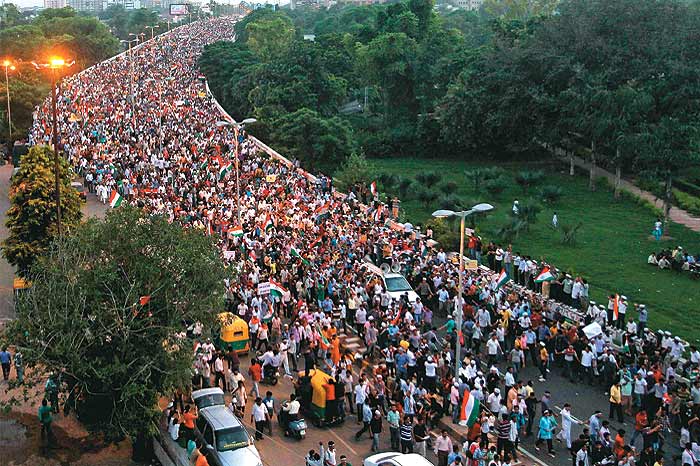 In the ideational foundry of Delhi’s Ramlila Maidan, which is aglow with the searing heat of a popular discontent against corruption, new notions of citizenship have been forged and those old recast. No doubt, these ideas have not acquired the requisite tinsel strength to not shatter under the gargantuan, and contradictory, pressure of our politics. Yet, it can be said without qualification that, in the open school of democracy at the Ramlila Maidan, where contrasting ideologies clash and their votaries intermittently stroll in and out, the idea of a new Indian citizenry has been midwifed.

The personality of the new Indian citizen, though still nebulous, can be outlined—she and he have cast away the apathy of the past to become remarkably assertive. They believe they must play the role of the watchdog of democracy every day, eschewing the tendency to reduce it to a ritual performed every five years; they don’t think they should accept all laws Parliament frames—especially those not to their satisfaction; they don’t believe their representatives are their mai-baap; and, more significantly, they fervently believe in their strength and resolve to usher in the change they want to see around them. They are simply so many Obamas saying, “Yes, we can”.

Different glaciers of rage, each with a different name, melt into a torrent threatening to destroy all bulwarks.

In a sharp departure from the politics of the past two decades, the new citizen accepts the existence of divergent views and beliefs in a pluralistic society. He and she believe that in the open school of democracy, different speakers espouse a bewildering variety of worldviews and it is for the people to choose what they wish to subscribe to. They seem to understand that the suffering and anguish of a people bind them in deeper and more enduring ties than ascribed identities. This holds out the hope that they perhaps could imbibe the spirit of empathy for those from groups more marginalised than theirs. The new citizen is willing to listen, learn and set aside the goggles of the past through which he and she have been perceiving the present and wear those more suitable to 2011.

It is August 21, a Sunday, and I’m wending my way to the Ramlila Maidan, oblivious about the existence of said foundry, as also about those working in it, other than the handful who comprise Team Anna. The road bustles with people—wearing their Anna topis and waving the tricolour, they chant a medley of slogans to create an incomprehensible din. As I mingle with the throng, engaging in snatches of conversation here and there, I seem to become, in my quest to fathom the flow of inexhaustible energy, the proverbial eye in the sky.

From up there, I see different glaciers of rage, each sporting a different name—bribe, price rise, land appropriation, high college fees, unemployment, low wages et al—melt into so many mountain slipstreams that pour into a torrent of water hurtling down, threatening to smash through any bulwark erected in its course, and discovering the depths of its own fury and majestic power. It’s a sight quite enchanting, mesmerising and humbling. It’s also a sight quite frightening—it has demonstrated the propensity to overflow the ‘banks of the Constitution’, recognising no will other than its own, and threatening to drown out those wishing to tame and control it. Shades of anarchy? A madness with no method? 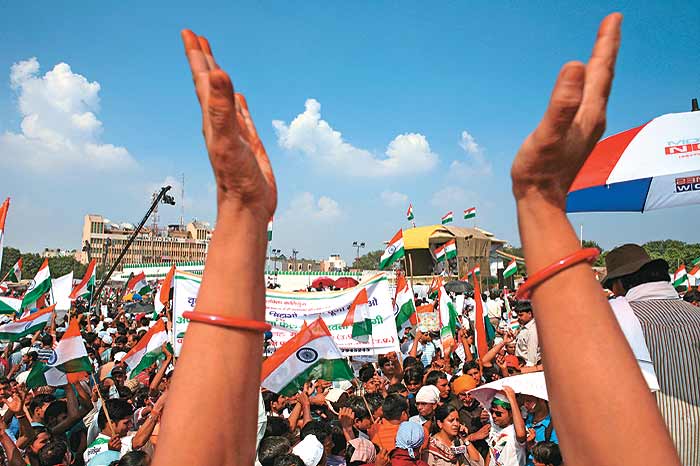 To sites such as the Ramlila Maidan, we often venture with preconceived notions—formed by our own experiences and those of others, further defined and distilled from the images 24x7 TV channels beam. I am aware of certain pet theories about the Anna movement—that the urban middle class dominates the movement, that the RSS has mobilised the crowds in the hope of wresting the Uttar Pradesh assembly from Mayawati’s control and launching a final assault against the UPA in 2014. The crowds, it is said, comprise reactionary Hindu communalists virulently opposed to Muslims, OBCs and Dalits.

As I saunter around the Ramlila Maidan, I come across a man who carries a banner proclaiming himself as a Manuwadi revolutionary, and a group of people handing out pamphlets advocating the chanting of the Gayatri mantra. There are men who pose as Shankaracharyas, their bodies sheathed in a layer of mud. Cries of ‘Vande’ are followed by a chorus of ‘Mataram’. It is also impossible to ignore the groups vociferously chanting, “Inqilab Zindabad”.

At one of the gates to the Maidan stands human rights activist Gautam Navlakha, a veteran of many battles against the state, distributing pamphlets of his own. “You, here?” asks someone. His response was prompt: the Anna movement has opened wide the shrinking space for protesting against the state. He understands the inherent dangers of the movement. “On the stage are progressive people, there are RSS volunteers in the crowd. But there are also many others with different ideological inclinations. If you go by the JP and Bofors movements, you can say that the BJP would benefit electorally.”

Walking past Navlakha, hearing some staid speeches and muted applause, the sultry Sunday afternoon becomes magically transformed as Narmada Bachao Andolan (NBA) leader Medha Patkar takes the stage. The massive crowd, growing in number hourly, goes into a frenzy as Patkar nimbly flits from one topic to another, launching a sally against the state’s hubris and then linking corruption to land, forest and Dalit rights. She asks the people to take an oath, “We will not indulge in corruption, nor will we allow corruption.” And then she delivers the punchline that no TV channel dared telecast: “They proudly crow that the Ambanis earn a lakh of rupees every minute, but the same people remain silent to the farmers committing suicide.” The applause is deafening. It causes me to wonder about the media’s agenda, about its insistence on projecting the Anna movement as being driven by the middle class focused on the solitary issue of corruption. Really, could this be the place where reactionary forces outnumber those radical? As if in response, a college student, in jeans, smirks and says, “This Medha, she will kill growth.”

But here there are multiple stories and a medley of ideas. A journalist narrates a conversation she had with OBC students from Uttar Pradesh. Enrolled in Delhi’s Zakir Hussain College in the general category, these students believe that the principle of preferential treatment should be preserved to uplift the poorer castes, and that, yes, the juggernaut of corruption has crushed them too. Kajal, who was trained as a yoga teacher in Munger, Bihar, speaks of how three men attempt to misguide a Muslim, whose identity is obvious from his attire, beard and topi, that the Jan Lokpal bill will deny him reservation. They are immediately accosted by another group; a verbal battle ensues. “It’s nonsense,” they counter. “Muslims have the same rights as us.”

On another day, at another hour, the crowd outside and inside the Maidan seemed to have mutated—there’s a greater presence of villagers and those from the lower middle class and even lower. They have travelled distances to reach the heart of Delhi. There are villagers from Karnal in Haryana, linking corruption to price rise; there are two drivers from the Tikri gas plant who have been laid off and want their jobs back; there are Muslims decrying Imam Bukhari’s description of the Anna movement as anti-Muslim. And whenever a speaker from the stage ends his speech with the cry of ‘Vande Mataram’, the master of ceremony echoes the day’s new clarion call: “Anna ke chaar siphai, Hindu, Muslim, Sikh, Isai.” I bump into a chartered accountant, an Aggarwal, who has come to express his solidarity with Anna. He points to his daughter and says, “They want Rs 14 lakh for admission in a management college.” Isn’t this an RSS show? Aggarwal shakes his head and says, “For a movement to succeed, it must be based on truth, public support, and religious harmony.”

The true test for the movement will be its ability to include the views of the different social groups outside it.

The scene is surreal near the dais—an old man sitting alone on it, shrivelled up, unshaven, frail, and a mammoth crowd watching and celebrating his indomitable will, his mulish stubborness. It’s here I bump into political scientist Yogendra Yadav, who’s waiting for his turn to speak, having belatedly joined the movement after an intense argument with himself about its ideological nature. On a recent trip through Haryana, he saw the movement widen to include social groups other than the middle class; of towns choosing their own small Annas and building a campaign against corruption around them; about the movement’s potential to encompass issues other than corruption. Yadav says he has come here accompanying a Valmiki group that has joined the movement.

But even before Yadav climbs the stairs to the dais, a succession of Muslim speakers take centre-stage. One of them belongs to an organisation representing backward caste Muslims and hails from the extremely poor district of Mewat. He tell the crowds, “Ramzan is the month in which we Muslims introspect and live a quiet life. But Anna’s call has aroused our fury. Corruption crushes us Muslims too.” He walks down the stage to field a question from a gaggle of journalists: what about Imam Bukhari? “Vote hamara, fatwa unka,” he remarks sardonically, adding, “he neither has zameer nor zameen.” From the stage, a Maulana reminds people that the Muslims of India had rejected Jinnah’s two-nation theory, that August 15, 1947, had fallen in the month of Ramzan, as has the Anna movement of 2011. Perhaps it’s our fault to unearth divisive issues in an agenda that is explicitly not exclusivist. Therein perhaps lies the test for the movement—its capacity to respond to criticism, as it has constantly sought to over the last 10 days, seeking to include different social groups outside it. 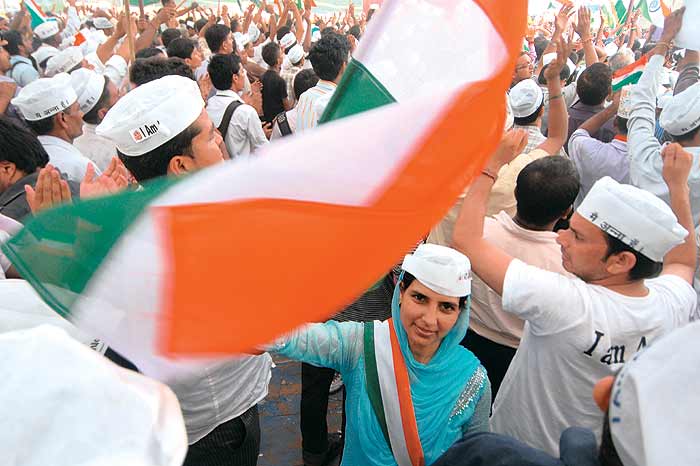 But nobody epitomises the new Indian citizen as does Mumtaz, a 25-year-old social activist from Mewat. She neatly delineates the nuances of the laws governing land acquisition, underscoring the State’s callous treatment of those who reside in villages, leavening her profound analysis with Urdu couplets she had written, each extolling the virtues of remaining socially united and challenging the people’s enemy—the arrogant, indifferent State. Mumtaz works the crowd into a frenzy more intense than even the nba leader as she chants, “Bharat Mata ki Jai”. Her mentor—the backward caste leader—says slogans coined in another historical context have been denuded of their earlier meanings. It is simply absurd to advance that the mere sloganeering of ‘Bharat Mata’ makes a Muslim guilty of idol worship, he argues.

It’s then that I know it in my bones—the Ramlila Maidan is now a site where thousands of wounds demand succour; it is where a million mutinies dotting the country have found expression; it is the vent through which the free-floating anger of India seeks release; it is the new seminary of politics where the new Indian is being defined and refined. May the new Indian citizen mature, beyond temporary defeats and victories.