Some netas always had a yen for the 'white line'. But no one could touch them. 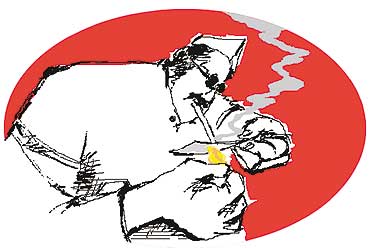 outlookindia.com
-0001-11-30T00:00:00+0553
In the world of the rich and famous, they call it "chasing the white line". The Rahul Mahajan case brought the focus back on cocaine abuse by the political and social elite, but officials still cite it as a "rare" exception. "As a matter of rule, big names never get named, let alone prosecuted," a senior drug enforcement official familiar with the case told Outlook. Mahajan Jr is the first big politics-linked name to be investigated in such a case. Rahul, he says, got embroiled because he broke two cardinal rules— only use cocaine that comes in vials, and never mix drugs, especially when heroin is involved.

Delhi's political class sports a few prominent names on the cocaine snorters' list. The names of a couple of recently-elected young MPs from the Congress and the wife of another young MP have come to the notice of drug enforcement officials. Others include an industrialist-turned-politician, a tycoon who also dabbles in politics and is a Goa regular and the sons of at least two cabinet ministers. Their names surfaced in recent cocaine-related investigations as also during intelligence-gathering operations which eventually led to recent drug busts in Delhi and Mumbai.

The investigation into Sahil Zaroo's involvement (he procured the cocaine laced with heroin for Mahajan and Moitra) have revealed his links with the party set in Mumbai and Delhi. Meanwhile, the peddlers rounded up by the Delhi police in the Mahajan case have apparently coughed up names of designers and top businessmen, part of their clientele in the capital.

In September 2005, when the Delhi Zonal unit of the Narcotics Control Bureau (NCB) picked up Dev Chopra from the Olive Bar & Kitchen, he was allegedly setting up a deal to sell 15 grams of cocaine for Rs 65,000. What surprised officials though was the clientele list in his diary. Predictably, the information was suppressed as it would have been a major source of embarrassment to many of our leading politicians. (Drug enforcement officials seem resigned to this, saying it's typical of all drug busts involving netas and corporate honchos.)

The names of a number of younger MPs have also cropped up. They are mostly from the same social background, have studied at foreign universities and move around in a close-knit social circuit. For politicians, it's not just connections that saves them. The security ring that most flaunt ensures they never get caught red-handed. "Chances are that before any raid the personal security will ensure we are delayed. That gives them enough time to flush away the drugs," says an official. Very often, tip-offs about 'rave parties' involving politicians are simply ignored. The law seems to work at two levels—one for the ordinary addict and pusher and the other for the privileged class.

'Mahajan Made Me? I Was Driving A Merc When He Had Nothing...'