The Ink Stark On The Paper 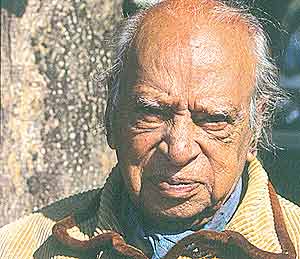 Mulk Raj Anand, who died on September 28 in a Pune hospital not far from his beloved farmhouse in Khandala, was quite unlike the other two founding fathers of Indian fiction in English, Raja Rao and R.K. Narayan. The latter chose to write in English because it was the language they felt most at home in, but Anand abandoned his mother tongue Punjabi for a different reason: he wanted to rouse the conscience of the British by writing in their language. He was an unashamed—even proud—propagandist.

It was a daring thing for a Peshawar-born son of a coppersmith-soldier to do: carve out for himself a writing career in English. But even before he graduated from Punjab University at the age of 19, he was determined to devote himself to writing. It was in pursuit of this dream that he decided to become a student in England, living hand-to-mouth as he hovered on the fringes of the Bloomsbury group. His political ideology was another passion, and he often proclaimed himself a communist writer.

His first book, Untouchable—the story of one day in the life of Baka, a toilet-cleaner—was rejected by over a dozen publishers before it finally came out in 1935. His critics said the writing had a strong flavour of the Punjab combined with heavy propaganda, going on to add that if wasn’t for the Left Book Club’s patronage, the book wouldn’t have seen daylight. But Anand brushed aside the criticism, continued to write steadily to produce nine novels, four volumes of short stories and over forty-five other books on art and history, besides two children’s books and a seven-volume autobiography that he left uncompleted.

Like many of the writers he admired in the UK, Anand fought against Franco in the Spanish Civil War and also worked as a broadcaster and scriptwriter in the bbc’s film division. Back in India after the war, he founded the Progressive Writers Association and remained its leading light until well into the ’70s. But till the end—he died three months short of 100—he remained true to his first passion: writing that battered the conscience of the privileged.