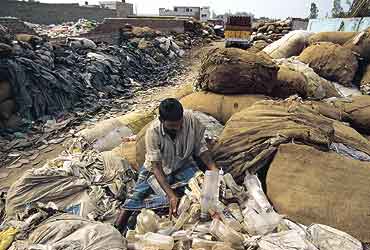 Plastic has become the modern world's most versatile man-made material. But it's also its worst environmental nightmare. The use of plastic has been roundly condemned the world over by environmentalists and there is a vigorous campaign to limit its use. It is non-biodegradable, hazardous and drastically toxic. But the NDA government seems to have conveniently ignored these glaring facts. Or, how do you explain the Draft National Policy on Petrochemicals submitted to the cabinet by the ministry of chemicals and fertilisers, which aims to "raise its consumption more than three-folds to make India the third largest plastic consumer by 2010?"

The Draft National Policy (a copy of which is in Outlook's possession) makes a strong case for the use of plastics and synthetic fibres. Since India's per capita consumption of polymers is 3.6 kg per annum, when the world average is 24.6 kg, the task force which framed the draft policy would like to see the per capita intake raised to 12 kg by 2010. And this, it says, can be achieved by setting up a special fund for "upgradation of plastic processing to reduce cost, improve quality and strengthen the manufacturing base". It also proposes that the Jute Packaging Materials Act (JPMA) 1987, which makes it mandatory to pack foodgrains and sugar in jute bags, be scrapped. This, the policy says, will provide a ready market for plastic woven sacks.

In fact, the ministry's draft note is not short on praise for plastics. It says:


But what about the environmental damage? The policy puts all the blame on the consumers and not on...