The Congress, in its chase for alliance partners in the North, finds a fickle BSP Updates 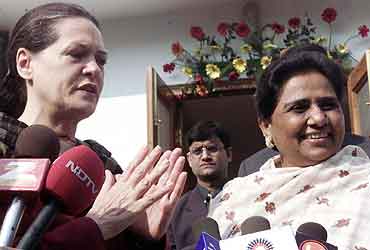 The Congress is palpably nervous but Mayawati is in no hurry. In fact, she retired into a shell for four days last week, fuelling speculation that she will wait until the Lok Sabha is dissolved before arriving at an open understanding with the Congress. The Congress leaders' rationale is that she would then feel less vulnerable to the machinations of the central government. Yet another interpretation is that UP is currently in a state of political flux with the future of the Mulayam Singh Yadav government uncertain and she'd rather wait for things to settle down.

Kept off balance, the Congress sent out mixed signals in UP, first laying the groundwork for a withdrawal of support to the Mulayam government over a two-day meeting of the upcc in Lucknow. But even as party workers were clamouring for a parting of ways with the SP, AICC general secretary Subodh Kant Sahay declared that it would not withdraw support, for fear of pushing the Samajwadis into the welcoming arms of the nda. Some Congressmen saw the move as a strategic necessity while others felt it was an avoidable display of brinkmanship. Yet others saw it as confused thinking.